We awoke with the sun bright and early at the Eucla Motel Hotel and Caravan Park, unsure as to what the time actually was, given Eucla, unlike the rest of WA, runs unofficially (although apparently universally accepted) on the Central Western Time Zone. We had crossed into WA the previous afternoon, just 12km to the east. Our smartphones were very confused by this, as were we. But by what we determined to be 6.30am, the campground had virtually emptied and since we had a good 608km to get to our day’s destination at Fraser Range Station, we weren’t that far behind.

After the previous day’s Nullarbor highlights, the drive between Eucla and Fraser Range looked comparatively less exciting, although I reckon if you keep your eyes peeled there’s always something to keep you entertained on the road! 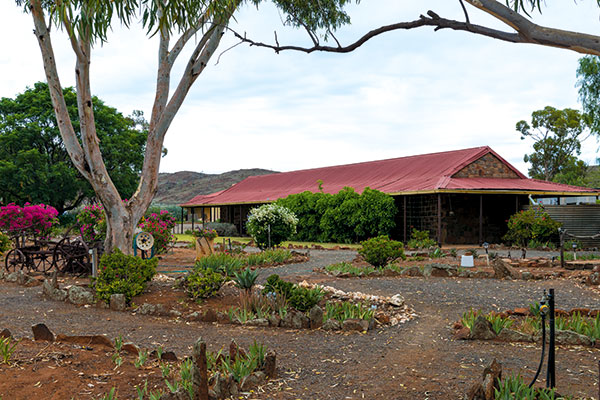 About 160km down the highway we came across the sign for the Caiguna Blowhole. Considering we weren’t on the coast anymore, this piqued our interest, so we pulled off the highway to check it out. It turned out to be part of the extensive karst Nullarbor cave system and what this particular hole blows is not water, but air!

The blowhole has formed from weathering of the cave’s underground cavities and while it doesn’t look particularly spectacular from the surface, when you get up close you can feel the cool air flowing up from underneath. This is the cave ‘breathing’ – out as the air pressure falls and in when it rises. Apparently the speed of breathing is relative, in part, to the size of the cave’s opening and this particular opening is pretty small. Some Nullarbor caves are supposedly quite vigorous in their breathing, with movement at one cave entrance measured at around 72km/h. I couldn’t tell you what speed this air was blowing at, but it was enough to send our hair flying, and leaning over the blowhole was kind of similar to standing in front of an air-conditioner – very pleasant given the day was already hot!

A requisite ice-cream stop was scheduled for the next roadhouse at Balladonia, but first we had to tackle what is reportedly the longest stretch of straight road in Australia – the 90 Mile Straight. This blessed 146.6km of dead straight road is enough to test even the most patient of drivers, but the promised ice-cream at the end kept us going.

Like many of the roadhouses on our journey, Balladonia has its own, unique point of interest – being one of the places the fiery pieces of Nasa’s Skylab Space Station came crashing to earth back in 1979. Like I said, there’s always something to keep you interested out here! The Balladonia Museum at the hotel-motel and roadhouse complex is the place to learn more about this anomaly – a worldwide sensation at the time.

HOME ON THE RANGE

Another 90km to the west and rising up out of the western edge of the Nullarbor Plain, Fraser Range’s rolling granite peaks signify a stark contrast to the flat terrain we’d travelled over the previous hours. This ‘oasis’ in the outback is a welcome retreat from the road and offers weary travellers a range of facilities.

Fraser Range Station was settled back in 1872, making it the oldest station on the Nullarbor. Although Fraser Range, along with many other Nullarbor stations, was previously a sheep station, today the sheep are no longer, mainly due to problems posed by the wild dogs that rove the countryside.

Caravan park manager Adrienne Verburg told us Fraser Range Station’s land had been rested for six years since the sheep last grazed and since current owner Ben Holman took over the half-a-million acre property. Around 150 head of cattle now roam instead, with more planned to join them.

We took a break from the motorhome and settled into our rooms in a row of ‘dongas’, just one of the accommodation options on site. In addition to an array of different-sized rooms accommodating singles, couples and families in the station’s beautiful old stone buildings, there is a two-bedroom and a three-bedroom self-contained house, plus a cottage on site, as well as a peaceful campground.

Pets are also allowed, although should be kept close by, as one of the highlights of wandering around the station grounds is meeting the numerous animals that roam freely here. Among them were a horse that was being followed intently by a calf, a pair of goats, chickens and the friendly station dogs, along with numerous wild birds that flock to the area. The galahs were particularly entertaining to watch as they vied for the chickens’ feed.

We set our alarms early, planning to walk to the nearby summit for sunrise but awoke to the sound of heavy rain on the tin roof. Luckily, it was a short shower and we headed off into the already warm morning as they sky turned orange, our thoughts on the king browns Adrienne had warned us also frequented the tracks. I think they were still fast asleep, though, as we only saw roos on our stroll.

The path meanders away from the main station grounds before winding up the sparsely vegetated granite hillside toward the summit. The height provides lovely views across the paddocks toward the hardwood eucalyptus forest that dominates much of the landscape and I’d highly recommend getting up there early to make the most of the morning light and to avoid the heat of the day.

After our walk, we set up at the edge of the campground for coffee and breakfast, and to relax and soak up the peaceful atmosphere. Movement in the campground was slow, our fellow RVers taking it easy and seemingly in no rush to move on too quickly. And that pretty much sums up the feeling at Fraser Range – you could easily stop for a couple of days, just to relax and enjoy the taste of station life so generously offered up here.