Squeezed between WA’s south-west corner and the well-known Pilbara and Kimberley regions in the north is the seldom-mentioned Murchison district.

Stretching from around Paynes Find in the south to just north of Meekatharra, east to Sandstone and Wiluna and west to around Gascoyne Junction, the Murchison’s boundaries are a little undefined and flexible, depending on who you talk to and which maps you look at.

The Murchison’s beginnings followed the discovery of gold near Cue on New Year’s Day 1892 by Mick Fitzgerald and his partner Tom Cue, after whom the town was named. 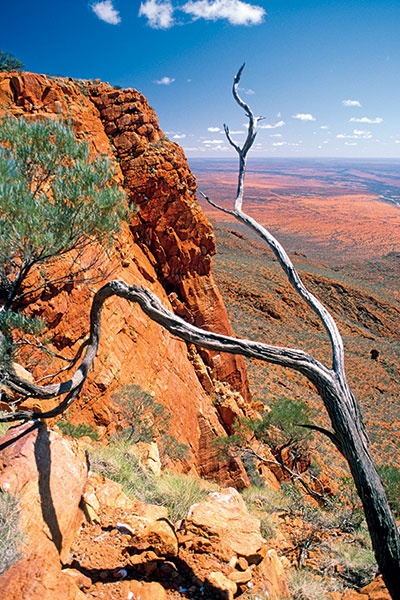 During those hectic gold rush days of the 1890s, the township became the administration centre for the whole Murchison region. A number of buildings constructed over 100 years ago are still standing and are classified by the National Trust. Several, including the original courthouse and police station, are still being used for their original purpose. Cue’s sister town, Day Dawn just a few kilometres away, once boasting a population of around 3,000, is now a giant quarry with the historic Great Fingall Mine Office, now the old town’s only remaining building, standing on the edge of a large open-cut pit.

Over a century ago, gold-hungry prospectors poured into this new ‘hot’ gold rush area, and in no time at all fresh discoveries were being made in all directions almost daily. Famous gold strikes like Big Bell, Peak Hill, The Hidden Treasure, Great Fingall, Tuckanarra, Garden Gully, Horse-shoe, Field’s Find, Lennonville, Quinns and Nannine saw tens of thousands come with their picks and shovels and scant supplies, setting up camps in the bush and in make-shift shanty towns and digging their way through the countryside in the search of that precious ‘colour’.

Today, most of these centres are abandoned, ghost towns of a bygone era. But with today’s high price for gold, the areas have been transformed into huge open cut gold mines that, with the use of modern technology, are churning out gold on a scale undreamt of by the ‘old timers’ all those years ago.

Modern-day prospectors waving metal detectors are part of a new wave of hopefuls coming to the Murchison and some are doing quite well, but gold isn’t the only thing luring visitors. Many other aspects are attracting hardy tourists: magnificent breakaway country, picturesque waterholes, giant granite monoliths, a 30,000-year-old aboriginal ochre mine (Wilgie Mia - 60km north-west of Cue), rock art, the chance to wander through old gold ghost towns or experiencing authentic outback life by staying on a station: outback farm stays on cattle and sheep properties covering a million acres or more, sometimes camping in revamped shearers’ quarters, in homesteads or on powered or unpowered campsites around the property.

As a response to hard times, pastoralists are finding that farming goats offers a good alternative income. Hundreds of semi-wild goats are regularly rounded up and shipped overseas where goat’s milk or meat is popular.

The whole region offers great exploring, bush walking and camping experiences not found in more accessible and publicised regions. Tourist numbers are still quite low and at many of the camp spots you’ll be entirely alone.

Nearby, on the northern edge of the Murchison is the world’s largest rock: Mt Augustus or Burringurrah, a monocline over twice the size of Uluru. This huge boulder, first found by European explorers in 1858, is mostly covered in low growth – unlike its stark, bald Central Australian cousin. Mt Augustus is 858m above the surrounding plain and 1105m above sea level, is around 16km long and up to 5km across. It’s estimated to be around 1700 million years old and like Uluru, sunset on the rock is a sight long remembered.

To the west of the main Goldfields region, the 43,800 sq km Shire of Murchison has a population of around 170, mostly rural station folk and is the only Shire in Australia without a town. Murchison Settlement comprising the Shire Office plus a Roadhouse/Caravan Park including motel units, is home to about 20 people. There’s also a rammed earth museum offering an insight to the local Yamatge Aboriginal people and pastoral and family histories in the district. The settlement also has a signposted 1km rangeland botanical walk and polocross fields where around 20 teams contest an annual carnival in July.

Nearby Bilung Pool and waterfall is a picturesque picnic spot with colourful cliffs and a deep permanent waterhole in the Wooramel River. Errabiddy Bluff outcrop offers a great view over the remote countryside and Wooleen Station is a popular station stay attraction – a working sheep property with plenty of outback scenery, wildlife, mountain bike and walking trails, as well as pet kangaroos and true station hospitality. Homestead and campground accommodation is available.

An interesting development in the Murchison, on the flat open countryside of the Boolardy sheep Station is the construction of over 100 powerful satellite dishes, after Australia secured part of a $2 billion project at the centre of cutting edge space exploration.

Australia is co-hosting this massive project with South Africa; known as the Square Kilometre Array, it includes the biggest radio telescope in the world and aims to unlock some of the mysteries of the universe, including its evolution and formation. Low population and radio quietness saw the region chosen for the low- and medium-frequency part of the Project most susceptible to interference: the area is at least 200km away from any form of mobile phone coverage.

Away to the west is the little-known Dalgaranga Meteorite Crater and just to its north is Walga Rock. This huge granite boulder, about 4km in circumference, contains some good examples of very old Aboriginal art, including a mysterious painting of an old sailing ship – some 300km inland from the coast.

Goldfields records show that around 1900, the bridge was wide enough for a horse and cart to pass over it. Much erosion has taken place in the past 100 years or so, and the width of the natural rock bridge is now little more than a metre. The formation, where softer rock has weathered away from beneath a hard surface layer to form a natural bridge, is part of a large basalt rock outcrop which is around 800m long, varying from 3-10m high and is believed to be around 350 million years old. Old-timers report there were many wild parties held there after the establishment of a nearby brewery and in those days the bridge was commonly known as ‘The Devil’s Arch’.

Today, Murchison retains roots in its gold-rich countryside, but nowadays the real riches of the region are brought in by tourism; for now it’s only a trickle, but a flood isn’t far away, with several Tourist Pathways being developed through the region, with names such as Wool Wagon, Miners and Kingsford-Smith Mail Run becoming well used.

One of Australia’s real jewels of the outback is being unearthed. Before the tourist rush really gets underway, take a meander through the Murchison and see for yourself what others have been missing for years as they rushed through here on the way to somewhere else!