Lying deep in the east Kimberley region, Purnululu National Park (NP) protects one of the world’s most remarkable natural wonders – the tiger-striped, beehive-shaped rock domes of the Bungle Bungle Range. Though just 300km south of Kununurra and barely 50km from the Great Northern Highway, this dramatic geological formation remained virtually unknown to all but the local Aboriginal people and a handful of pastoralists until it was revealed in a 1983 television documentary, filmed mainly from the air. Since then, it has become an icon of the Australian outback, hailed internationally for its unrivalled splendour, attracting nearly 50,000 visitors annually. Purnululu NP was established in 1987 and inscribed as a World Heritage Area in 2003.

The Bungle Bungle Range is an outstanding example of a cone karst landscape, and the spectacular Purnululu landscape we see today is the product of complex geomorphic processes spanning more than 350 million years. The deeply fissured plateau dominating the centre of the range comprises Devonian-age sandstone that has been eroded into a maze of sheer-sided gorges and slot canyons. On its western edge, seasonal waterfalls have carved numerous narrow gorges and deep gullies into the steep cliffs that rise abruptly from the arid savannah plains.

The park’s emblematic beehive-shaped domes are located on the southern edge of the plateau, unusual and visually striking with their orange and dark grey stripes. This regular, horizontal banding is due to differences in clay content and porosity of the sandstone layers. 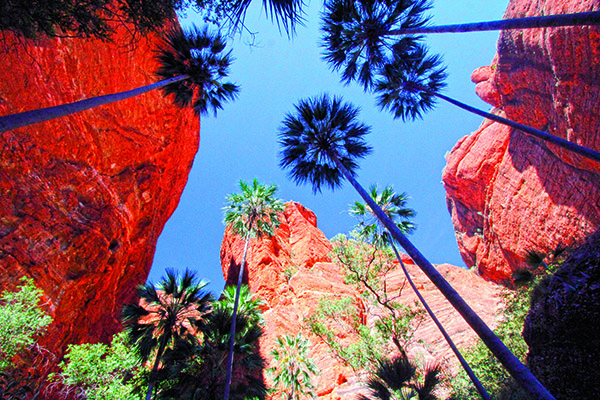 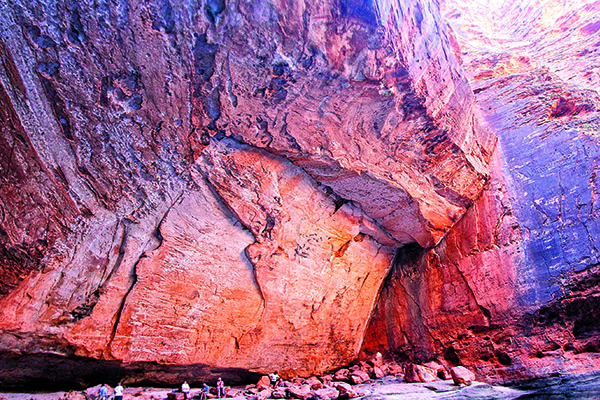 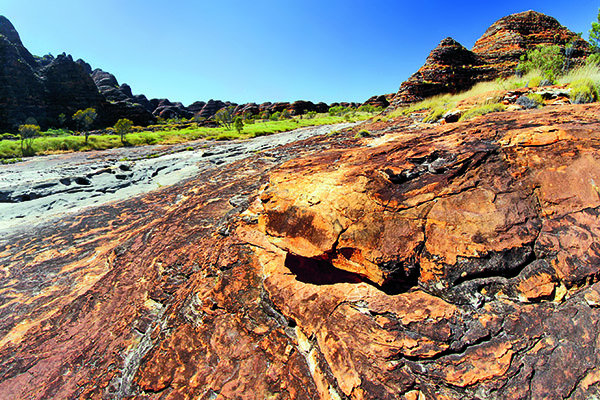 The region’s climate is characterised by a very hot wet season in summer, when thunderstorms dump between 500-700mm of rain that fills the gorges and channels with flowing streams. By contrast, the mild winter season (April to October) brings little rain and the watercourses shrink to a few permanent pools deep within the canyons.

The park’s vegetation reflects its transitional location between the northern tropical savanna and arid inland desert, with plant species ranging from ferns and towering Livistona palms in the moist, sheltered gorges to stunted shrublands of grevillea, acacia and spinifex in the dry uplands and surrounding plains. The great diversity of animals in the park also comprises a mix of desert and tropical savannah species.

The Kija and Djaru Aboriginal people have lived in this ancient landscape for tens of thousands of years, moving from the desert to the uplands in the wet season, to foothill pools after the rains and along the perennial rivers in the dry season. Rock art adorns several shelters, caves and gorges in the park, with hand stencils and depictions of crocodiles and fish, and there are many burial sites, all of which are closed to the public.

In 1885, gold was discovered at Halls Creek, bringing an influx of European miners to the region, followed by pastoralists who took up leases on native lands. The Kija people put up fierce resistance to this, killing livestock that overgrazed the natural vegetation, eroded riverbanks and fouled waterholes. In retaliation, they were subjected to punitive police raids and brutal massacres. The history of the Djaru people following white settlement mirrors that of the Kija.

By 1967, the Ord region grasslands had been used for pastoralism for over 80 years and erosion caused by overgrazing had begun silting up the new Lake Argyle, prompting the state government to create the Ord River Regeneration Reserve. The consequent limitation of stock numbers, and the introduction of award wages for Indigenous workers, led many station owners to expel Aboriginal stockmen and their families from pastoral properties, forcing them to settle in camps and refuges at Hall Creek and Warmun (Turkey Creek).

The relationship of the Kija people to the land, and their conflict with European settlers, has been strongly depicted by the Warmun artists, who emerged as a group in the 1970s and formed the Warmun Art Centre in 1998. These artists, many of whom enjoy national and international renown, paint their country and render their oral histories using mainly yellow, brown and black ochres, hand-collected locally.

To access this remarkable landscape, turn off the Great Northern Highway around 55km south of Warmun (108km north of Halls Creek) and traverse the Spring Creek Track for another 53km to the visitor centre at the park entrance. The track is rough, badly corrugated and crossed in numerous places by creek beds with steep entries and exits. Consequently, it is suitable only for 4WD vehicles and high clearance, single-axle offroad trailers, and only then in the dry season.

For the convenience of travellers who do not have 4WD vehicles or offroad-capable vans or trailers, the Bungle Bungle Caravan Park has been established near the junction of the highway and the Spring Creek Track. Owned and operated by the Mabel Downs Station, the facility offers 4WD bus transport into the national park, as well as caravan and camper trailer storage, and a variety of accommodation that includes safari tents, and powered and unpowered sites.

The park is open to drive-in visitors from April to December, but unseasonable rain may cause temporary closure of the park during this time. The visitor centre and camping areas close in mid-October.

There are two public camping areas and a number of tour companies that provide more up-market accommodation in the park. Kurrajong campground is 7km north of the visitor centre and Walardi campground is 12km south. Both camping areas have bush toilets and bore water but no showers. A third, commercially-operated campground, Bellburn, has facilities maintained to a higher level than the public campgrounds. Advance bookings are essential.

For sightseeing purposes, Purnululu NP can be divided into a northern and a southern section, each featuring several walks and a lookout that are quite different in character. They are described here in that order.

The car park for Mini Palms Gorge is 9km north of the visitor centre. This is a moderately challenging 5km (return) walk, which sets out easily enough along a stony creek bed through open eucalypt forest and acacia scrub. As it approaches the gorge, the trail enters a narrow defile bounded by sheer cliffs and littered with huge conglomerate boulders that all but block the way. To clamber over, under and around these obstacles provides a good workout as the trail ascends steeply to the first viewing platform, surrounded by a vortex of rocks and palms, and continues to a second platform at the head of the gorge with an awe-inspiring view into a high, narrow amphitheatre.

Echidna Chasm lies 10km further north and is one of the real highlights of the park. This moderately difficult 2km walk traces a sinuous path through a narrow cleft bounded by 200m-high cliffs that block out the sun, except for a brief window in the middle of the day. Depending on the angle of the sun beaming into the chasm, the conglomerate walls glow in a spectacular light show, changing from dark purple to brilliant orange.

Near the end, the walls close to within a metre before the trail enters an amphitheatre with a narrow slit in the roof looming high above the rock-strewn floor. Bench seats have been installed here for the benefit of walkers who wish to sit while their senses absorb the visual splendour around them.

Outside the chasm, a short detour leads to a lookout with panoramas of the rugged Osmand Range and the savannah woodland stretching across the Osmand Creek valley to another chain of hills, faintly blue in the distance. The views from the lookout are magnificent at any time of day, but are especially so in the early morning or late afternoon.

On the other side of the valley, an easy 10-minute walk from a carpark, 2.5km from the visitor centre, leads to the Walanginjdji Sunset Lookout with a 360°view of the western escarpment of the Bungle Bungle Massif. At sunset, these majestic, west-facing cliffs blaze brilliantly red and yellow against the darkening evening sky.

The Piccaninny Creek carpark is the starting point for a number of walks into the southern section of the park. The first of these is the Domes Walk, an easy 1km circuit among the famous tiger-striped beehive-shaped domes. The trail follows sandy creek beds and bare sandstone paths between spinifex and holly grevillea.

At the end of the loop, the Piccaninny Creek Walk branches northward on one of the most beautiful and rewarding excursions in the park, along a dry sandstone watercourse that has been scoured bare and is deeply rutted by millennia of wet season torrents.

The creek line is flanked on the west by a jagged ridge and on the east by a chain of spectacular domes. After about 1.5km, a path diverts to the right to the Sunset Lookout (or Piccaninny Creek Lookout) with a view through a gap between the domes over a spinifex-covered valley to an outlier of the Bungle Bungle Range.

Next to the domes, The Cathedral is arguably the most impressive of all the park’s natural marvels, and one of the easiest to reach. About 3km from the carpark, a spur track heads west along a sandy creek bed into Cathedral Gorge, a sinuous canyon between shadowy cliffs that loom higher and steeper to a terminus in a spectacular 100m-high cavern. To one side of this natural amphitheatre, a cleft in the cliff face hangs suspended over a perennial plunge pool, the rock darkly stained with water seeping from an unseen source, even in the dry season.

Back in the creek channel, the ‘trail’ continues for several kilometres before entering the remote Piccaninny Gorge at ‘The Elbow’. Beyond this point, a moderately difficult 30km hike requires overnight walkers to negotiate fallen boulders and loose rock and to rely on their navigation skills over a route with no marked trail, no reliable drinking water and no defined end point.

Purnululu NP is, without a doubt, one of Australia’s most unusual and spectacular geological landmarks, thoroughly deserving of its World Heritage status. It may be remote and not so easy to access as some other outback icons, but it will repay a resolute adventurer with memories that will last a lifetime.

Purnululu National Park is about 200km south of Kununurra. The access road turns off the Great Northern Highway, 55km south of Warmun.

The full article appears in Caravan World #553 July 2016. Subscribe today for the latest caravan reviews and news every month!