Pounded by the relentless seas of the Indian Ocean, the Western Australian coastline has been carved and sculpted into some of the most rugged, picturesque and dangerous coastline found anywhere in the country.

Death, hardship and tragedy have dogged this treacherous stretch for hundreds of years, dating back to the days of early Dutch explorers and traders who came to grief here as early as the 17th and 18th centuries. Unfortunate trade ships, mostly heading across the Indian Ocean in the prevailing westerly winds bound for Java, sometimes found themselves, due to poor navigation or sheer bad luck, slamming into the jagged reefs and rough coastline – violently drawing short their journeys.

Along much of WA’s coast, a sprawling broken reef line protects the shore from the ravages of the Roaring Forties and the ocean fury that builds up over thousands of kilometres. But it is on the ‘Blowhole Coast’, some 74km north of Carnarvon, that some of the most vivid reminders of this destructive coastline of misadventure can be plainly seen as, without the protection of this reef, the rough, savaged cliffs are fully exposed and are at the mercy of the sea. 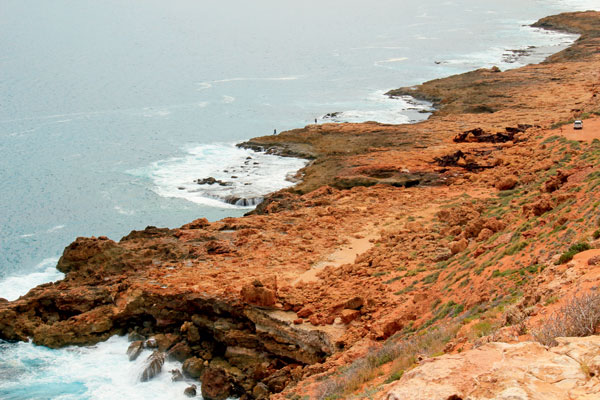 The dramatic coastal scenery is full of contrasts – of beauty and awesome power, of delicate corals lying in rock pools and huge swells that have smashed into sheer rock faces up to 100m high.

The Blowhole Coast has more than its fair share of centuries-old shipwrecks, including that of the well-known Batavia (1629), but much more recent dramas have also taken place here. The wreck of the 18,639t bulk carrier Korean Star, 104km north of Carnarvon, provides a still-visible reminder of the sea’s fury. In the early hours of May 21, 1988 she was slammed ashore at Cape Cuvier by Cyclone Herbie. The bulk carrier had discharged its ballast and, riding high at anchor, was ready to take on a load of salt bound for Japan from the Cape Cuvier Loading Jetty, when the late season cyclone hit with little warning. Without weight in the hull the empty ship was blown by gale force winds in heavy seas across the bay and on to the rocks. Luckily, the 19 crew members were rescued by the Carnarvon State Emergency Service rescue team without injury – a great effort indeed.

This infamous coastline also lays claim to Australia’s worst maritime loss – resulting from the sea battle between the Australian Navy’s light cruiser HMAS Sydney and the German Raider HSK Kormoran on November 19, 1941. The official story of the battle, which is based solely on the German survivors’ version, was that the Sydney had sighted the Kormoran and challenged her, the resulting battle sinking both ships.

Five days later, two boats containing 103 German survivors landed at Quobba and were brought into Carnarvon gaol. Another 213 survivors were picked up from lifeboats at sea. Around 80 German sailors were unaccounted for. No trace was ever found of the 645 officers and crew of the Sydney. Despite numerous enquiries as to what happened to the crew, and the discovery of the wreck sites of both vessels a few years ago, many theories still abound as to what actually happened.

At a site 7.5km north of the Quobba Blowholes, a simple memorial to the Sydney has been erected at High Rock on Quobba Station. The plaque on the memorial records details of the battle and the German landings.

The waters here are a mecca for big fish and enthusiastic fishermen. Huge snapper, trevally, spangled emperor, coral trout, queenfish, cobia, mulloway, barracuda and mackerel are just a few of the giants that lure fishermen here year after year to take their chances from rugged cliff faces to bring in the ‘big ones’.

They battle with high winds and sometimes dangerous seas and have to be quick enough to get their catches landed before the ever-present sharks take their hard-fought prize straight off their lines. One fisherman purportedly once landed ‘half a mackerel’ which weighed in at 14.5kg – the other half neatly bitten off by a shark before the mackerel could be landed!

A few years back, Cape Cuvier made the news with footage showing a feeding frenzy on tonnes of small bait fish. Huge sharks, cobia and other large fish were seen gorging themselves on a huge school of anchovies that were being herded against the cliffs. Locals report that such bait fish schools are a regular occurrence here, so there is potential for visitors to see such feeding frenzies in the future. Whale watching from the high cliffs along the coastline is also drawing visitors to this quite special north-west location.

Hidden away, about 1km south of the blowholes via a sealed road, is an ideal base from which to explore and experience this spectacular coast. Here on the beach at Point Quobba is a very special community living in harmony – a mixture of locals and campers who have all come to take in and enjoy the Blowhole Coast. Some squatters have had their shacks here for over 40 years and, in a somewhat haphazard arrangement, visitors to this lovely spot set up camp on any flat ground they can find.

Basic facilities here include a boat ramp (4WD on beach), waste collection bins and a sullage dump point. All campers must be fully self-sufficient and have their own chemical toilet facility. There is no firewood available, so campers are encouraged to come prepared with gas cooking equipment and their own supply of drinking water. A camping fee of $11 per person (concession $8 per person), per night is collected by a campground host and a maximum stay of 30 days applies.

The beach at Quobba Point is protected by reef and a small island that is accessible at low tide. Coral outcrops and colourful fish, crayfish, clams and shells are seen in the shallows of this picturesque lagoon.

Access to the blowholes is along a good sealed road leading about 50km off the North West Coastal Highway, north of Carnarvon. The bitumen finishes where the road reaches the coastline. From there, the main points of interest northwards along the coast can be reached along a mixture of quite good graded roads and fairly rough, corrugated tracks. Sandy 4WD trails in the area take visitors to other picturesque bays, cliffs and beaches.

Around 60km north of the blowholes along the coastal access road, an enthusiastic surfing community has taken up residence at Red Bluff. Here, along about 1km of beachfront, makeshift camps ranging from tents, old caravans, lean-tos and, in some cases, battered old panel vans with swags in the back, all represent temporary homes for the many surfers lured by the legendary waves at Red Bluff. Some stay for a few days, weeks or months. Others seem to have made Red Bluff virtually a permanent home. There is also the option of staying in comfortable eco-safari tent accommodation (with ensuite and kitchenette) here at Red Bluff, with panoramic views out over the bay.

Station stay and camping area accommodation (with generator powered sites) is also available at Quobba Homestead. Quobba Station is especially popular for the many keen fishermen who often come back here year after year. There is also old shearers’ accommodation here, as well as various cottages and chalets available.

The Blowhole Coast is a great spot to come and drop out of your normal busy world – for a day or two, a month or two, or even a year or two! And you’ll wonder why you haven’t done it before!

From Carnarvon, travel 24km north on the North West Coastal Highway then turn west on sealed road leading 50km to the coast. All roads north from here to Red Bluff and Gnaraloo Station are unsealed.