Crunching across shimmering salt flats, over gypsum dunes and up isolated ironstone ridges, a series of surprising, outback vistas tempts us beyond Kalgoorlie, WA, and into a remarkable region on the Goldfields’ northern fringe. This route, which links adventurers to Uluru across the Great Victoria Desert, provides passage to an unusual collection of outback wonders, clustered around the tiny town of Menzies.

On the rocky shores of nearby Niagara Dam, we chill out around a warming waterfront campfire, watching the sun dip and fade until the stars come out. It’s a ‘one-more-night’ kind of outback freebie that we share with just a handful of fellow travellers, their camps tucked among the mulga scrub, overlooking Niagara’s breezy oasis.

Nearby, where the wind whistles through Kookynie’s dusty streets and ghostly gold ruins, travellers and locals mingle over beers at the Grand Hotel while, a little further west, campers watch the sun set over a seascape of solitary, spirit-like figures stationed across Lake Ballard. 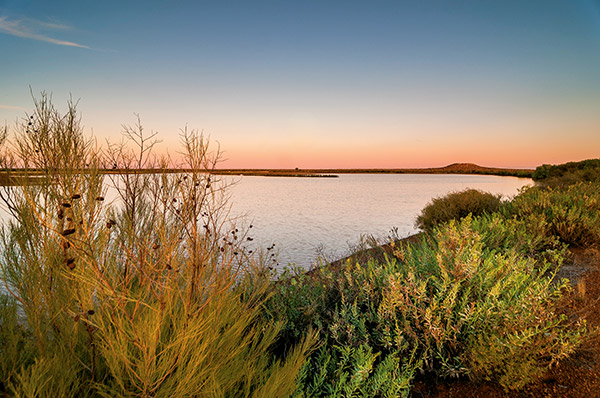 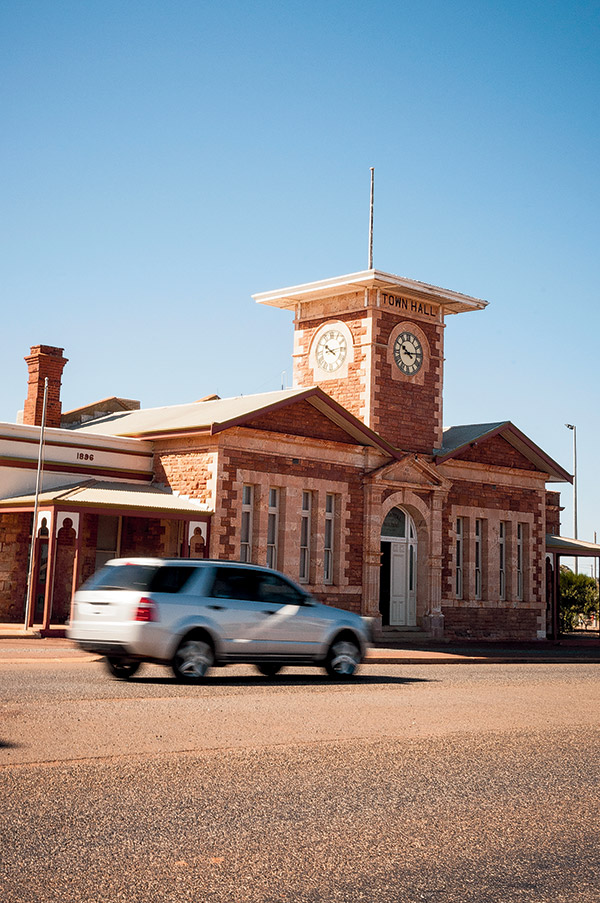 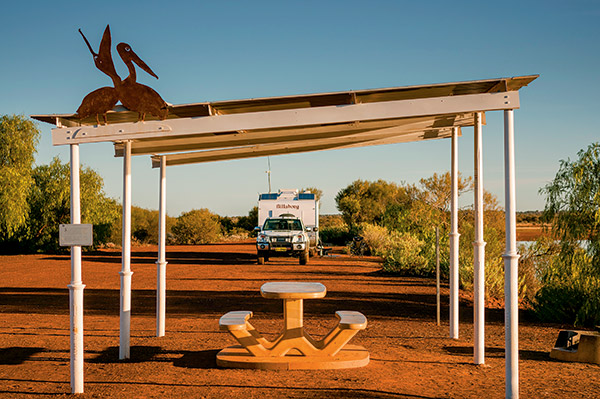 You could spend at least a couple of hours exploring the famous ‘Inside Australia’ installation at Lake Ballard, crisscrossing the lake from one figure to the next, following in the footsteps of emus and dingoes. High above, windswept islands of rocky ironstone provide stellar views as the sun colours the landscape, moving slowly over the distant horizon. It takes only minutes to climb the closest and most accessible knoll to count the figures within view.

Gormley’s mysterious figures were actually based on real-life Menzies locals who were laser scanned for the project. The figures were then cast from a stainless steel alloy that resembles volcanic rock and contains iron, chromium, nickel and trace elements of titanium oxide and vanadium taken from Lake Ballard itself.

Stretched along the lake’s gypsum dune and shaded by mulga woodland, a free bush camp provides travellers with an excellent range of facilities for such a remote spot. Along with wheelchair-accessible toilets and a drinking water tank, there are picnic tables and firepits dotted throughout the campground, and a dump point in the nearby day-use area.

Because there are currently no restrictions on how long you can enjoy this spot, unhurried travellers linger here over the mild winter months, enjoying the views and setting out each morning to reach another of Gormley’s 51 intriguing figures.

Its bustling gold rush heyday is history, its architecture in ruins, but just a handful of residents keep Kookynie from crumbling into another Goldfields ghost town. When Kookynie’s patch of gold was discovered in 1895, a host of shops and services never before seen in the Goldfields opened their doors to the town’s 3500 residents. Along with pubs, banks and blacksmiths, Kookynie proudly boasted the region’s first public swimming bath, its own brewery and soft drink manufacturers, seven brass bands and a turf club.

Prospector W A Miller took up one of the first settlement leases and families soon followed the fortune-seekers, building timber framed houses with walls of canvas and hessian beneath galvanised iron roofs. For a while, Kookynie boomed and the Cosmopolitan Pty Ltd pocketed an average of 15g of gold per tonne of ore.

There’s a cemetery on the town’s outskirts and a handful of original, hundred-year-old structures, including a string of shops on Cumberland Street that have been renovated and transformed into a home, the tumbledown Cosmopolitan Hotel and the heartbeat of the town – the Grand Hotel.

Another boom-and-bust gold mining settlement located close to Kookynie offers travellers a picturesque overnight retreat on the shores of Niagara Dam. Built by C Y O’Connor, the man behind Western Australia’s legendary Perth-to-Kalgoorlie pipeline, the dam was constructed to provide much-needed water for the flourishing gold town of Niagara and the steam trains that would soon chug north between Menzies and Leonora via Kookynie.

Two walking tracks with interpretive panels loop around the dam – the Breakaway Trail (1.6km) and the easy Round-the-Dam Trail (1.1km). If you plan to camp here, take plenty of drinking water and firewood. You’ll find Niagara Dam 60km north-east of Menzies via the Goldfields Highway and Kookynie Rd.

The intrigue of this historically-rich region continues just an hour’s drive north at Leonora, another gold mining hub, named by Sir John Forrest who later became the state’s first premier. Forrest was heading an 1869 expedition to find the remains of Ludwig Leichhardt who had disappeared two decades earlier, when he discovered and named Leonora’s distinctive conical hill, a sacred Aboriginal dreaming site of great significance.

Leonora’s share of the Goldfield’s vast mineral bounty was mined at Gwalia, an operation to the south, famously managed by Herbert Hoover who would go on to become president of the US. Travellers who discover Leonora’s surprising history and well-preserved architecture are usually pushing north to Wiluna or about to adventure offroad, taking the Great Central Road to Uluru across the border.

For them, Leonora provides the last affordable supplies (especially fuel) and the chance to enjoy a night at Malcolm Dam on the town’s outskirts. Once a soak that was expanded and dammed in 1902 to supply water to steam trains travelling the nearby railway, Malcolm Dam is an oasis on an otherwise desert landscape dotted with saltpans.

According to traditional custodians, the dam is home to the Wanapi, the rainbow snake, and great, vibrant flocks of black swans, grey herons and pelicans commune here. Being deeper than surrounding waterholes, Malcolm Dam stays full much longer into the dry season, which is good news for swimmers, paddlers and anglers chasing catches of bream, carp and spangled perch. I’ve heard that it’s a good spot to sink a yabby pot, too.

Menzies is located 190km north of Kalgoorlie via the Goldfields Highway. You’ll find Lake Ballard signposted 51km north-west of town, accessed via unsealed roads that are suitable for conventional vehicles and rigs driven with care.

To reach Niagara Dam and Kookynie, take the signposted turn off the Goldfields Highway about 43km north of Menzies and continue for 17km on Kookynie and Niagara Dam Roads.

Malcolm Dam is located 13km east of Leonora, signposted off the Laverton-Leonora Road.