You see some strange things beside the road in country Australia. Many trips have been planned around ticking off the ‘big’ monuments: the Big Pineapple on Queensland’s Sunshine Coast; the Big Banana in Coffs Harbour, NSW; or the Big Merino Sheep in Gouldburn, NSW. And while it may not match up in size to some of these classics, Western Australia’s Tin Horse Highway streaks ahead in number and variety and is about as weird, wacky and wonderful as the roadside gets.

Farmers in Kulin, deep in Western Australia’s southern Wheatbelt, have spent the past 15 years trying to outdo each other by making tin horses out of scraps found lying around their farms. It started as a community marketing campaign to promote the local bush races and has turned into a hotly-contested annual competition. Horses are made in secrecy, behind closed shed doors, and are revealed in all their glory come race day.

This friendly community competition has now become an attraction in its own right. The Tin Horse Highway is a popular alternative route for visitors on their way to or from the iconic Wave Rock in nearby Hyden. 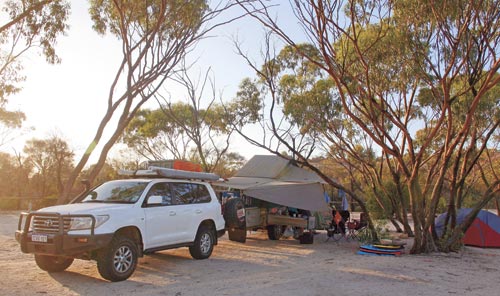 We headed off early from Wave Rock, heading to Perth, in an attempt to beat the flies. We soon hit the Kulin to Holt Rock Road, which heads west towards Jilakin Rock near Kulin, where there is some free camping. At the
turn-off to Jilakin Rock, we encountered the first of the tin horses. Vowing to return to examine them, we drove on to Jilakin Rock and the adjacent salt lake.

Jilakin Rock is a granite monolith beside the 1214ha Jilakin Lake. The lake is mostly dry, and is so salty it can’t be used for water supplies or recreation, but it looks pretty. A climb to the top of Jilakin Rock is easy and a great way to enjoy the spectacular views over the lake and surrounding countryside. It is apparently quite lovely here during late winter and spring, with an abundance of wildflowers and plenty of wildlife. Camping and picnic spots can be found near the base of the rock and in the bush nearby, as well as between the rock and the lake. There are a few picnic tables, but no toilets or water.

The Kulin Bush Races, which spawned the tin horse phenomenon, are held in October each year and the racetrack is located between the lake and Jilakin Rock.

On the Saturday morning, there is a gymkhana followed by the horse races in the afternoon. This is accompanied by novelty events, children’s entertainment, live music, fireworks, great food and friendly country hospitality.

Sunday morning brings the Great Aussie Revival Breakfast before you head home. Although it doesn’t rival the infamous Birdsville Races, it reportedly makes for a wonderful weekend’s entertainment.

But arguably the most important part of the weekend is the judging of the tin horses. All the entries are on display and the winner is decided by public vote and announced after the Kulin Cup on race day. Selected entrants are then displayed on the Tin Horse Highway for all to admire.

The Tin Horse Highway is a 15km stretch of road that heads east from Kulin out to the Kulin Bush Races Track at Jilakin Rock (the Kulin-Lake Grace Road).

You’ll find about 50 tin horses here, as well as 10 or so in Kulin itself and even more west of Kulin on the Corrigin-Kulin Road. These sculptures capture the humorous side of farming and the Wheatbelt lifestyle, as well as demonstrating that a wicked sense of humour is alive and well around Kulin.

Mark Fillypoosis, Rocky the Italian Stallion and the Australian Defence Horses are popular statues, and one can only assume there is a local or two putting in an appearance incognito. But I’m not sure anyone will own up to being the inspiration behind the horse sitting on the loo reading his Playhorse magazine.

The Kulin Shire says it best: “The Tin Horse Highway is a laughing matter!”

We meandered along admiring the many unique sculptures, photographing madly, before stopping in Kulin, which advertises itself as an RV-friendly town and it certainly is. Visitors are welcomed and the place looks great.

There is a free overnight camping area adjacent to a new public shower and toilet block, children’s playground and an aquatic centre that looks like it could rival Wet ’n’ Wild.

Kulin is certainly an incentive to extend your stay and discover more of what this region has to offer. Unfortunately for us, work was calling rather loudly by this stage, so we continued our run home to Perth.

Wave Rock at Hyden is a 15m-high granite cliff, which has been eroded at the base by weathering and water to create, as the name suggests, a wave-like shape. As the minerals in the rock dissolve and run down the rockface, they leave a lovely streaky colouring. The actual wave is about 100m long, and the bureaucrats have yet to fence it all off, so you can get right up close and personal to check it all out.

It is literally a 20m stroll to the rock from the nearby caravan park. The path is clearly marked and there are information boards explaining how the wave was formed. You’ll usually find at least a couple of manic tourists trying to scale the vertical wave face and hold stylised surfing poses as their companions loudly babble instructions and frantically snap away (I must admit, the kids replicated this behaviour later while Dad became the babbling photographer).

Once you’ve walked the length of the rock, you can continue on to further information boards and a staircase that leads up to the top of the wave, via a dam.

The rock is actually a catchment area for water and a little wall has been built along the top of the wave to funnel water into the dam.

There is a marked walk (the Hyden Rock Walk) up top with interesting information boards and extensive views out across the flats. Keep an eye out for the very cute lizards sunning themselves on the rocks.

Be warned that the short path down the rockface back to the base of the rock is doable but it is not clearly marked. It is very steep and not for the faint hearted so, unless you have mountain-goat balance, strolling back to the staircase might be a safer exit option.

In the opposite direction is the slightly less famous Hippo’s Yawn. It’s an easy 1.8km loop. It doesn’t take too much imagination to pick out the burping, I mean yawning, hippo.

Royalties for Regions funding, plus contributions from the shires of Kulin and nearby Kondinin, are being put towards a new Kulin Visitor Discovery Zone, incorporating an interpretive centre, about the Tin Horse Highway. This is currently under development and will enhance the Tin Horse Highway experience by revealing the stories behind the horses.