HOW TO VAN THE BUNGLE BUNGLES

HEMA'S KIMBERLEY ATLAS and Guide couldn’t be clearer: “Offroad camper trailers are permitted on the Spring Creek Track that leads to the spectacular Purnululu National Park, but caravans and conventional vehicles are not. In fact, anyone the rangers catch attempting to tow a caravan into the park will be turned back, and this includes offroad types. You have been warned!”

Faced with such unambiguous advice, my wife Wendy and I pondered how to conclude our adventure in the Kimberley with our 17ft (5.2m) Jayco Expanda Outback in tow. And given the all-bitumen Great Northern Highway from Broome to Kununurra runs right past the entrance to the Bungle Bungles, no doubt hundreds of other caravanners face the same conundrum each year.

For many on a long-term road trip, a detour to El Questro at the eastern end of the Gibb River Road is as far as they want to take their rig into the Kimberley. Why risk suspension and stone damage by travelling further off the blacktop?

But the Bungle Bungle Range, with its magnificent beehive domes, is just so tempting. Here are the options…

The 52km Spring Creek Track that leads from the Great Northern Highway to the ranger station and visitor centre at the threshold of the Purnululu NP can be a horror at times, with rough sections and a number of steep creek crossings.

It’s not that the track is particularly narrow or overgrown, but the many blind crests and sharp dips in and out of creeks make towing a conventional caravan both dangerous and, for even moderately sized single-axle vehicles, virtually impossible.

Even the smallest regular pop-top will struggle on this track. We tried to imagine how stupid we’d feel if we got stuck somewhere and had to be hauled out, facing a stern-faced ranger and other irate travellers. Despite this, you can take a caravan into the two major campgrounds in the national park, but it needs to be the right sort.

True to its name, the pop-up Kimberley Karavan is welcome just about anywhere a tent-based trailer will go, and we also came upon a new Track Trailer Topaz pop-top in our Bungles camp, towed by a Range Rover Sport.

They got in without drama, but even with the air suspension at full stretch (giving 227mm of ground clearance – about the same as a LandCruiser 200 Series), the drawbar scraped a few times getting out of creeks. However, with a Discovery 3, which rises to 240mm, the owner of the Topaz believed they would have gotten through unscathed.

Amazingly, we saw some fairly large motorhomes in the park – and have no idea how they made it. We would not have attempted it, and suspect that had they encountered a ranger, these brave travellers would have been given their marching orders.

However, a compact motorhome, or slide-on unit based on, say, a Toyota Troop Carrier, would be ideal.

Our Nissan Pathfinder, with its 211mm of ground clearance (somewhat less with our Expanda hitched up, causing the Pathie’s coil spring rear-end to droop) touched a few rocks mid-stream. The combined rig would not have made it.

And bear in mind that when we went in, regulars said the road was in the best condition that they had seen it in for some time. It took us slightly more than 100 minutes each way, but we have been assured it could be a three-hour one-way grind at the beginning and end of the dry season.

This is what we (and a number of others) decided to do, and planned far it in advance. It gave us the advantage of manoeuvrability by unhitching and travelling solo in our tow vehicle, and the comfort of knowing our caravan was safe and sound elsewhere.

Until recently, the closest place to leave your caravan was at Warmun (formerly Turkey Creek), 52km up the Great Northern Highway towards Kununurra. However, heavy rains earlier in 2011 all but wiped out the small township, with most of its population relocating north of Kununurra while their homes were rebuilt.

In the interim, the owners of the Mabel Downs Station, through which the Spring Creek Track passes, have set-up their own caravan park and storage facility – the Bungle Bungle Caravan Park and Station Stay, just off the highway. It had only been open a month or so when we arrived, but it was already busy, with many shiny white vans parked in the rather bare, freshly-cleared area while their owners got their tow cars dirty.

At $45 per night for powered sites ($35 unpowered) for two people ($10 extra per person) and $20 a night just to park your van, it’s not cheap. But they have a large marquee that serves hot buffet-style meals every night for $20 per person.

However, it’s convenient and much safer than leaving your expensive van and its contents in one of the free camps just off the road opposite the Bungles turn-off. These camps would only be a recommended option if you planned to travel in and out of the park the same day, which would have been possible with the road conditions at the time we were there.

But this would mean driving into the rising and setting sun (and opposing traffic) each way, and the six or seven hours you would have in the park would only allow you to do two or three of the walks. We spent three days, and would have liked more.

Since we were travelling east from Fitzroy Crossing on the Great Northern Highway, and planning to return to Alice Springs via the Tanami Road, we unhitched and left our Expanda in the Halls Creek Caravan Park (for just $3.30 a night), packed our camping gear and drove the one-hour north to the Spring Creek Track turn-off from there.

Our OzTent RV4, double air mattress, sleeping bags, two-burner stove, folding chairs and table fitted comfortably beside the Engel fridge/freezer in the back of our Pathfinder. (See page 214 for a review of the OzTent.)

It was really liberating to be able to enjoy the Pathfinder on the drive into the Bungles. Its 2.5L turbodiesel engine, sharp rack and pinion steering, compact size and supple independent coil spring suspension made it feel more like a rally car than a tow vehicle on the swooping road with its many creek crossings. 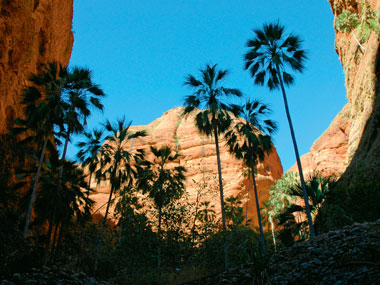 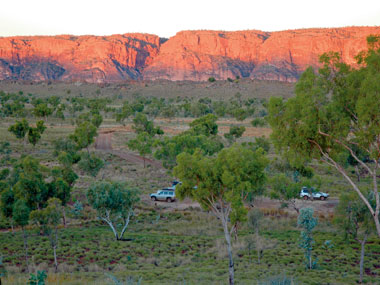 There are two main camping areas in the park: Kurrajong, 5km north of the Three Ways Junction, with great sunset views of the north-western side of the Bungle Bungles, and Walardi Camp, 11.5km south of Three Ways.

Kurrajong has three separate camping areas: a quiet one, one for generators, and a third for tours. Both this spot and Walardi are excellent bush camps with grassy sites, clean drop toilets, tap water (which should be boiled before drinking) and communal fireplaces with free wood supplied by the ranger each evening.

We camped at Kurrajong, but visited Walardi and, frankly, they are equally good. Which one you chose depends on your schedule.

To do the Bungles justice, you really need to visit at least each of the two key sights in both the north and the south, and also take a helicopter ride.

The ‘must-do’ walks in the north are to Echidna Chasm, a narrow and spectacular gorge carved deep into the chasm, and Mini Palms Gorge, which takes you up a rocky river bed through clusters of beautiful Livistona palms. In the south, the Domes walk and Cathedral Gorge are equally, if not more, spectacular.

We did the northern walks one day, driving up to the Kungkalanayi Lookout near the Kurrajong camp for the sunset and our sundowners.

The next day we did the two southern walks and finished off our visit with a spectacular 30-minute helicopter flight – well worth it to put the Bungle Bungle Range in perspective as only a relatively small part of Purnululu NP.

So it really didn’t matter which camp we were based at – the driving distance to get to the sights would have been the same. But if you had only one day to spend, or were planning a flying day trip in from the Bungle Bungle Caravan Park then, reluctantly, we’d say the southern walks are marginally better. I’m sure others will disagree.

A scenic helicopter ride is the ideal way to see and appreciate the Bungles.

Those that operate within the park from the Bellburn Airstrip near the Walardi Camp start at $215 per person. We took the 30-minute option for $325 per person. Both the view and the pilot’s commentary were excellent. If you get a chopper with the doors off, remember to try to sit in the front for less wind buffeting.

STAY AT THE RESORT

An alternative to camping is to unhitch your caravan, drive in with your tow vehicle and stay at Australian Pacific Touring’s Bellburn Wilderness Lodge, located near the airstrip. You don’t have to be on one of their tours to stay, but you do need to book.

The latest rates for dinner, bed and breakfast in tented accommodation with private facilities start from $240 per person, per night.

In addition to helicopter flights, the Bungle Bungle Caravan Park offers daily road trips into the Bungles commencing from the camp at 6.30am.

For $315 per person, these trips manage to fit in both Echidna Chasm and Cathedral Gorge, lunch and a bush dinner, and one night free in an unpowered site back at the caravan park.

Purnululu NP (incorporating the Bungle Bungle Range) was established as a national park in 1987. It covers an area of 239,723 hectares, bounded in the east and south by the Ord River, and on the west by pastoral leases.

The Bungle Bungle Range is situated within the park, covering 450 square kilometres.

The Bungle Bungles are accessed via the rough 53km Spring Creek Track, located 217km south-east of Kununurra off the bitumen Great Northern Highway. You need to allow up to three-hours for the final 53km from the highway to the ranger station and visitor centre, depending on the time of year and road conditions.