THE ADVICE WAS to the point. Don’t. The infamous Gibb River Road, which cuts a 650km swathe through the heart of WA’s spectacular Kimberley region, has a well-documented history as a vehicle breaker. Washaways, flooded creeks and rivers, hundreds of kilometres of brutal corrugations and fine red dust that penetrates even the best-sealed rig have seen to that. And we’re referring to ‘proper’ full-spec 4WDs, let alone ‘offroad’ caravans.
Friends of ours who have lived for the past 43 years in Kununurra, the Gibb’s eastern gateway, expressed concern, echoing the advice freely given in HEMA’s excellent Kimberley Atlas & Guide: “some makes shouldn’t be taken off the bitumen”.
Thus talk of taking a Jayco across this recognised horror stretch – even an Outback spec Expanda – ramped up the level of doubt and derision from those who should know. This was a ‘soft-roader’ they said, designed for good unmade – not corrugated – roads. It would shake itself apart.
But they were wrong. We did the Gibb, book-ended by the combined 1600km of the Oodnadatta Track and Tanami Road, with minimal damage and breakages. But we’ll also be the first to admit that timing, and our itinerary, played heavily on our side.
One person’s highway can be the next person’s horror stretch. It’s all in the lap of the weather gods and graders. And while we breezed through the Oodnadatta Track in May, July saw some friends slipping and sliding through mud in their LandCruiser 100 Series without a van in tow.
Our choice to do the Gibb at the start of the dry season was carefully calculated, but it almost backfired. Our Kununurra friends, John and Pauline Kirby, gave us advice but no guarantees. They have lived in outback Australia long enough to know that the unexpected is always on the cards.
We originally planned to leave in mid-April, but at that stage the Gibb River Road was completely closed to all traffic for the 200km ‘heartland’ stretch between the Pentecost River in the east, and the Kalumburu turn-off to Mitchell Plateau and Falls. So we delayed… and waited. Then, in mid-May, the rain stopped and the water levels began to fall.
Even after we reached Alice Springs following our shakedown run up the Oodnadatta Track in the last week of May, the Gibb was closed. So rather than take the Tanami Road to Halls Creek and then travel clockwise via the sealed Great Northern Highway to Windjana Gorge and Imintji as we had initially planned, we headed up the Stuart Highway bound for Kununurra, where we calculated we could happily spend a few days.
But we didn’t linger in Kununurra as long as we would have liked because almost as soon as we arrived, word began to spread that the Gibb was open to 4WDs and offroad vans.

THE ADVENTURE BEGINS
The major road junction 45km west of the town is where the Kimberley adventure really starts for the majority of travellers. Most of the shiny vans turn left and take the sealed Great Northern Highway south, where they will pass by the Argyle Diamond Mine, Purnululu National Park and the towns of Halls Creek and Fitzroy Crossing before eventually striking the WA coast at Derby or Broome.
Some of these shiny RVs turn right and head for Wyndham, 64km up the bitumen, but the most adventurous and travel-stained RVers peel off left after just 8km onto the unsealed Gibb River Road for the ultimate road trip.
There’s something undeniably exciting about facing a pair of road-status boards where six of the nine roads listed have bright red “closed” warnings against them. Fortunately, the four on the Gibb River Road only referred to vehicles heavier than 15t, so our rig’s combined weight of less than 4.5t gave us the green light to continue.
No matter how conservative the advice on these signs may appear in hindsight, ignore it at your peril. Apart from hefty fines, your insurance company will most likely disown you and void your warranty if you come to grief.
With the magnificent Cockburn Range looming in the distance, we headed down the Gibb, pleasantly surprised by the better-than-expected and only lightly corrugated surface, interspersed with welcome patches of bitumen on some inclines.
But 33km on was a further defining point at the turn-off to the 400,000ha El Questro station, which was the destination of the majority of travellers. We’ll cover the El Questro experience in detail in a later issue of Caravan World, but in a way, El Questro is a Kimberley sampler that many choose as an alternative to the full GRR experience.
Past the El Questro turn-off, the Gibb traffic thinned noticeably, some travellers no doubt daunted by the reportedly high water levels in the nearby Pentecost and Durack rivers. Both appeared prominently in the warnings on the WA government’s website in the weeks leading up to our arrival, and reported depths of 750mm or more made us justifiably concerned. We were confident that the Pathfinder and its snorkel could cope, but just how much water would penetrate the Expanda and reach key electrical components?
Our fears proved groundless, as by the time we crossed the Pentecost the torrent had dropped to a manageable 400mm, while a timely road crew rock drop in the Durack reduced its 750mm peak by half. However, in the time-honoured tradition of outback travellers, we sat it out on the bank to watch others test the water before committing our rig to the crossing.

HOME VALLEY TO ELLENBRAE
One good reason to cross the Pentecost is to visit Home Valley Station, just 9km further west. Owned by the Indigenous Land Corporation since 2006, the station’s lush and grassy camping/caravan park, complete with splendid setting-sun views of the magnificent Cockburn Ranges, looks almost too good to be true and offers a unique, resort-style experience. Unfortunately, we didn’t stay there – it was too early in the day to call it quits after leaving El Questro – but we envied those who did.
Aside from the obvious attractions of its pool and trendy Dusty Bar & Grill, Home Valley offers a wide range of Kimberley experiences, ranging from fishing and bush tucker tours to trail riding, a mini cattle muster, an indigenous cultural experience and a general station tour.
It’s all well organised and the range of accommodation choices make it a worthy, and perhaps even upmarket, rival to El Questro. But we had our own five-star accommodation and moved on.
Just a few kilometres down the road we regretted the decision, with the Pathfinder suffering its first – and only – flat tyre of the trip. A sharp stone pierced the central tread area of one of the 4WD’s rear original-equipment 17in Goodyear Wranglers. Now we understood why Jayco, like most caravan makers, don’t fit anything larger than 16in wheels and deep-treated tyres to its RVs: more ‘meat’ on the tyres means less chance of a puncture.
After changing the tyre we pressed on to Ellenbrae Station, a much more rustic property owned by Melbourne’s Grollo family. The lure for us was a very simple one – the promise of freshly baked scones passed on by fellow travellers.
With no more vehicle issues, we arrived at sunset, greeted on our arrival by a lonely-looking dingo. After a chilly night, the homestead’s promised scones were fresh and warming, with co-manager and host Karen Upton apologising for the lack of jam. Her husband Jason had it on his shopping list when he had left for the day trip to Kununurra – at 4am that morning. Honey and freshly whipped cream made a very good substitute. 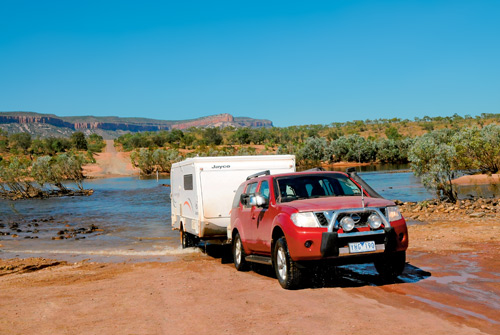 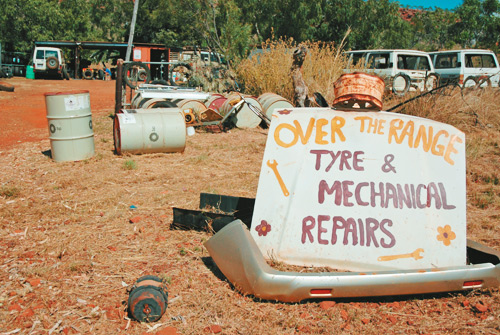 ONWARDS TO MANNING
From Ellenbrae we had planned on making the fairly easy 70km run on the Gibb River Road to the Kalumburu turn-off and then on to the Mitchell Plateau and its beautiful falls. When we arrived at the junction, however, a call on our sat-phone confirmed the road was only open as far as Drysdale River and unlikely to be accessible any further for about a month, if at all this season.
We had really wanted to see the falls that friends had told us so much about, but sightseeing flights from Drysdale were booked out five days ahead. It seemed we were not the only travellers with this on their mind. Given this would have stretched the schedule too far, we reluctantly pushed on to an excellent substitute, Manning Gorge.
The Gibb River Road from the Kalumburu turn-off was every bit as bad as we had heard it would be: rough, unpredictable and corrugated. After an hour of thunder-down-under, we stopped for a damage check. Amazingly, the outcome was nothing more than our continually self-unscrewing mixer tap and yet another open jar of Nescafé, a real testament to the Expanda’s strength and basic, but effective, Al-Ko offroad suspension.
We paid our camping fee at the Mt Barnett Roadhouse, which has recently changed hands – a very reasonable $8 per person per night in contrast to the $35 and $40 per night being asked elsewhere – and made our way 7km down another dusty road to the campground.
Like most camping areas in the Kimberley, Manning Gorge is free form – stop where there’s room. But possibly because of the Kalumburu Road closure it was crowded during our visit. The upside was the camp’s great setting, next to a large waterhole on the Manning River through which you need to wade and swim in order to enjoy the beautiful walk to the falls at the end of Upper Manning Gorge. It’s well worth the effort though, and the swimming at both ends of the trek is safe and sublime, with your choice of rock shelves or a sandy beach at the falls for your lunch spot.
It was a highlight, which was just as well since the lingering effects of the 2011 big wet held another disappointment for us: the highly-rated Bell Gorge and its preceding Silent Grove campground, around 100km further down the road, would be closed for at least another fortnight.
Instead, we visited the pretty Galvans and Adcock gorges just off the road, some 14km and 32km distant, respectively. They are great spots for a coffee break or lunch. However, we were heading for the Imintji Store and its neighbouring Over the Range Tyre & Mechanical Repairs run by the affable Neville Hernon (with help from his dog, River) to patch the damaged tyre. We had been travelling for three days without a spare after promised repair facilities failed to materialise and we couldn’t push our luck any longer.
Repaired and revived, our GRR crossing was nearly over. We could have prolonged it by back-tracking 25km to take the 95km diversion south to Mornington Station and the magnificent nearby Dimond Gorge, which our Kununurra friends assured us was a Kimberley highlight. But a look at the road convinced us that it was beyond the Expanda’s capabilities, and we instead settled for a quality alternative, Windjana Gorge.
See Caravan World for more on Michael's Kimberley adventure.
Source: Caravan World Sep 2011.