ON OUR RECENT motorhome trip to WA, we found Albany an RV-friendly town, and this persuaded us to stay much longer than we otherwise would have.

The City of Albany goes to great lengths to ensure visitors keep coming. On Proudlove Parade, across the gardens from the visitor centre, a tap provides drinking water to campers, and just along Princess Royal Drive near the brig Amity replica, there is a toilet dumpsite. These amenities are very helpful for those campers who use the several free campsites located outside town. Most of these campsites have toilets maintained by the council, with some also having water. Those we visited were situated on wonderful beaches where the fishing, swimming and surfing were good, with whales and dolphins dropping in most times we where there. 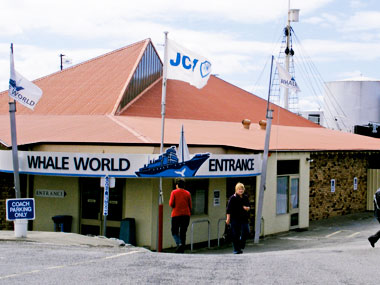 Albany casually drapes across the shoulders of two imposing granite mountains, Clarence and Melville. The city flows down the intervening valley and meets the sea in the beautiful Princess Royal Harbour, a deep-sea port that was once the principal port in WA. Both mountains have lookouts that afford wonderful views of the harbour, beaches and hinterland.

Albany was settled in 1826, two years before the Swan River settlement of Perth, which makes it the first European settlement in WA. Princess Royal Harbour opens onto King George Sound, which offers protection from the westerly Roaring Forties, but there’s nothing between the outer sound and Antarctica.

Albany lends itself to all kinds of boating and is blessed with a large, almost land-locked estuary called Oyster Harbour into which two rivers flow. The harbour is well sheltered, and is home to Albany’s fishing fleet and marina. There is an excellent boat-launching ramp with a large parking area for boat trailers and vehicles.

Middleton Beach is the city’s main beach. It’s a pretty beach that has a good surf break but also offers safe swimming in a sheltered corner in front of the Surf Life Saving Club. During the whale season, from May to early October, whales are commonly seen just off Middleton Beach and the picturesque Wooding Point.
COASTAL PATHS

A 35km network of walking/cycling paths still under construction will eventually connect the three harbours of Albany. We decided to ride our electric bicycles the 5km each way from Middleton Beach to Oyster Harbour and back. We found this path to be great fun because it rises and falls like the ocean waves as it follows the contours of the underlying sand dunes. It begins and ends along open stretches of sand dunes and then dives into the dense coastal scrub of ti-tree and paperbark.

During spring, wildflowers line the path under the trees and their sweet scent mingles with the invigorating tang of the ocean. There is a wonderful scenic path (which we also rode) that follows the face of Wooding Point and then further across the face of Mount Adelaide and Clarence, which takes you into the city proper.
LOCAL TRANSPORT

Many people think the major drawback of motorhomes is that you have to pack everything up even just to go down the street and get a carton of milk. We solved this by carrying two electric bicycles on the rear of our motorhome. They are a delight to ride, require no registration or licence and cost almost nothing to run. They cruise at about 20km/h or 25km/h at full throttle and will do at least 25km on one charge. We wouldn’t be without them.

For those who prefer the luxuries of hot running water and green lawns compared to what’s offered at the free camping sites, Albany has many excellent caravan parks (we spotted eight, and the tourist office lists 10 in the area). We spent a couple of days at Middleton Beach Caravan Park and several days at the Cosy Corner East free camping site, which are both on the beach.
OTHER ATTRACTIONS

Whale World is a major tourism drawcard. Whaling only ceased in Albany in 1978, and the old whaling station along with one of the original whale chasers is one of the best-presented destinations we have seen. You can watch fascinating videos on whales and sharks in three separate theatres and scramble through the hatches and ladders below and above decks on the whale chaser Cheynes IV. There is also a very smart restaurant in the visitor complex.

Visitors can take an escorted tour through the whaling station and the commentary is both interesting and entertaining. After the tour you are free to wander through the complex and explore those parts you would like to have spent more time in during the tour. We were fascinated by the huge whale skeletons and had trouble imagining how men in small open boats, such as the ‘beetle boat’, could hunt and kill these huge and powerful creatures.

But Albany has more to offer. We visited the wonderful lookout and ANZAC Memorial on Mount Clarence and the replica of the brig Amity, as well as the interesting museum nearby. We shopped in the main shopping precinct of York Street and visited the delightful farmers’ market held each Saturday morning on Collie Street, but we hardly scratched the surface of things to do in this remarkable little city.

There are wineries, breweries and even a sandalwood factory, and a visit to the Stirling Ranges is a nice day trip. And everywhere you go during spring, there are masses of wildflowers. They’re not the great carpets of wildflowers found north of Perth but they present themselves in a wider variety, from orchids to banksias, from daisies to flowering eucalypts. Their presence colours and perfumes the bushland.

As a tourism destination, we can recommend Albany and the surrounding district. If you are short of time, you can still have a wonderful experience, just reserve some time in the future to further explore this fascinating southern city.
Source: Caravan World Jul 2009.