The town of New Norcia is just a two-hour drive north of Perth, but a trip there feels like a journey back to Spain in a bygone era. That’s because New Norcia, Australia’s only monastic town, was built by Benedictine monks from Spain in the 19th century.

A guided tour takes visitors into the monastery to see several chapels, including the ornately decorated Old Spanish Chapel. The frescoed walls of the Abbey Church depict familiar religious scenes with Australian motifs. The Nativity scene includes a kangaroo, grass trees and an Aborigine, and the star that the Wise Men followed seems to have been one of the Pointers from the Southern Cross.

When the monks established New Norcia, they planted wheat, vegetables, fruit trees, olive trees and grape vines. In the 1850s they built a small flour mill that is still standing today, and then a larger one in 1879. In 1886 they installed a wood-fired oven to bake their daily bread. That oven is still in use today, and you can buy bread that has been baked in it. 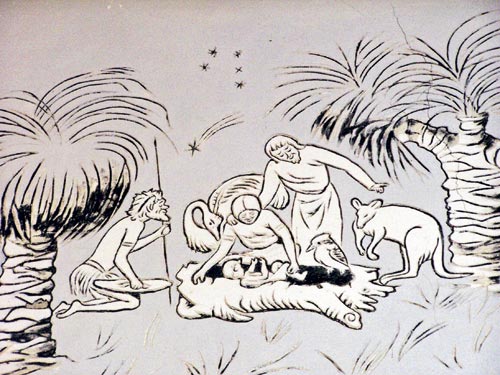 Extracted from Abroad at home, by Susan and Keith Hall,  scheduled to feature in Caravan World issue #463, March 2009, out February 18.