I think it’s fair to say everybody has at least one special travel destination that holds a certain mystique, one that makes them think, “I’ve got to get there one day.” For some it may be an exotic overseas holiday to a tropical island or a mountain hideaway. Not me. I find more than enough in my own country, particularly when we have little jewels like Victoria’s Nelson to explore.

Nelson has always been one of those special places for me. Sure, I’d driven through it loads of times, and even once stopped to have a brief walk around this small, picturesque coastal hamlet. But as pretty, friendly and inviting as it was, it was obvious the true secrets of this little town lay in the pristine waters of one of our most beautiful rivers, the Glenelg. 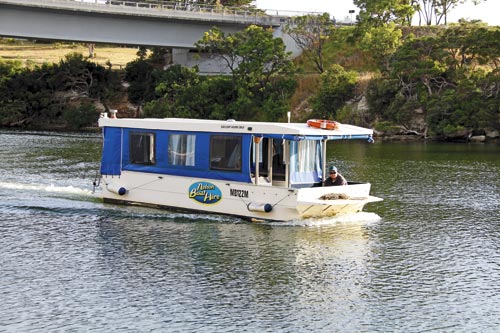 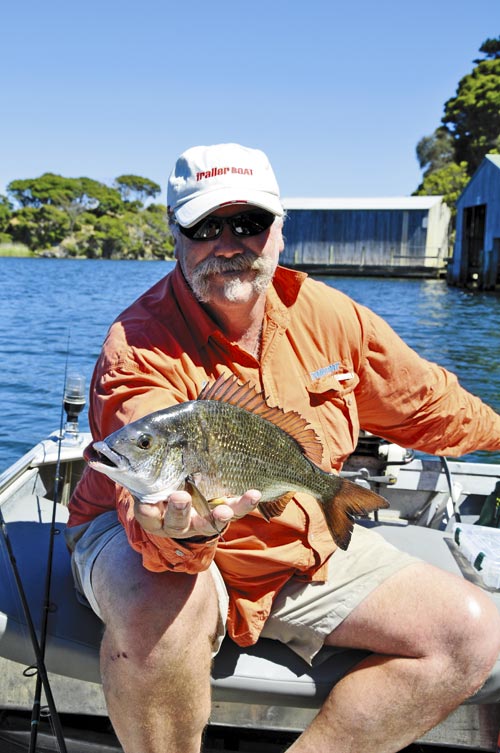 Without a doubt, the Glenelg is a big river. Its navigable waters weave in and out of the Vic-SA border in a wonderland of forested banks, secluded sandy bays, boathouses and limestone cliffs.

Parks Victoria has recognised the area’s significance with the Lower Glenelg National Park, which leads out into the coastal Discovery Bay National Park. I must say, Parks’ devotion to providing pleasant facilities, easy access, and functional boat ramps and docking facilities is a breath of fresh air.

The big, safe river provides opportunities for all sorts of activities. You can be as strenuous or as slack as you like with water skiing, canoeing, kayaking, paddle boats, tourist cruisers, hire boats, houseboats, swimming and bird watching. You can also get into some active sportsfishing, or just lazily drown some bait — all with a reasonable expectation of some success.

At more than 350km from headwaters to mouth, the Glenelg is the longest river in southwest Victoria. Its expansive drainage basin feeds from the Grampians National Park into the gigantic Rocklands Reservoir, then meanders southeastward through small rural towns like Balmoral and Casterton before becoming generally navigable below Dartmoor, some 50-odd kilometres by road from Nelson.

This is a big body of water (for Victoria, anyway) surrounded by forest. It’s a terrific getaway for camping with sites along both sides of the river and facilities including piers, landings, boat ramps and toilets. These campsites mostly have easy two-wheel-drive access and are all managed by Parks Victoria. You must book in prior to camping.

Western Victoria is also home to many underground caves worthy of exploration. The world-famous Piccaninnie Ponds is a short drive from Nelson, but is only accessible to experienced, well-equipped underwater cave divers. For the slightly less adventurous, there is the guided walk through the Princess Margaret Rose Cave, its beautiful stalagmites, stalactites and helictites forming a veritable underground fairyland.

You could easily spend a fortnight winding your way up the navigable waterways in a comfortable cruiser, or perhaps in a smaller boat with appropriate camping equipment. Personally, I reckon I could lose myself for many months in this watery playground and its surrounds.

If you really want to see the entire river at a slow and easy pace, while still having an adventure to remember, have a look into Paestan Canoe Hire. It not only supplies fully equipped canoes and kayaks, it can also help you plan the entire trip with accommodation alternatives, 4WD pick-up and drop-off and qualified instructors and guides, and it caters for individuals all the way up to large groups.

As you wind your way downstream you will pass the small SA town of Donovans. This is one hell of a pretty little village, complete with boat ramps, barbecue facilities, boat sheds and endless possibilities.

JEWEL OF THE NILE

Further toward the mouth you will eventually arrive at lovely Nelson. While the town’s primary feature is the bridge over the main road, the waterside boathouses give the river a real identity. These character-filled landings vary from very basic fishing platforms to heritage constructions sheltering old clinker boats to more modern shacks with basic waterside accommodation.

I recently spent a couple of nights in one of these old sheds, camping under the stars with a swag tied to the deck rail, catching bream for breakfast, lunch and dinner, and getting frustrated by numerous failed hook-ups from the local mulloway stealing my live mullet.

While in town go and talk to the crew at Nelson Boat Hire. These guys are very good fishos who will not only sell you the best in live and frozen bait, but also have kayaks, canoes, pontoon party boats, paddleboats, houseboats, dingies and half-cabin vessels for hire. Better still they will give you the latest guff on what’s biting, and where and how to catch ’em.

The Nelson Hotel first gained a licence to serve liquor in 1852 and has had numerous facelifts and extensions since these early years. What hasn’t changed, however, is the cold beer and friendly service. A must for visitors to the region, the hotel offers hearty counter meals, a beer garden and homely accommodation.

Right across the road from the hotel, the Nelson Kiosk sells all of life’s essentials, including some great local scotch fillets for the barbecue.

Nelson is home to two caravan parks. River-Vu Park is right in town and, as the clever name suggests, has views stretching from the park and main boat ramp looking south toward the river mouth. There are powered sites and cabin-style accommodation for weary travellers.

A little farther out of town you can find the Kywong Caravan Park and its 25 acres of quiet bushland, disturbed only by the sounds of the local wildlife.

There are plenty of other accommodation options available in the region but the forest is a great place to camp, particularly with a boat.

Nelson has excellent boat ramps and facilities, and a trip with Nelson River Cruisers on the Nelson Explorer is a must, even if you don’t own a boat.

As you leave town and travel downstream the river opens out to a large expanse of sand flats, complete with deeper channels and shallower, fast-running tidal streams. Navigation becomes impossible nearer the entrance where the waterway explodes into the vast expanse of the Southern Ocean. However, you can take small boats a fair way down to some very productive water where many boats can be found trolling small mullet livebaits for the marauding mulloway.

You can get to the lower reaches and beach via a reasonable vehicle access road from Nelson, and the long expanse of the Discovery Bay Coastal Park provides some great opportunities for sun seekers and fishos alike.

There are walks everywhere in the area, including the Livingston Island Nature Walk on the lower reaches. This is popular with birdwatchers, particularly for wading birds such as spoon bills and egrets, but also for the vast numbers of swans, pelicans and herons.

The area around Nelson and the Glenelg is also a part of the Great South West Nature Walk, which traverses 250km of coast and river land between Nelson to the west and Portland to the east, including the historic maritime adventures of Cape Bridgewater, Bridgewater Bay, Cape Nelson and the Mt Richmond National Park.

To be honest, I came to Nelson for the fishing, but I soon fell in love with the whole area. Western Victoria has so much to offer that it may just take the rest of my days to explore all of its great attractions. What a way to go.

You can find trout and a few native species in the Glenelg’s upper reaches, and some great Australian salmon and mulloway action on the beaches.

But for me the estuary species are what makes this place special. It’s a haven for three of our prime recreational fishing species — estuary perch, mulloway and bream — but also holds most of the other bread-and-butter types like mullet and garfish. Interestingly, Brett from Nelson Boat Hire tells me there are no flathead or King George whiting in the system.

Structure is the key to fishing success and there’s plenty of it along the pristine Glenelg River. Great results reflect the fishing options, and casting around the boat sheds or fallen tree branches will always prove more successful than out in the middle of the river.

While I’m no great lure fisho, my friend Trevor Buck from Melbourne tackle shop Gone Fishin’ managed a few lovely morsels with small bibbed lures resembling local mullet. The area is livebait heaven with crabs and mullet readily available to buy if, like me, you’re too lazy to collect it yourself.

I have long-held a theory, backed by hours of practice, that you can’t beat a bit of smelly prawn for a bream. I proved it again with a half-peeled prawn outfishing the live crab 20/1.

The river is navigable for many kilometres and would take many days to properly explore. At night you will see old clinkers and carvels, dingies, rowboats, modern sportsfish rigs with electric outboards and everything in between silently trolling live mullet, aiming to tempt the famous Glenelg River mulloway.

There are also loads of options for canoe, kayak and land-based fishos. All of the camping grounds have water access and most have piers or landings.

Nelson has two caravan parks. The River-Vu is right in town, while the 25-acre setting of Kywong Caravan Park is just 1km north. Both have powered sites and on-site accommodation, but only Kywong offers drive-through sites.

The Parks Victoria campsites in the Lower Glenelg National Park are terrific spots for the civilised camper. You could tow even the largest caravan into many of the defined camping grounds with relative ease. This is family-friendly camping with proper toilet facilities on most grounds, but no showers or drinking water. The majority of sites have a pier or landing at the water, and some even have boat ramps.

On a previous trip we spent a couple of great nights at the Wilson Hall camp grounds. There are two levels of sites as you rise farther up the riverbank, and a ramp, piers and landings for boaties.