From our vantage point, the long arc of beach swept away, lost in the morning sea mist, while the tall dunes of the Twin Rocks area morphed into the dull clouds strewn from horizon to distant horizon. We were standing on low cliffs overlooking Twin Rocks Beach at the Head of Bight in the Yalata Aboriginal Lands, the site of a local whale watching facility a few kilometres to our west.

We’d gained permission to enter this normally-restricted zone and to run the beach south from here to the Hilton campsite, the nearest point from where the public can access the beach. Hilton and a few other sites further south are popular fishing camps for anglers trying their luck along this wild, surf-smashed coast. Access is controlled by Yalata Land Management and a permit is required to camp and fish this coast.

Below us, Eyre Well and, further inland, Illcumba Well, were hidden by small dense stands of low green scrub. Illcumba is a waterhole and traditional meeting place for the local Indigenous population, while Eyre Well was where the explorer Edward John Eyre found a life-giving soak for his party during their 1840 ordeal of crossing the Bight from Streaky Bay to Albany. 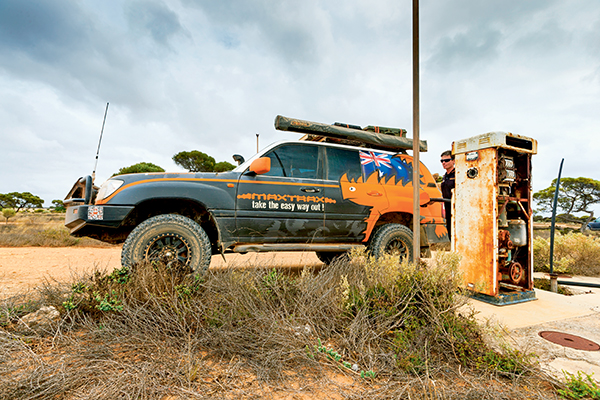 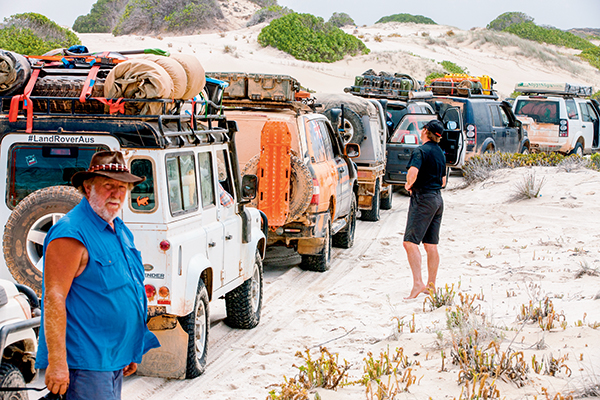 We dropped down the rocky, shaly cliff, poked our way between prickly scrub and drove onto the seaweed-strewn beach. While unquestionably beautiful, this route resulted in more than a few of us getting bogged. When we finally arrived at the Hilton after an afternoon of extracting cars from the sand, everyone was glad to drive off that beach, heaving an anticlimactic sigh.

We had left Eucla days earlier after changing over a few of the crew and topping up fuel and supplies. The first day out from that small hamlet of civilisation was a big one.

The bitumen is, at most, a kilometre from the spectacular Bunda Cliffs along this stretch but we wanted nothing to do with the blacktop. Our track first took us through Eucla National Park to cross the SA/WA border at the cliffs above the Merdayerrah Sandpatch, before swinging inland to pick up the old highway, striking arrow-straight across the Nullarbor, through Nullarbor NP.

We stopped at the old Koonalda Homestead, which has a nondescript camping area nearby, but for many of us the highlight was the hundreds of old vehicles taken by the Nullarbor when the highway was dirt. The homestead, built in 1938 mainly from railway sleepers from the Trans-Australian Railway Line, has been renovated by national parks.

We also headed out to Koonalda Cave, 5km north of the homestead, which was once the source of the property’s water supply. Entry to the cave is prohibited, but within its dark depths, ancient Indigenous scratchings estimated to be 20,000 years old make it a significant archaeological site.

That night we camped back from the Bunda Cliffs south of the Nullarbor Roadhouse, before meeting the soft sand at the Head of Bight. Our route from Hilton then took us behind the beaches along Coombra Track through the Yalata Aboriginal Lands till we got to the track heading south to Dog Fence Beach.

This track, with deep bulldust patches in places, runs beside the Dog Fence that journeys north and then east through SA and along the SA/NSW border, finally crossing into Queensland. Some say it’s the longest man-made object in the world and its job is to keep the dingoes out of the pastoral areas of south-eastern Australia.

Our camp that evening was a beauty, tucked up high on the edge of the Ocock Sandhills (just east of the Dog Fence), with dense scrub patches protecting us from the wind and views of sweeping beach bordered by multiple lines of surf.

This is part of the 40,000ha Wahgunyah Conservation Park, which stretches along the coast from the Yalata Lands to Fowlers Bay. Behind the sweep of beaches, coves and cliffs, the Ocock Sandhills run into the Wonginya Sandhills, which transforms imperceptibly into the Chalgonippi Sandhills, making for one impressive mass of bare white dunes.

We stuck close to the coast the next day as we headed to Wandilla Bay and then the protected Mexican Hat, before climbing Scott Point for great views of the coast to the east and west. Dropping off the headland we hit the sand at Scott Bay and cruised around the arc of beach till we found a track that cut inland over some very steep dunes. In this mini Sahara of wind-blown sand we couldn’t help but have a short play – all for the cameras of course – before slipping into the small village of Fowlers Bay.

A day’s travel further east across rocky headlands, around salt marshes and some of the best surf beaches found in southern Australia, saw us cruising along a relatively easy beach and cutting inland over some low dunes to a protected strip of sand on the southern side of Tourville Bay. In the southern half of the bay, tidal channels wind through mangrove forests, the most substantial of which is Davenport Creek, which just happens to have a strip of white sand along its southern edge. This is a popular spot for locals as the protected waters offer good fishing for whiting and flathead while the calm waters are good for paddling a canoe or even for water skiing.

From here, we were back in relative civilisation and, after a bush camp above the rocky shores of Point Brown, south of Ceduna, we cruised along back roads into the diminutive Baird Bay to meet with Alan and Trish from Baird Bay Ocean Eco Experience. This was our final swan song for the trip, with the couple offering one of the finest wildlife experiences you can have in Australia.

Alan and Trish’s custom-built charter boat docks offshore from Jones Island, home to about 100 wild Australian sea lions. The island is a conservation park and the small beach is a nursery for the cubs. Within a minute, a couple of young sea lions were around the boat and we slipped into the shallow water to join them.  If you don’t pay them any attention, they’ll more than likely nibble on your feet or pull your hair, shooting away as you turn towards them.

That evening, Macca cooked up a fresh spaghetti marinara taking advantage of the local supplies: a fine ending and a fitting celebration to our journey across ‘the Big Bight’ – surely one of the best, maybe the best, coastal 4WD trips in Australia!