For the greater part of our adventure so far – almost 8000km from Canberra to Streaky Bay, SA – we had been hugging the coastline for no reason other than we always wanted to see the edge of the continent along Bass Strait and the Southern Ocean. Then we began the next phase of our journey.

We set our compass to the north and headed inland. It didn’t take long to reach ‘inland’ from Streaky Bay, for a mere 100km got us to Minnipa, on the Eyre Highway and Granite Country beyond, with ‘civilisation’ disappearing rapidly in our rearview mirror.

This 166,000ha reserve comprises a number of former pastoral holdings (established in the 1850s) and consists of a vast complex of volcanic hills and rocky gorges sculpted into red rhyolite ‘organ pipes’ more than 1500 million years ago. Although ancient rivers once scoured these stony hills, there are no permanent streams in the park today and water is a scarce commodity. 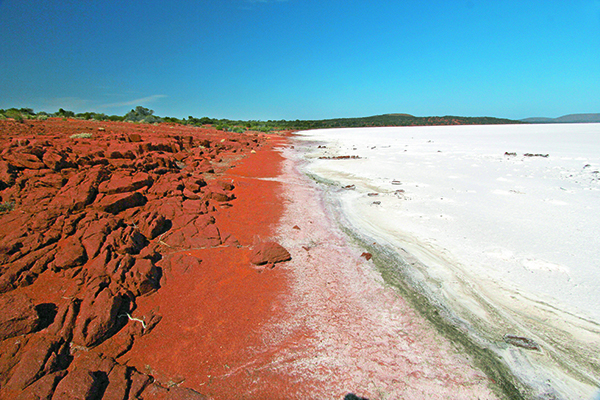 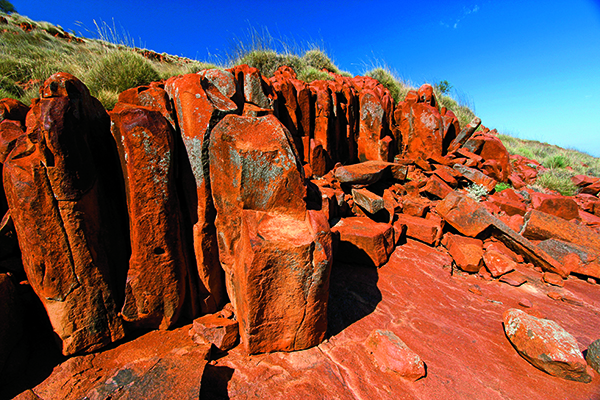 The Parnkalla and Malkaripangala indigenous people once occupied the Gawler Ranges but were displaced by European pastoralism to government depots at Fowlers Bay and Port Lincoln. Eyre named the ranges after the then governor of South Australia and recorded the first sighting of SA’s floral emblem, Sturt desert pea (Swainsona formosus), which he described as ‘a most splendid creeping plant… and very beautiful’.

Mt Ive Station, 247km west of Port Augusta, was established in the heart of the Gawler Ranges in 1864. The Newton family purchased it in 2002 and has continued the pioneering tradition of running merino sheep on its 93,000ha station, in conjunction with Mt Wedge Station further south. It is the only property in the region that caters for visitors and offers private access to some of the most spectacular scenery in the ranges.

The country hospitality here includes camping (powered or unpowered) or shearing quarters’ accommodation supported by a host of facilities, such as a large camp kitchen, dining/recreation room, hot showers, a basic kiosk/liquor store and Eftpos. Fuel is also available and comes in handy after depleting on-board supplies on the many kilometres of private station tracks to numerous historical and geographic landmarks.

Lake Gairdner is the jewel in the crown of the Gawler landscape. Nestled among deep red volcanic hills and sand dunes, this brilliant white crystal basin is considered to be Australia’s fourth largest lake when flooded (and second largest salt lake when dry). It is more than 160km long and 48km wide, with a salt crust more than 1m thick in some places.

Ironically, this beautiful, serene location is also the home of Dry Lake Racing Australia, with many world speed records being made here. The annual event in March (when the lake is dry) attracts motoring enthusiasts from across Australia and during Speed Week a canteen and kiosk are opened at the edge of the lake serving breakfast, lunch and dinner.

Gawler Ranges National Park is 55km north of Wudinna. Access is via Wudinna, Minnipa and Kimba on the Eyre Highway. Mt Ive Station is about 247km west of Port Augusta.

The majority of tracks within the park are recommended for high clearance 4WDs, although high clearance 2WDs may access some areas. All tracks and roads can become impassable after rain.

The best time to visit is the cooler months, between March and October.

The national park has seven bush camping areas with minimal facilities, suitable for tents, camper trailers and offroad caravans. Vehicle entry and camping fees apply and a National Parks Pass is available for this park. Campers are advised to be self-sufficient and carry adequate supplies of drinking water.

Mt Ive Station offers a range of accommodation, including a spacious campground with shady powered or unpowered sites, with a communal kitchen, barbecue area, dining/recreation room and hot showers. The station has a basic kiosk, liquor store, fuel and Eftpos facilities.