Of all Australia’s capital cities, Adelaide is unique in having several caravan parks close to the city centre. Despite having no major freeways through the city, central Adelaide traffic is still relatively free-flowing compared with larger cities.

If you are interested in exploring Adelaide’s city centre, Adelaide Caravan Park – a finalist in the Australia’s Best Holiday Park competition (see page 180) is a great place to stay. Located in the inner suburb of Hackney, this caravan park has a charming location on the banks of the River Torrens, nestled in leafy parkland. The surrounding area has lots of quaint historic cottages and just a few hundred metres from the park entrance is a historic pub. 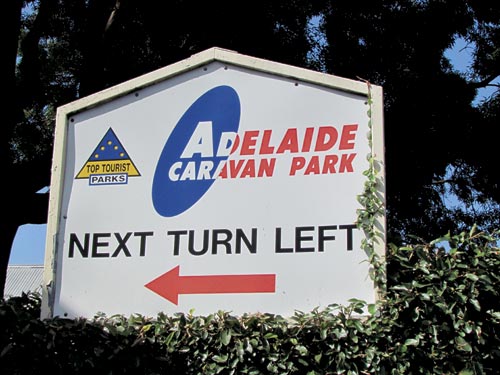 PARK WITH A PAST

Though not as old as the pub or the heritage cottages, Adelaide Caravan Park is still a piece of history in its own right. Established in 1946, it is one of the oldest surviving caravan parks in Australia and has, remarkably, been owned by the same family over the decades.

The current owners, Margaret and Richard Davis, are the daughter and son-in-law of the original owners. Margaret’s parents, Tom and Daphne Holland, started the park in what was originally their backyard and gradually bought up adjoining property as caravanning became more popular. Margaret grew up in the park and the original family home is still there.

Adelaide Caravan Park originally catered to interstate visitors and country folk who were visiting Adelaide for business and shopping. It still caters to that same mix of travellers, except now international visitors in campervans and motorhomes also use the park.

As you would expect for an inner city location, the park is not large and has about 30 sites and 40 cabins. Each caravan site backs onto the perimeter of the park and the caravan park staff help all visitors reverse into their allocated space. There is plenty of shade, and facilities include a nicely landscaped swimming pool, two covered barbecue areas and a large and exceptionally clean laundry.

Access to the river bank is through the adjoining public park which has barbecues and play equipment for children. Taking a pleasant stroll up the river and calling into the cafe opposite the park for a coffee is a great way to start the day.

NATURE IN THE CITY

From the caravan park, you can walk or cycle in both directions along the river on the Linear Trail, which is a walking and cycling path that follows the river from the sea to the foothills of the Mt Lofty Ranges.

But to begin our city centre sightseeing, we crossed nearby Hackney Road and headed away from the river across the Botanic Park. This enormous area of English-style parkland, which is sometimes compared to Hyde Park in London, is dotted with large old trees, including some plane trees, which were planted in 1874.

Crossing Plane Tree Drive brings you to the northern entrance of Adelaide Botanic Garden. This garden has a number of unique environments to explore, including a conservatory, a palm house and a shade house. You can walk down the oldest avenue of Moreton Bay fig trees in Australia, and then wander around past the rose garden, lotus pond and cactus garden, or join a free guided tour that departs every day at 10.30am from the visitor information centre.

The glass conservatory, which is one of the largest in the world, contains an interesting display of rainforest plants from northern Australia. The Palm House is a restored 19th century glasshouse that was bought to Adelaide from Germany in 1875. The Palm House now features plants from the island of Madagascar.

Leaving the botanic garden by a gate in the south-west corner, it’s just a short stroll along North Terrace to the heart of the city. All Adelaide’s important cultural buildings are along this street so you will pass Adelaide University, the art gallery, museum and library. It’s worth checking what’s on at the art gallery, because during our visit to Adelaide the gallery had a special exhibition of Turners from the Tate Gallery in London. The exhibition of paintings by this famous 19th century landscape painter was part of the Adelaide Festival, which is held in March every year.

Many of South Australia’s most famous citizens are honoured with statues and monuments along North Terrace. Douglas Mawson, the Antarctic explorer, is remembered with a bronze bust outside the University of Adelaide, where he was a professor of geology. Visit the In the Footsteps of Sir Douglas Mawson exhibition at the South Australian Museum to learn more about Mawson’s epic journeys by dog sled across Antarctica.

Further along North Terrace is a bust of Adelaide-born scientist Howard Florey, who was a joint winner of a 1945 Nobel Prize for his role in the discovery of penicillin. Sir Robert Menzies, Australia’s longest-serving prime minister, said: “In terms of world wellbeing, Florey is the most important man ever born in Australia”.

The State Library honours another famous South Australian, with a display of cricket bats that belonged to Sir Donald Bradman. Although born in NSW, Bradman spent most of his adult life in Adelaide and there is a statue of him in a garden at the entrance to the Adelaide Oval on the north side of the river. Unfortunately, redevelopment of Adelaide Oval means that both the Bradman statue and the cricket museum at the oval are inaccessible until some time in 2014.

For a change from museums, take a walk along Rundle Mall, Adelaide’s main shopping street. Scattered along the pedestrian mall are some pieces of sculpture, including a collection of four bronze pigs. In Rundle Mall, there is also an interesting, though well-hidden, museum. Located inside the beautifully restored Adelaide Arcade, the museum details the history of this intriguing building, which has its own unique coat of arms and had music especially composed for its opening in 1885.

Crossing the Torrens on King William Road Bridge takes you to more parkland, monuments and historic buildings in North Adelaide. St Peter’s Cathedral, completed in 1878, overlooks the rose gardens and stately trees that surround the war memorial. In one corner of the parkland is a memorial to the Smith brothers, Ross and Keith. These early aviators were the first to fly a plane from London to Australia in 1919.

The walk back to the caravan park along the river is a very pleasant one. Lookout for the bats roosting in the trees near the entrance to Adelaide Zoo. The zoo itself is famous for its pair of Giant Pandas from China. Since just about everything else mentioned in our walk around Adelaide has been free to enter, you might like to splurge on a zoo visit.

Once past the zoo, leave the walking path just after passing under the Hackney Bridge. This site was the location of one of Adelaide’s oldest flour mills. It’s just a few hundred metres down Richmond Street to the Adelaide Caravan Park entrance and the end of our tour of Adelaide’s beautiful parks and interesting historic monuments.