THE WEIRD THING is that I’ve never seen or heard Port Lincoln promoted as a holiday destination or, come to think of it, even as a place worth visiting. But let me tell you, if you book into the Port Lincoln Tourist Park, you’ll have found a very comfy base from which to explore the region’s many attractions.

We visited Port Lincoln as part of our Gulf to Gulf Adventure (see page 32) in March this year, a 10,000km journey in which we travelled from the Spencer Gulf to the Gulf of Carpentaria and back. Our home-away-from-home on this caper was a Goldstream Vacationer and nowhere did we feel more at home than in Peter and Maria Appleton’s fully equipped, four-star Top Tourist Park.

The park has been running since the 1950s. Back then it was covered in a prickly weed known as three-cornered jack, but today it’s owned by successful local businessman Sam Sarin.

Peter and Maria have been managers for the last five years, during which time the facility has benefitted from Sam’s considerable resources. But more about that in a moment.

The site comprises 33 acres, situated on terraced land on the shores of Boston Bay. The fact that the site slopes sounds like a disadvantage but, in fact, it affords every van owner a clear view of the bay and the ocean beyond.

Peter and Maria are nothing if not innovative with a park that hosts up to 30,000 guests a year. The busiest times are Easter and Christmas where numbers can swell to around 620 adults and 320 children.

Most, if not all, the van sites are drive-through. They’re very large, too, and although their size has slightly reduced the overall number of sites, it eased the difficulty of manoeuvring ever-larger caravans in a restricted area.

“With today’s bigger vans and annexes, and larger camper trailers as well,” says Maria, “it’s important that we make it as easy as possible to get in and out.”

The park has 123 van sites, 45 cabins, plenty of space for tents, and a number of permanent vans where guests, weary of travel and fond of Port Lincoln, have set up home for good. Some park guests have been living on-site for about 17 years, says Maria.

Extensive redevelopment of the site has already been undertaken but more is planned. Existing sites were enlarged some time ago but Peter Appleton intends to enlarge even more sites. A new camp kitchen will also be built, he says, along with a new amenities block towards the rear of the park, and a big games room for kids, right next to the barbecue area from where parents can keep an eye on the little buggers.

And if that’s not enough to get you interested in visiting this delightful park, there’s plenty to do once you’ve lobbed into Port Lincoln and set up the van. For the land lovers there are wildlife parks, forests, wineries and tours of all kinds. For the more adventurous, my travelling companion, John Willis, and I motored out to Neptune Island on the Calypso Star, at which point we climbed into an aluminium cage with four other crazed tourists and dived with great white sharks. (That’s not quite true. You don’t actually ‘dive’ with great white sharks; you hide behind the bars while great whites glide around you, bored by everything until it turns out to be food.)

We also swam with blue-fin tuna in huge pens offshore. It was amazing. The crew gave us each a pilchard, the tuna’s favourite food, and we held it out until a silver flash whizzed passed our ears and grabbed the bait. You have to wear rubber gloves and booties or the tuna will remove a finger or toe. They’re not fussy. Anything that looks like bait goes down the throat of this impressive fish, and at 100km/h.

I wished we’d gotten to swim with sea lions as well, but we ran out of time. Tourists who’d done that said it had been one of life’s more memorable moments. Apparently the sea lions are playful and friendly and love to put on a show, unlike great white, who are most animated when they’re eating.

If you’re feeling a bit cosmopolitan, there are plenty of nice restaurants and cafes in Port Lincoln, and good coffee everywhere. I found it fascinating to walk around the fishing-boat docks, too. This town was founded on the back of the tuna and still relies heavily on it for sustenance. 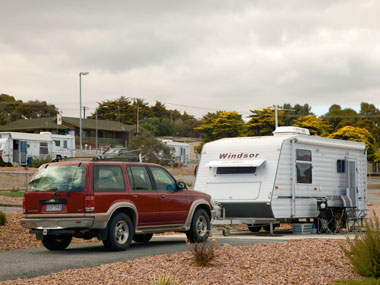 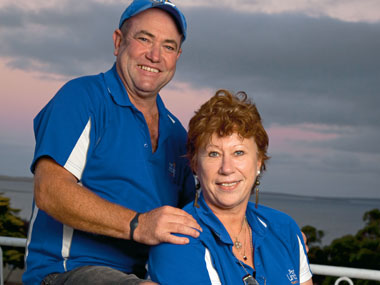 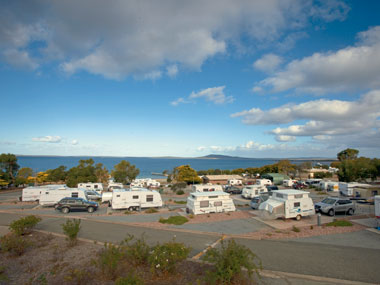 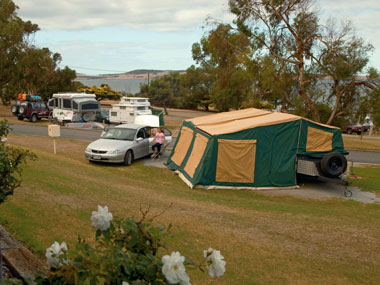 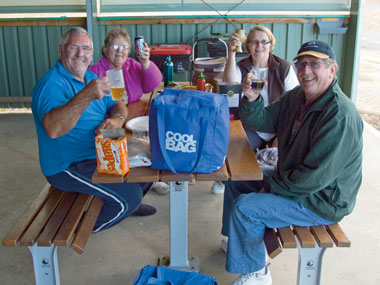 With a population of around 14,000 people, Port Lincoln is a commercial hub for SA’s Eyre Peninsula. For general touring information, visit www.visitportlincoln.net

Port Lincoln Tourist Park is at 11 Hindmarsh Street, Port Lincoln, about 650km from Adelaide. It is a four-star member of Top Tourist Parks. For more information, phone (08) 8621 4444 or visit the website www.portlincolntouristpark.com.au