AFTER A WEEK exploring the lower lakes and parts of SA’s Coorong which are accessible by vehicle, we felt it would be wonderful to see the Murray River actually flowing into the sea, something that hasn’t happened much in the last decade.

The flood rains in Qld and Vic at the start of 2011 had flowed down the Darling and the Murray, filling lakes Alexandrina and Albert, and the Coorong.

It’s hard to imagine now, but at the height of the drought authorities had been planning to flood the lakes with sea water in order to cover the toxic acid sulphate soil that had been exposed as the lakes dried out.

We settled into a large grassy site at the Goolwa Camping and Tourist Park, where the enterprising new owners offer a discount to any loyalty club and CMCA members. The park is within walking distance of shops and the River Port of Goolwa, where we booked on the 4.5-hour Coorong Adventure Cruise on board the Spirit of the Coorong.

This fifty-seat catamaran is an ideal boat for this type of cruising because it’s very stable and has large viewing windows and an open upper deck.

Shortly after leaving port we saw the little sailing boat used in the film Storm Boy, as well as the bay in which it was filmed. We then approached the Goolwa Barrage. Completed in 1940, this is one of a series of barrages built to stop sea water intruding into the lakes system. As much as 90 per cent of the SA population now depends on the fresh water held behind the barrages. All the gates were open to allow excess fresh water to flow into the sea, flushing out the Murray mouth.

This is a very impressive structure and as we passed through the loch we could see where the large concrete blocks will be put in place to close the gates when the flow diminishes. To our delight, a large fur seal was reclining on the structure and graciously allowed us to take a photo.

Lunch was served as we cruised to the Murray mouth, and our skipper imparted lots of interesting material. He was a fount of information, answering all of our questions and identifying all the birds we saw.

Further along, in the Coorong itself, we docked at Godfrey’s Landing. One of our crewmen walked with us across the sand dunes to the Southern Ocean beach, showing us a number of bush tucker fruits. On the beach, he demonstrated the technique of shuffling in the water to disturb and catch cockles (known as pipis to people from Qld).

You don’t need a licence to collect cockles, but must use only your feet and a small net to catch them, and they must be at least 3.5cm wide. More than 3000t of cockles are collected annually from the Younghusband Peninsula for the restaurant trade. Fishing is also still an important industry here, and we can heartily recommend the Coorong Mullet.

As enjoyable as all of this was, the highlight of the cruise was our stop-off on the return leg. This was when we were able to walk on the cockle-littered sandbar at the Murray River mouth, which was a very special moment. This spot has the same sort of iconic feel as the furthermost northern, southern, eastern and western points on the mainland.

The mouth of the Murray migrates according to conditions and we could see a lot of erosion on the eastern side. It was wonderful to see the fresh water flooding into the sea. When we were there, we were told 50,000 megalitres flowed through every day, down from 93,000 at the height of the 2011 floods.

To the south of the mouth is Encounter Bay, where famous navigators Matthew Flinders and Nicholas Baudin met during their circumnavigations in 1802. Curiously, neither of them noticed the Murray mouth.

The stunning scenery and historical importance of this area add to the appeal of this cruise. The whole experience met all of our expectations, and at a very reasonable price. Next time we visit Goolwa we plan to take the longer six-hour cruise, which also includes a visit to a significant Aboriginal site, or one of the sections of the Murray River Run. 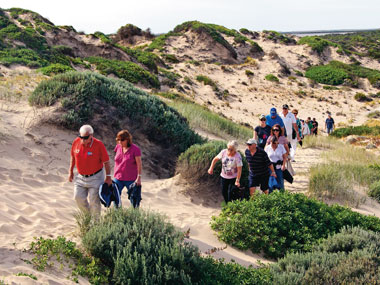 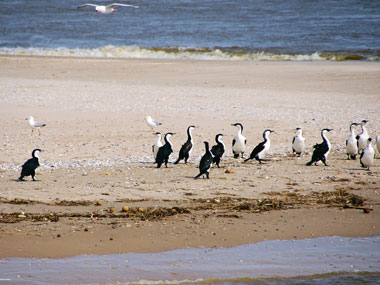 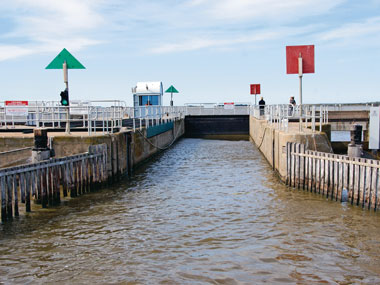