Denyse and I lived in Bowen, Qld, until 1988, when we sold our home and charter yacht, purchased a new offroad camper trailer, hooked it up behind our tow vehicle and set off on our second ‘Round Oz’ trip, looking for a new home. Nine months later, we ended up in Mackay, Qld, only 200km south of Bowen, finding nowhere we liked better!

Mackay was a very prosperous city with excellent services for its size, relying on sugar cane, coal mining and farming. Since the end of the coal mining construction boom, the city has lost an estimated 20,000 people, mainly those employed in the mining and associated industries. But while the mining is in a downturn, tourism has started to flourish, with an international airport due to open late this year or in early 2017.

One of the reasons we chose to live in Mackay is for the climate. It’s not as tropical as areas further north and our winters are glorious. It is the middle of winter as I write this and the day is sunny with no wind and a very pleasant 27°C, with the minimum for tonight predicted at 16°C. 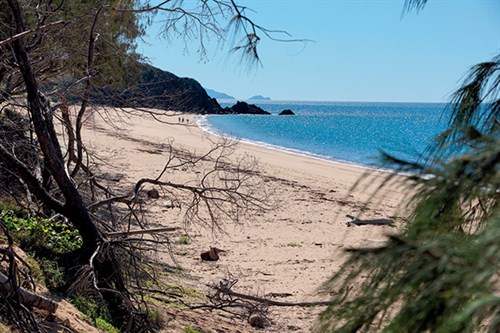 Mackay is one of the few towns in the country that has a true blue-water river, and the most is made of this with a paved walkway for several kilometres, starting in the city centre. Next to the river is Bluewater Lagoon, which has three swimming pools, a water park and slide, a huge bucket drop, and free entry.

The marina has a promenade featuring several restaurants that look out over the moored boats, and a great fish and chip shop serving only local fish. You can walk or drive along the breakwater, looking back over the marina. The breakwater is a popular fishing spot, and you can catch mackerel, barra and many other species.

Across the road from the marina entrance is the long, patrolled Harbour Beach, with a surf club and grassy picnic area containing free barbecues and shelters. This road continues on to the Pioneer River mouth – another great fishing spot.

On the south side of town is the visitor information centre, which is soon moving to the botanical gardens nearby. The gardens look out over a lagoon containing many water birds, which is a breeding ground for barra and other marine species.

Cultural pursuits are well catered for by the Mackay Entertainment and Cultural Centre as well as Artspace Mackay. Several markets operate on a regular timetable, including the new farmers’ market. This has been quite a hit with the locals, selling out of stock when it first opened.

Several bowling clubs, such as the large North Mackay Bowls Club with 18 undercover rinks, and three golf courses attract the sports-minded. Outdoor eating is popular in the city and marina, and there are many clubs with good restaurants. Tennis, croquet, football and cricket clubs are also active in Mackay.

There are two hospitals, one public and the Mater Private, with a range of medical specialist services available. The previous shortages of GPs and dentists are over, and same day appointments are available. Warehouse pharmacies provide prescriptions and health care items at major city prices.

Mackay has many long sandy beaches but there are big tides (up to 6m), so high tide is the best time to visit. Lamberts Beach, with its tavern, is a deeper beach, where you can swim at any tide. Another iconic Mackay beachside ‘must do’ is lunch at the Eimeo Pub, overlooking the Coral Sea.

Eungella National Park (NP) is just over an hour’s drive west through the very picturesque Pioneer Valley, following the Pioneer River, with cane fields and rural views. On the way to the park, detour to Teemburra Dam, stocked with barra and sooty grunter (black bream). There is a picnic spot and a launching ramp here. You pass through several small country villages along the way, and the old Pinnacle Pub is famous for its pies and well worth stopping for.

Eungella NP offers rainforest walks, picnic areas, magnificent views, a running river (Broken River) and two main platypus viewing areas. If it’s cloudy, you may be lucky enough to spot a platypus during the day, but peak viewing times are dawn and dusk.

Passing through Eungella, the road takes you out past Hazelwood Gorge, similar to Porcupine Gorge in Hughenden, but much less well known. You will have to ask for directions, as it is not advertised or signposted.

The road continues on to Eungella Dam, with a camping area and great barra fishing. You need a fishing licence for any impoundment fishing in Queensland: the licence fees pay for the restocking of the dams with barra and other species.

Camping is available at Broken River in Eungella NP, but you need to pre-book and pay online or at a national parks office. These sites are suitable for tent campers or camper trailers mainly, although there are larger unpowered sites at Crediton, a little further on.

In addition to the Teemburra and Eungella dams, there’s a third dam, Kinchant, closer to Mackay. There is a small van park and tavern here, as well as scenic picnic areas. Although this is a relatively small dam, it is also well stocked, and I have caught a heap of sooty grunter and a couple of big barra there. It is popular with water skiers on the weekends, so best to visit mid-week if you want to fish.

There are a couple of charter vessels in Mackay, doing fishing trips and also regular day trips to Keswick Island. Check with the visitor information centre for availability of accommodation if you wish to stay on the island.

There are several walking tracks, as well as long beaches and amazing rock formations formed by volcanic activity. You can walk across the causeway to Wedge Island at low tide, and there is good oystering as well as fishing. Just remember, in Queensland you must eat oysters where they are picked: don’t bring them back to your campsite.

South of the city there are more beaches. Take a picnic to Grasstree Beach or Sarina Beach, or continue on to Cape Palmerston NP, south of Sarina. You will require a 4WD to get in to the camping spots or, alternatively, stay at Cape Palmerston Holiday Park, one of our favourite spots. This is a relatively new van park, close to a quiet beach and the national park. A two-rink bowling green is planned for later this year or early in 2017.

The full feature appeared in Caravan World #554 August 2016. Subscribe today for the latest caravan reviews and news every month!