When it comes to iconic pubs, we feel that the old Royal Hotel at Eromanga, in far south-west Queensland, has well and truly earned its place on the esteemed list of Aussie pub royalty.

The town of Eromanga is reportedly the furthest town from the sea, leading to the pub’s claim of the same feat. Indeed, it does feel like that when you visit the area.

The landscape around Eromanga consists of vibrant red soil with scant, scrubby vegetation and a few stunted eucalypt trees. In fact, the name Eromanga is thought to have originally come from an Aboriginal word meaning ‘hot windy plain’. It has extremely hot weather in the summer, so the best time to visit is in the winter touring season, or the shoulder months. We visited in early May and the weather was fine and clear, with warm days and cool nights. 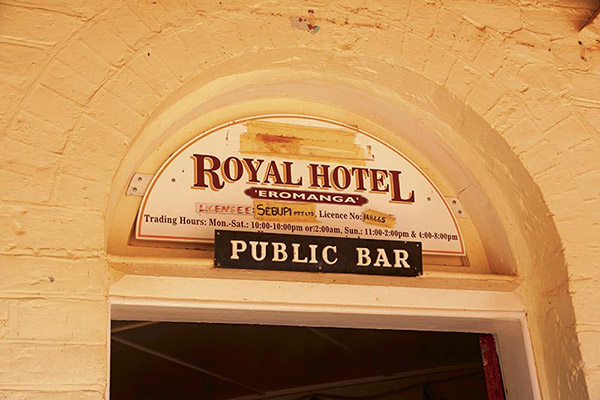 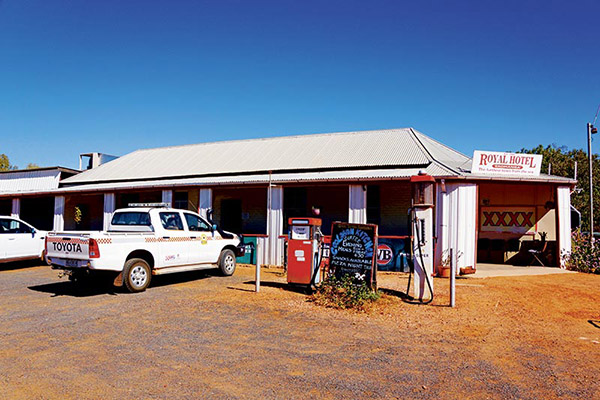 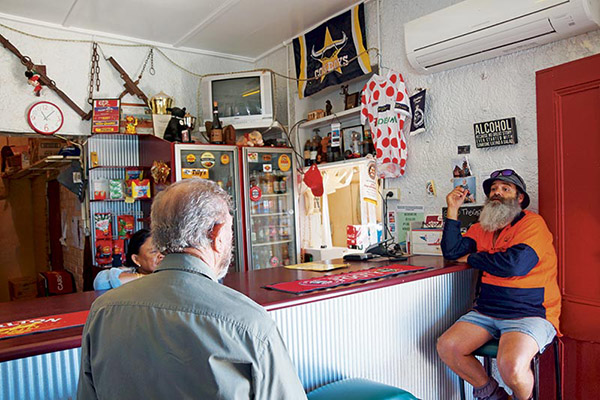 Once a Cobb and Co staging post, the pub has had a succession of licensees over the years, and its fortunes have waxed and waned with those of the community itself. It was built in 1885 of locally-made mud bricks, some of which were fired while others were air dried. The mortar was made by burning limestone. All the external bricks have been painted to protect them, but the original surface is visible on some of the bricks inside the pub.

Despite being such a remote place, opal miners flocked to the area around Eromanga in the 1880s, when the town was known as ‘Opalopolis’. Jewellery made with local opal, as well as a century-old trolley used in a local opal mine are on display in the hotel.

You can see the impressive opal-encrusted memorial to opal miners in the Opalopolis Park beside the pub. The Eromanga Living History Centre is beside the park: pick up a key from the hotel to view the displays and watch the well-produced video describing the history of the area.

Pioneering sheep and cattle farmers came to the area in the 1860s. In the heyday of the sheep and cattle industry, the pub was the focus of the Eromanga rodeo, camp draft and gymkhana. Unfortunately, these events are no longer held, but there are regular community barbecues held at the hotel.

The hotel was in a very run down condition when it was purchased by John Walker and his family in 1980. It took years of work to bring the pub up to its present condition. John still lives in Eromanga, but the pub is now run by his son Scott with wife Diane. Scott enjoys scratching around for opal and, if you’re lucky, he may tell you about the more productive areas. We were very fortunate to have a drink with John while we were in Eromanga. This quietly-spoken man is a mine of information about the history of the pub and Eromanga itself.

When we arrived at the hotel just after opening time, Betty Marchant was there enjoying her regular morning coffee (and the pub does make excellent coffee). She is a long-term local who ran the post office for years and has been honoured for her services to the community. She told us interesting snippets about the area and the hotel itself, including where to find Aboriginal wells nearby.

We enjoy having a meal in the dining room of old hotels and thinking of past clientele, like the Cobb and Co passengers who must have been very relieved to have arrived at Eromanga after a very hot, bumpy and uncomfortable trip. We were told that the pub prides itself on its large steaks. Our meals were cooked to perfection with lots of veggies, and were very good value – as were the drinks. We were very surprised that we didn’t have to pay inflated prices for our meals and fuel in such an isolated place.

The discovery of large amounts of oil in the area has provided income for the hotel and the town. Over a million-and-a-half barrels of oil are produced annually at the local refinery. Cheap fuel is available at bowsers just outside the refinery ($1.39/L for petrol and diesel when we visited, which was the same price as Brisbane), though we were told this fuel does not come from the refinery, but is trucked from Quilpie, about 100km to the east.

While Eromanga is extremely isolated, it is an easy place for caravanners to visit because the Cooper Developmental Road from Quilpie through Eromanga to Noccundra is all sealed. Most of the way, it is single lane bitumen but the edges are generally very good. The usual road ‘rules’ apply: give way to any vehicle larger than you. We saw very little traffic, but when we do see a truck approaching, we find a convenient place and pull right off the road. The locals in their 4WDs do slow down and give you the road, often to the extreme of driving on the other side of the guide posts! We were not exposed to showers of stones at any time and had no windscreen damage on the whole trip.

The site of present day Eromanga was on the edge of the Eromanga Inland Sea and very significant dinosaur fossils have been found recently. Huge bones from the largest dinosaur found in Australia (a titanosaur they named Cooper) have attracted the interest of palaeontologists, and it is hoped that the proposed Eromanga Natural History Museum, to process and display the fossils, will go ahead without too many further delays. Certainly, the caravanners attracted to the area to view the fossils would assist in ensuring the future of Eromanga and its wonderful old pub.

The Royal Hotel is in Eromanga, about 100km west of Quilpie and about 160km north of Noccundra on the Cooper Developmental Road in south-west Queensland. The road is single lane bitumen, with the edges mostly in very good condition and there is very little traffic.