It’s not every day you get to see a camel race, a pig race or a ute muster. And rarely do all three occur at the same venue on the same day. We had never seen any of these spectacles before, individually or collectively. So when we learned such an event was scheduled at Mitchell in Queensland’s Western Downs, we decided to hitch up Tikay (our Kimberley Karavan) and spend a few days there to check out the action.

For more than 19,000 years the site of Mitchell, on the banks of the Maranoa River, has been the hub of a travel network connecting a vast chunk of outback Queensland. The presence of more or less perennial water and abundant wildlife were integral parts of the Mandandanji and Gunggari Aboriginal cultures that flourished here in ancient times.

These same natural bounties also attracted Major Thomas Mitchell when he brought his fourth expedition through here in 1846. Mitchell camped on the Maranoa and established a depot, in the charge of Edmund Kennedy, that would be the base for his further exploration to the west. A memorial now stands on this site about 35km upstream from the present township. 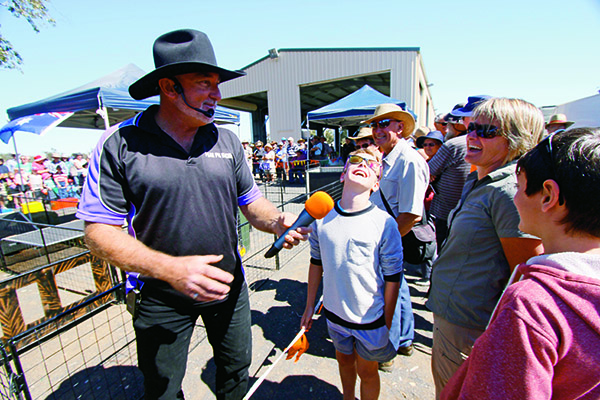 On the western outskirts of town, Neil Turner Weir is an impressive concrete structure built on the Maranoa River in 1985 to provide an aquatic recreation area and augment the town’s water supply with its 2000-mega-litre capacity. Unfortunately, during the disastrous floods of 1990 (8.47m), the weir filled with about 700,000 tonnes of sand washed down from the headwaters, making boating and water skiing impossible.

With the assistance of a government grant, however, the weir was dredged and is once again a beautiful recreation area and tranquil sanctuary that attracts a variety of birds.

On the morning of our visit, many caravans and camper trailers were in residence enjoying the free camping along the river. We counted more than 40 vehicles on grassy sites among the trees and the level, open spaces near the weir but, as one camper told me, it was so quiet you wouldn’t know you had any neighbours at all.

Mitchell’s other major water source is at the renowned Great Artesian Spa. Opened in 1998, this aquatic centre is Australia’s largest open-air spa, drawing water from the Great Artesian Basin (which underlies about one-fifth of our continent) to fill a large pool at around 38°C.

A bit further west, the ‘Kenniff Courthouse’ is an original weatherboard building that now houses a museum showcasing Mitchell’s most celebrated felons, Patrick and James Kenniff. These notorious horse and cattle rustling brothers were captured south of Mitchell in 1902 and tried for the murders of Constable George Doyle and Albert Dahlke, the station manager at Lethbridge Pocket in the Carnarvon Range.

The Kenniff’s trial is significant in Queensland’s legal history as being one of the few in which white men were convicted on the sole testimony of a black tracker, in this case Samuel Johnson. Patrick was hanged in 1903, while James was released after 12 years of imprisonment. He died in 1940.

The honour of commencing the racing agenda for the day went to some wee little piggies, which displayed no pre-race jitters whatsoever as they milled about in their specially designed enclosure. The rules of pig racing were explained to the assembled crowd before a fast and furious calcutta was conducted by experienced auctioneers wearing chequered shirts and pristine Stetsons.

The little porkers, each sporting their distinctive racing colours, were sold off one by one, thereby raising funds to be divided, half as prize-money to the winning syndicate and the other half as revenue for the Mitchell Show Society. Formalities over, the first race got underway amid the cheers and urgings of the surrounding spectators and climaxed at the ‘finish line’, a bowl of piggy sweets hidden within the inner sanctum of the maze.

Next was the first camel race. This was preceded by another Calcutta and the instruction of each syndicate’s nominated rider, none of whom had had any previous experience riding a camel, let alone racing one. Disclaimers duly signed, the jockeys mounted their thoroughbreds and were led to the starting gates by the cameleer and trainer, who earlier in the day had assured me that a camel could run as fast as a horse.

It has to be said, however, that none of the contestants on the track that afternoon wound up to more than a dignified canter, no doubt to the great relief of their novice riders. The spectators didn’t seem to mind and the crowd standing three-deep along the fence rails cheered each race as though it was the Melbourne Cup.

Meanwhile, entrants with their beloved utes mustered in the centre of the showground field to be inspected by automotive enthusiasts and the judging panel. There were seven classes in the competition, including Street Ute, Chick Ute, Feral Ute and Classic, the winners of each class being eligible to proceed to the 2015 state finals to be held in Brisbane at the Royal Queensland Show. The number of entries was down on last year’s event but the winners were no less deserving – the Classic was a gleaming, sky blue 1966-vintage Holden, the Feral was a mud-spattered Ford tray-back, the Chick was a bride-to-be on her hen’s party, and so on.

Mitchell is on the Warrego Highway, 587km north-west of Brisbane and 177km east of Charleville.

The Warrego Highway is a sealed all-weather road but may be impassable at Mitchell due to localised flooding of the Maranoa River.

Mitchell is a year-round destination but expect it to be hot in summer and cold in winter.