Cape Tribulation Camping in Far North Queensland is the only absolute beachfront caravan park between the Daintree River and Cooktown and, given its location and its captive market, it’s surprising that there isn’t a kilometre-long queue of caravans and RVs lining up to get in.

The reality is that few caravans take the ferry across the river and venture up to the end of the bitumen, which turns into the steep, often rough, muddy or dusty 4WD-only Bloomfield Track for the Cape Tribulation headland beyond the tourist car park. There are good reasons for this.

The road north of the river has only been bitumen all the way to Cape Tribulation since 2002 and the last bridge across the often rain-swollen Cooper Creek was only completed in 2011, so it remains near-virgin territory for most sealed-road caravanners. 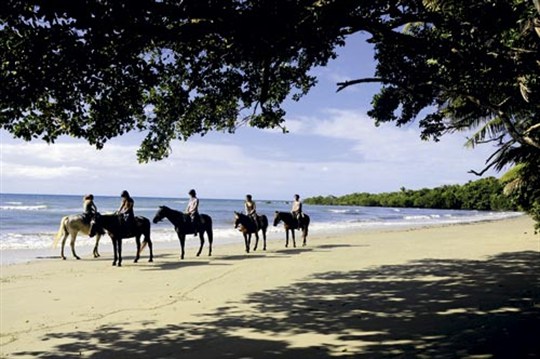 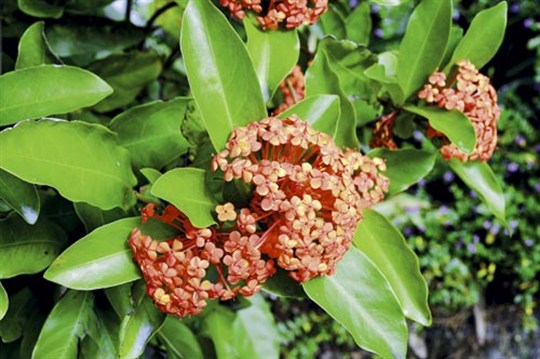 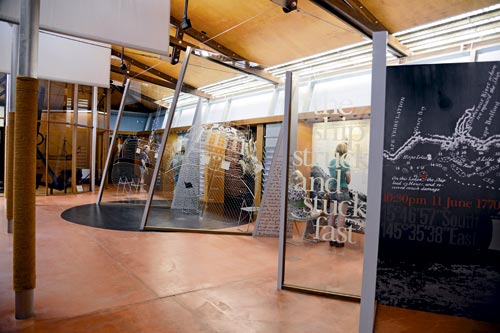 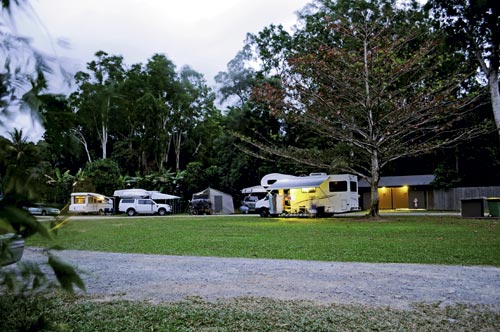 Although it’s sealed, the road is steep, twisting and narrow in a couple of parts, meaning you need to be conscious of where to position your van on the road and be aware of roadside trees and oncoming tourist buses. But it’s no more demanding than manoeuvring into any treed caravan park, and the completion of the bitumen road to Cape Tribulation has opened it up to caravanners.

TRAVELLING TO THE DAINTREE

Our 15m-long luxury rig, consisting of a 2014 Jeep Grand Cherokee turbodiesel towing a top-of-the-range Concept Ascot SX, had no problems and, apart from prudently giving way to a few larger vehicles on one twisty section, the trip to Cape Trib was uneventful.

The only hassle involved getting on the single ferry that works the Daintree during peak season on a Saturday, when an endless stream of vehicles was heading south. The ferry travels painfully slow and, with the queue of traffic, it took us an hour from arrival at the ferry station until our wheels had touched the other side. On the return trip, however, we drove straight on and the travel time was less than 10 minutes. But, on a positive note, the cost for our return trip was just $31.50 – a bargain compared to many other water crossings we have encountered.

Once you get to Cape Tribulation Camping you have two choices – both of them good. The grassy park spreads along the beach, immediately behind a line of palm trees that shields it from the often persistent south-easterlies that blow along the east coast.

The beach is no more than a 40m walk from anywhere in the park through the many formed and free-form tracks through the trees. Once there, you are rewarded with a fabulous view of Cape Tribulation itself, just a 30 to 40-minute walk along the beach at low tide. I emphasise low tide because the Great Barrier Reef, just 19km due east, has created a tidal beach that can be as much as 150m away or lapping at the base of the palms.

The World Heritage-listed Daintree Rainforest is the second largest rainforest system in the world and is the centre of Queensland’s wet tropics region. It is very rarely dry and, with around 190 wet days a year, you can reliably expect rain if you stay long enough.

The region is home to the Kuku Yulanji people who have weathered some very difficult times throughout the history of their contact with Europeans.

Cape Tribulation was named by James Cook in June 1770 after his ship scraped a reef north-east of the cape. European settlers started arriving there in the 1930s but they found the rainforest a difficult place to get established. In the 1960s, a rough track was bulldozed and the first vehicle access created, although the road wasn’t sealed all way to the cape until 2002.

While the first backpacker hostels started to spring up in the mid-1980s, resorts and eco-lodges soon joined them for more upmarket tourists in the 1990s. But, compared to most famous tourist destinations along coastal Queensland, Cape Tribulation is still an off-the-beaten-track destination.

WHEN TO VISIT CAPE TRIBULATION

The best time to visit is during the dry season, between July and November, when the humidity is low and swimming is possible on open sections of beach well away from the mangroves that can hide saltwater crocs.

During the wet season, from February to April, marine stingers are prevalent, but don’t plan to swim in the many creeks leading to the sea, as they are often infested with crocodiles!

WHAT TO DO IN THE DAINTREE

The best way to enjoy the full Daintree experience is to leave the caravan in the van park and explore the region with your 4WD. The Daintree Entomological Museum, showcasing the butterfly and beetle collection of lifelong collector Steve Lamond, is located 15km south of Cape Tribulation.

North of Cape Tribulation, the unsealed Bloomfield Track continues to the Bloomfield River, Wujal Wujal, Bloomfield Falls and Cooktown, but this road is often closed in the wet.

At Wujal Wujal, you can take a short stroll to the spectacular Bloomfield Falls, or engage the Walker family via the local tourist centre to take you on an extended guided tour of the area.

If you are venturing further north, plan a stop for lunch at the classic Lions Den Hotel at Helenvale, just short of where the bitumen road from Lakeland leads to Cooktown.

There is a pub, two convenience stores and several restaurants at which to eat in the Daintree, but the standout is Wet, just a few hundred metres from the Cape Tribulation Camping turn-off. It attractions include an excellent bar and free wi-fi.

If you are into serious 4WD adventures, the CREB track winds its way through the Daintree Rainforest in a world class experience you should include once you have unhitched – provided you are an experienced 4WDer and your vehicle is in top condition and equipped with recovery gear.

It is the service access track for the Ergon Energy powerline to Cooktown and traverses a spectacular, yet sensitive, part of the Wet Tropics World Heritage Area from Wujal Wujal to the Daintree River through China Camp, about 10km on from the Daintree township.

Heading south from Ayton, near Bloomfield, the CREB winds its way first through open wooded ridges to Dawnvale station, before slowly working its way deeper into rainforest and mountainous terrain where it climbs and descends precipitously, eventually reaching the Daintree River.

Lush tropical rainforest, clear flowing streams, stunning waterfalls and spectacular views from ridge tops, make this one of the most exciting journeys you can do in the far north.

Camping is not allowed anywhere along the CREB Track except Roaring Megs Falls, which requires a permit in advance.

Travel on the CREB Track is extremely treacherous when even slightly wet, due to very slippery clay soils and extremely steep slopes. The dry time is June to September, but rain can fall at this time, as it did during our visit, closing the track indefinitely. The CREB Track is usually closed in the wet season and anyone considering travelling on this track should first seek additional information.

MORE INFORMATION ABOUT THE DAINTREE

Cape Tribulation is on the Cape Tribulation Road, roughly halfway between Cooktown (104km) and Port Douglas (82km) on Queensland’s north-east coast. It is about 140km north of Cairns and the road is sealed bitumen the whole way.

HOLIDAY PARKS IN THE DAINTREE