“It’s not like Sorrento!” she exclaimed, referring to the Victorian seaside getaway as she dunked her toe in the balmy brine of the Coral Sea as it washed lazily onto the palm-fringed stretch of paradise known as Four Mile Beach. “Much warmer!”

This encapsulates why residents of Australia’s southern states, most notably Victoria, drain to Far North Queensland from June to August each year in search of unseasonal warmth in the comfort of familiar and friendly Australian surroundings. 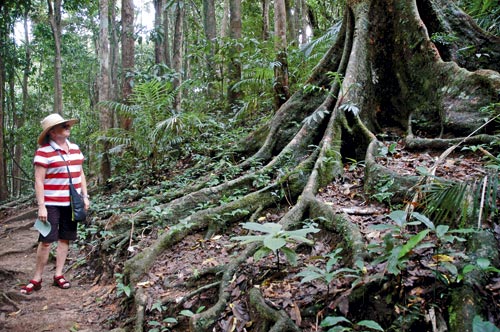 Cairns and Port Douglas bear the brunt of this annual insurgence – Cairns for the fly-in, fly-out families lured by cheap package deals, a decent dunking for the kids and a safe snorkel on the Great Barrier Reef.

Port Douglas, on the other hand, attracts the caravanners who can enjoy a similar beachside laid-back lifestyle to their cashed-up holiday apartment dwelling neighbours for longer, at a fraction of the cost.

This paradise promontory is the last northern frontier of ‘sophisticated’ north-eastern Australia – even more beautiful, cheaper and far less populated and pretentious than Noosa Heads.

Better known as ‘Port’ to the locals, the settlement 67km north of Cairns was founded in 1877 and was later named in honour of former Queensland Premier Sir John Douglas.

With the discovery of gold, the town looked set to become north Queensland’s major port and soon grew to a settlement of 12,000 people and 27 licensed hotels at its peak – until the gold ran out.

Prosperity seemingly returned in the late 1980s when the late entrepreneur Christopher Skase unveiled his new five-star Sheraton Mirage resort, which transformed Port from a sleepy seaside hollow into a sophisticated tropical playground for the rich and famous.

And despite the slump of the international market in recent years, caused by the GFC and the high Australian dollar, Port remains one of the prized jewels in Australia’s tourism crown.

While its glitter may be a little tarnished, nothing has changed, or is likely to change, its status as the closest town to the World Heritage-listed Great Barrier Reef and the Daintree Rainforest. There are 4WD and caravan-breaking roads a half day’s drive away if you must, wild rivers that flood unpredictably at the first sniff of moisture and enough things to bite, sting and otherwise hurt as they fall from trees if you are careless.

But the final word must go to the weather. The sun shone every day and we were never out of shorts, as the temperature was 23-26 degrees every day of our stay in July/August and dropped to a dewy 13 degrees at night, while the mercury in Melbourne spent most of its time 10 degrees cooler.

If you want to get to the Barrier Reef quickly and cheaply, Cairns is a closer option, but visitors to Port can explore the more distant, but far less populated Agincourt Reef aboard the various fast catamarans that operate from the marina on Dicksons Inlet. You can spend an equally impressive day on the Lowe Isles, while there are many more personal boating, fishing and sailing options.

Barramundi are as thick as flies in the rivers here, so bring your rod. But don’t pack your surfboard – thanks to the reef, there’s not a decent break north of Rockhampton. But the persistent south-easterlies that blow for much of the year provide perfect conditions for kite-boarding, making an investment in some lessons and kite hire an interesting Port activity option.

Most caravanners prefer just to kick back, though, and it’s hard to find a much better place during the Australian winter to do that.

WHERE TO STAY IN PORT DOUGLAS

Officially, Port Douglas has just two caravan parks – the Pandanus and the smaller Tropic Breeze – both on Davidson Street, which leads to the main commercial area centred around Macrossan Street. I’m not including the excellent Big 4 Port Douglas Glengarry Holiday Park, or the several ‘backyard’ parks that operate in the area, as the former is not within walking distance of Port Douglas (although there’s a free courtesy bus) and the latter are unregulated.

I’ve tried to put my finger on why Port Douglas unquestionably has the X-factor. For many, it’s a safe ‘last frontier’. It’s a popular stocking and recuperating town for those trekking further north up the Cape, whether crossing the Daintree River by ferry and continuing on the 4WD Bloomfield Track from Cape Tribulation to Cooktown, or taking the longer blacktop route via Mount Molloy, Mount Carbine and Lakeland.