As the Beach Boys crooned in their hit song Kokomo, “we’ll get there fast and then we’ll take it slow” pretty much sums up my travelling philosophy but perhaps less so than that of my long-suffering wife, Wendy. But when it’s a grey and frosty 11 degrees in Melbourne and the sun is shining and it’s 25 in FNQ, Wendy was only too happy to harmonise with Brian Wilson and his bros and for me to put pedal to the metal.

It’s around 3200km – and an extra 15 degrees Celsius in July – from Melbourne to Port Douglas, Qld. But it’s an interesting and relatively easy four-to-five day trek by caravan or motorhome if you fast-track it via the less-travelled inland route.

To make good time, it certainly helps to have, as we did, a tow car and caravan capable of maintaining 90-95km/h on the flat stretches. Our Jeep Grand Cherokee turbodiesel had no trouble hauling our 3.2t (laden) Concept Ascot SX at this rate, up hill and down dale. 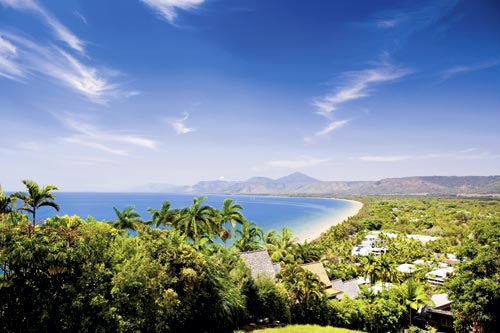 Plotting the fastest and most direct course to Cairns started with a Google Maps search that directed us via a combination of the Hume Freeway and Goulburn Valley Highway in Victoria, the Newell and Kidman Way in New South Wales, and the Mitchell, Landsborough and Great Inland highways in Queensland.

This sounds tricky, but it’s actually quite straightforward and fairly well-signposted for most of the trip, taking Melbourne travellers via Shepparton, Jerilderie, Bourke, Cunnamulla, Barcaldine and Aramac and Atherton on the Tablelands. But you do need to have an alert navigator in order to stay on message, as the signposts keep pointing you towards the larger towns nearer the coast, rather than the ones that will take you on a straight line due north.

Once we cleared Jerilderie, the roads were 110km/h for most of the way north and delightfully free of heavy traffic. Just as scarce were small towns with their frustrating 50km/h speed limits and, even worse for those towing caravans, 40km/h school zones.

No one would pretend that the relatively featureless farming country approaching Griffith, NSW, is scenic but, as a city boy, I find a flat treeless skyline and the absence of any sign of life an absolute tonic. To me it shouts ‘getaway’ and I truly feel on holiday in this landscape. I was reminded of a comment by a well-travelled friend of mine that the outback can be monotonous, meaning ‘a lot of it’, but never boring. I get sleepy in continual traffic, but my soaring spirit on the open road is always alert!

Then there are the quaint towns along the way to keep you amused and alert. We stopped for fuel and photos in the little town of Wyandra (population 60) halfway between Cunnamulla and Charleville, Qld, which is attempting to set a unique world record – the world’s longest bra chain.

It’s a tough challenge because few of the travellers passing through Wyandra carry excess underwear, or are prepared to part with what little they have. But the good folk of Wyandra are unfazed, despite spirited competition from the less constricted citizens and holidaymakers of Byron Bay, who are also shedding their bras in earnest to break the current (New Zealand) world record of 170,000 bras stretching nearly 164km. Good luck, girls!

Then there’s the question of fires. While most of Far North Queensland seems to be permanently ablaze, both from indigenous habit and planned dry season back burns, lighting camp fires south of Townsville during the same period can be a crime in some areas. It’s all part of the rich tapestry of travel.

The shortest mapped route after Barcaldine is to travel north-north-west via a narrow but good sealed road to Aramac, then on to Torrens Creek where it meets the Flinders Highway at a T junction.

As the last 20km or so of this is a good but dusty unsealed road, some people might prefer the longer all-bitumen route via Longreach, which has the added travellers’ attractions of the Stockman’s Hall of Fame and Qantas Founders Outback Museum, and Winton, the birthplace of Qantas in 1929 and where AB ‘Banjo’ Patterson drew his inspiration for Waltzing Matilda.

The black-top alternative is to turn right at Barcaldine and head for Emerald, short-cutting the corner and heading up the bitumen to Charters Towers and then on to Townsville.

But if your caravan is well sealed, or you are comfortable with a film of dust on your doona, travel via Aramac to Torrens Creek, turn left and then bypass Hughenden to take the high road across the Tablelands on the Kennedy Highway before dropping down to the coast to Innisfail, or just north of Cairns via Mareeba. Or you can stay on the high road via Mt Molloy to access Port Douglas or Cooktown.

The downside here is that there is a 110km unsealed stretch (as I write) between Gregory Springs and the first fuel stop at the Oasis Roadhouse and, if there has been recent rain, this black soil country can be sticky. The upside is that you don’t have those interminable 50km town zones to stop-start your progress – the bane of every RV traveller – so you can make excellent time across the flat Tableland roads before entering civilisation at your point of preference.

Mr Google said this was the shortest route at 2881km from our Melbourne home to Port Douglas and it would take 37 hours.

Don’t make the mistake (as we once did) of taking the shortest mapped route from Aramac to Hughenden via Muttaburra. While the unmade road is in good condition, it’s 211km long and dusty and will take you longer than any of the alternatives.

Most caravanners don’t make that type of mistake and they wisely stick to the bitumen, travelling east via Charters Towers to Townsville after they reach the Flinders Highway and then crawl up to the coast to Cairns and Port Douglas. It can be painfully slow and boring after the free-spirited travelling on the inland routes, with its constant roadworks and long single-lane sections behind slow moving traffic. And correct me if I’m mistaken, but doesn’t Cairns have more roundabouts per capita than any other city on the planet?

As well as a shortage of 50km/h towns and 40km/h school zones, the other upsides of taking the inland route at least as far as Barcaldine is the relative scarcity of heavy trucks and B-doubles compared with the more popular highways closer to the east coast.

We also found an unexpected profusion of wildlife – herds of wild goats, flocks of emus and even a few mobs of brumbies. Ironically, there’s not a single sign to warn you of these nomadic animals on the route, whereas when you get up the coast in Queensland, the ratio of warning signs about cassowaries is overwhelmingly in the signwriter’s favour!

But the profusion of wildlife means you need to fit your safe travelling hours into the window between an hour or so after dawn and a similar period before dust. Drought conditions in central Queensland and the number of dead kangaroos beside the road, skittled as they came to graze on the juicy grass shoots created by the water spill-off, told its own story.

The downside of the inland route is the relative scarcity of fuel on some sections and you will need to have a safe range of 300km up your sleeve and be alert to long hops between refills on some sections. With embarrassment, we missed the ‘no fuel for 251km’ signpost on the outskirts of Hillston in northern New South Wales and, despite the Jeep’s excellent 14.5L/100km economy and its 93.5L tank, we realised by the Mt Hope pub that we were going to run out 50km short of the next diesel pump.

A very kindly fellow traveller towing a Jayco Discovery Outback happened to have a spare 20L of diesel and we refilled his container when we arrived in Cobar later that evening.

The same rule applies to the trek across the Tablelands from Hughenden. It pays to carry a full 20L jerry can all the time... just in case.

If you leave from Sydney, Google Maps says it will take you 30 hours – nearly as long – to cover 2466km to Port Douglas via the Blue Mountains, Dubbo, St. George, Emerald, Charters Towers and the Tablelands west of Cairns, but on bitumen all the way.

On these roads, our Jeep Grand Cherokee proved a very able and very comfortable tow tug for our 3200kg Ascot SX, with its 184kW/570Nm V6 turbodiesel having little trouble maintaining a true 95km/h cruising speed for most of the trip. This gait corresponded to around 1800rpm in top gear in the vehicle’s new eight-speed ZF automatic transmission – the ‘sweet spot’ in the engine’s torque band – and left plenty in reserve for overtaking slower caravans when required.

At this rate it was using around 16L/100km – actually less than we achieved with a current Nissan Navara V6 turbodiesel towing a much lighter 1850kg Track Trailer Topaz caravan a year earlier – and this improved into the 15L/100km bracket when we dropped out of the mountains to head up the coast.

As you travel the inland route you will also notice other subtle differences between the states that you might miss on the more trafficked highways. Regular road signs in Queensland advising you whether major highways are open or closed to traffic is a constant reminder that we live in a sunburnt country of droughts and flooding rains – many sudden and unpredictable.

Four days after leaving Melbourne, we arrived in Port Douglas, found our pre-booked site in the Pandanus Caravan Park, and splashed into the Coral Sea just a few hundred metres or so away. We felt like Queenslanders – southern Queenslanders, that is. Now it was time to do what Brian Wilson suggested: take it slow.

“You’ve come a long way,” said a local. I was genuinely surprised. Getting there fast, the time had flown.