“We went travelling and haven’t gone home,” Stacey Jenner said, explaining how she and husband Peter came to manage the Noosa Caravan Park in Queensland.

Home was Newcastle, a surfer’s hotspot three hours north of Sydney in New South Wales, when they hit the road to work in a Cairns caravan park. That was their entry into the caravan park industry. From there, they travelled to South Australia’s Roxby Downs, then Victoria’s Torquay and, finally, Queensland’s Sunshine Coast.

As managers, they oversee a small park of around 2ha, with 21 one and two-bedroom cabins, 117 caravan sites suitable for caravans of up 30ft, a gaming area, swimming pool, wading pool, television room, two internet kiosks, and sizable camp kitchen with stainless steel barbecues surrounded by modest, simple gardens. 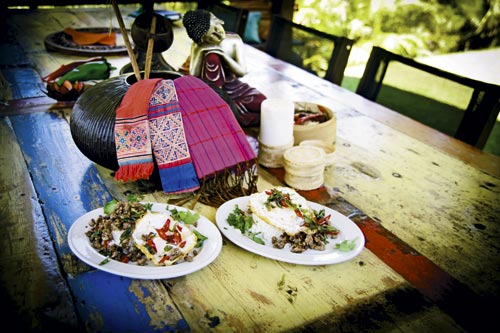 There was a time, Stacey explains, when the park was for permanent residents only. But it’s recently transformed into a tourist park and a member of the Top Tourist Parks group, offering travellers a base from which to explore Queensland’s Sunshine Coast.

Stacey’s suggestion to her visitors, no matter how long they stay, is to take the four-minute walk from the park down to the Noosa River Marina and jump on board the Noosa River Ferry at Tewantin. The ferry carries visitors along the downstream reaches of the river, all the way to the very fashionable Hastings at Noosa Heads. It takes in views of Noosaville, Noosa’s north shore, and Noosa Sound into the heart of Noosa Heads with it’s famous beaches, shopping, eateries and national park.

From the river, and for very little money, visitors get an entrée to what this part of the Sunny Coast has to offer. As the river winds along towards its mouth at Noosa Heads, boat hire outlets offer opportunities for canoeing, fishing, jet skiing and sailing or just puttering about on the water.

Once at Hastings Street in Noosa Heads, you get to experience a little retail therapy and any number of cafes and restaurants. However, if you stray a little off Hastings Street, along the boardwalk that meanders down from the National Park, you’ll find the Noosa Reef Hotel, which puts on a reasonably-priced lunch.

Along the foreshore from Hastings Street is Noosa main beach. But if you’re looking for something less crowded, about a 15-minute drive from Noosa Caravan Park is the first of the eastern beaches – Sunshine Beach. Sunshine Beach offers a beach break ideal for those re-kindling their youth with a long board or a more cantankerous short board. Its long white sandy shore is also a haven for those wanting to try a little paragliding.

When it comes to beaches, you can get sand in more places than between your toes at the unofficial nudist beach – Alexandria Bay – at the extreme end of Hastings Street, within the Noosa Heads National Park.

If, like me, that gritty, back to nature stuff isn’t for you, a short drive from the Noosa Caravan Park towards nearby Cooroy will land you at Lake MacDonald and the Noosa Botanic Gardens. It’s ideal for picnics, to while away an afternoon, reading your favourite book, sipping on your chosen bubbly on the grass by the lake near a Greco-Roman amphitheatre, or green-thumbs can admire the impressive garden.

These lakeside gardens are home to tortoises and 40 varieties of birds. If your gardening passion is sated but you’re still twitching for a little more birdwatching, the Jabiru Park Wetlands, beside the Cooroy-Noosa Road forming the tail of Lake MacDonald, is one of the links in the Noosa bird trail.

South-west of the caravan park, intrepid travellers will find the road to the neighbouring village of Eumundi. This is a quaint coastal hamlet, worth visiting for a quiet coffee at any one of several worthwhile cafes or checking out one of the interesting little stores like the Hemp Hut gift shop – don’t let the name worry you. It sells hemp yarn, twine and jewellery.

Drop into Eumundi bright and early on a Wednesday or Saturday morning and you’re in for quite a treat at the markets. They have an eye-boggling array of fresh produce, multicultural foods, jewellery, pottery, clothing, woodwork, ornaments, ointments and elixirs.

But there is more to do in Eumundi than just visit the markets. Chat to locals at the historic Imperial Hotel, or visit the historical museum and discover the origins of this charming town.

Travelling foodies will love the markets, as well as Travel and Gourmet Passion where Ursula, German gourmet chef, runs a Thai cooking school. She runs her school with a warm smile; her inspirational garden is worth visiting in itself.

A little further afield is the Ginger Factory at Yandina – an absolute treat for families. Don’t worry, though, this isn’t a tourist trap for families or well-intentioned grandparents. For those just looking for a beaut coffee in a resort-style setting, it’s free to enter. If you bring the kids, a revamped sugar cane train allows you to tour the world’s biggest ginger factory and learn some of the secrets behind Australian ginger.

There are also magnificent gardens or, for the really young or young at heart, a boat ride chases the gingerbread man all around the world.

Head back towards the coast and that little bit closer to Brisbane and you’ll come across Mooloolaba.

Whether you drive out to the Mooloolaba fisheries or walk through the parklands that follow the river to the mouth, the Mooloolaba Esplanade is a popular route to some great cafes, restaurants and eateries that sell some of the freshest seafood on the Sunshine Coast.

Another Sunshine coast adventure is a boat ride along the Maroochy River. It’s an aquatic adventure through another part of the Sunny Coast, similar to the one that starts at Noosa Caravan Park.

FROM ACROSS THE DITCH

They’d been touring around Australia for six years when Caravan World caught up with a couple of Kiwi work-as-you-go tourists on Queensland’s Sunshine Coast.

Helen and Ross Douglas from the New Zealand’s North Island came over initially to see the NRL finals in Sydney and have stayed ever since.

Ross said that their wanderlust was easy to explain. “There’s a big world out there to see.”

Since arriving in Oz, the couple have made the most of their time travelling from the Whitsunday Islands, Qld, to the Great Ocean Road and many points in between. Yet they still feel there’s so much more to explore.

“We thought we’d done a lot of travelling,” Helen said, “until we looked at the map and saw there was so much more to see.”

Next, they are hoping to point their Nissan Patrol and 23ft self-contained Retreat caravans towards Perth.

Ask them what their favourite Australian destination was so far and Ross smiles and explains: “We missed the experience of the four seasons that we’d lived with in NZ, so we went to Melbourne to experience them again,” he said. “That lasted about two months before we took off back to Hayman Island in the Whitsunday Islands.”

Ask them if they’d ever put aside caravanning for a sedentary life and Ross answers: “We work to live and not the other way around.”

He leans out the window of his tow vehicle and nods his head towards the caravan he’s hauling into his campsite, saying, “The other half is coming tomorrow.” He’s not talking about his wife Pamela – she's sitting beside him, laughing at his joke. The joke is simple when you see his caravan – less than 15ft from towball to rear door.

It’s a homemade box on wheels called Lil Tripper – not much bigger than the slide-outs often seen on large luxury vans and motorhomes.

From Caboolture on Brisbane’s north side, Maurice and Pamela had dropped into Noosa on their way back from Bundaberg.

Lil Tripper is their third caravan and their initial van prompted their desire to travel around Australia.

They were living in South Australia at the time and the idea of doing the Big Lap enticed them to sell their house and buy a van. With the house sold, they held one last garage sale before heading off. It rained. During the sale, Maurice was tying up the dog and his wrestle with their wet dog ended when Maurice broke his ankle. They ended up in the local caravan park for the next six months.

The Windsor caravan they then bought carried them to Queensland’s Glass House Mountains. That was a decade ago.

“Time moves on. We’d been living in houses and had always talked about travelling again. The second attempt ended with Maurice getting a hernia,” she said.

They again abandoned their plans and were just starting to think about travelling again when a series of floods, beginning in December 2010, hit Queensland and forced the evacuation of thousands of people from towns and cities across the state.

Now retired, the couple knew they couldn’t afford to replace their small commercial van with a large 4WD tow vehicle. That meant they needed a small caravan in which to travel.

While selling some bric-a-brac at a market, as is their pastime, another stallholder told them of a marine plywood homemade caravan that weighed in at only 700kg. With a new axle, air vent and gas cylinders, they were ready to hit the road.

They soon found that the little van was so small it required them to coordinate their movements, with each deciding when they’d get up.

“If you get out of bed at the same time, you’re going nowhere,” Pamela said.

When it comes to sitting on her bed to answer her emails, Pamela had to discover her inner contortionist. Sometimes, she says, she gets too many emails and has to take a break from answering them, because sitting in her contorted shape has given her such bad cramps.

Beyond its light weight and small size, the van has two beds, a little cooker and a fridge. They added a microwave and were ready to travel.

Pamela wants to truly make the little caravan theirs by changing its name to For Me and My Girl, which hints at the couples’ background. Their true passion is as entertainers, running their own entertainment business.

Pamela explains: “I’ve been in the theatre for many moons. I’ve had my own rock bands and blues bands in England. I’m a composer turning classic novels into musicals.”

And Maurice is no slouch, singing-wise. He even sang on the HMAS Canberra when he first came to Australia many years ago. As for Pamela, her varied career included operating the royal telephone at Buckingham Palace while Maurice worked as a Beef Eater.

The theatrical duo met at a dance in England 25 years ago and haven’t looked back since. Pamela says that between them, they have “lived a colourful life”. At 82 Maurice, reckons “there’s a bit more to come yet”.