NOW THAT THE ROAD in from Mareeba is sealed, Cooktown has become one of the more popular Qld destinations for RVers to escape the southern winter.

When Denyse and I first started travelling to Cooktown from Cairns in 1973 the road was dirt for about 240km. It was very corrugated, with pot holes, bull dust and three creeks. If it rained while we were in Cooktown, we had to wait until the creeks went down.

The drive was a lot more interesting, to say the least, back in those days.

Driving along the Mulligan Highway (Highway 81), there is a large lake about 30km from Mareeba, which Cairns property developer George Quaid created for a huge subdivision. He also constructed a new road down to Cairns, which can still be seen opposite the lake. However, due to the controversial nature of the development he was unable to obtain the necessary approvals, so the road was never officially opened and the development didn’t proceed.

The country here is a dry, open tropical savannah with lots of huge termite mounds. The first small town you come to is Mt Molloy, which was named in the 1880s after copper was discovered. There are plenty of old relics left to explore, and the historical post office and hotel, built in 1903, are worth a visit. Fuel and limited supplies are available.

You will find a great overnight stop 1km on from Mt Molloy. Rifle Creek Rest Area has cold showers, toilets, water, fireplaces, a shelter shed and room for big rigs.

This area is cared for by the local council and a gold coin donation is required. There is a 48-hour limit and it is patrolled each day.

After a good night’s rest, it is a further 29km to Mt Carbine, where large deposits of wolfram were discovered in 1890 and mined until the ’80s. You will see the mine on the right as you pass. There is a roadhouse and a pub, as well as a caravan park known for its prolific birdlife.

From Mt Carbine, you will drive through dry eucalypt forest and cattle country, and there are two ranges to cross. The first is the Desailly Range, 30km from Mt Carbine. This is not a long haul, but it is quite steep, so select a lower gear before the climb.

At the top you can pull off at Bob’s Lookout for a view over the surrounding countryside. The hills opposite come alive with waterfalls after rain.

After you wind down Desailly Range, it’s 45km to the Palmer River Roadhouse. This area is rich in local history, with the 1872 discovery of gold leading to Qld’s largest gold rush. By 1875 there were an estimated 15,000 miners on the Palmer, with the population peaking at 17,000 in 1877.

Gold is still found here today, and when we stopped at the roadhouse we were told of a young fellow who had found several nuggets along the river bank the previous week, using a basic metal detector. You will need a permit and the property owner’s permission before you start looking for your fortune.

The Palmer River Roadhouse was one of our refreshment stops on our trips up during the ’70s. After travelling up the Kuranda and Desailly ranges on a steep, corrugated dirt road, usually in the dark, we were often in need of a drink. Be sure to talk to owner Cheryl Fitzgerald, who has lived in the area for 17 years and is passionate about its history.

The Palmer River Roadhouse has a small caravan park, as well as fuel, food and a museum. There is also a 4WD track through to the historic Maytown Goldfields, where there are relics of those hard gold mining days.

The Byerstown Range is next, but this is an easy climb with a wonderful lookout over the road. There are toilets and caravan parking at the James Earl Lookout, and some very interesting information boards.

Lakeland Downs, which lies 185km from Mareeba, was a huge grain property in the ’60s. The area has rich soil formed by volcanic activity, and is very productive. Coffee and bananas are the major crops these days.

Lakeland has a modern roadhouse which serves meals. There is also a second fuel outlet that serves great local coffee, meals, and sells coffee beans and souvenirs. There is also a caravan park and a hotel/motel.

From Lakeland, it is only another 82km to Cooktown. This is cattle country with no fences so keep your eyes peeled; we saw quite a few on the road during this trip.

The next point of interest is the Little Annan River Gorge, 28km from Cooktown. It comes up fairly quickly, and the only place to stop is a rest area on the right. Here you will find a series of good swimming holes, with the gorge on the opposite side of the road. The gorge is a great area to explore; the river drops down a waterfall, then through a small opening in the rocks. But given there is not a lot of room for vans, it may pay to return here on a day trip from Cooktown with just your tow vehicle.

Further on you will see Black Mountain. There is a good stopping area and viewing point on the right. The rocks are covered in dark blue/green algae, and there are many stories of people and animals disappearing here. This area has something of a sinister feel to it.

Archer Point is next, where you will find a great spot for scenery (there is a terrific view from the lighthouse) and fishing. You can still see the remains of the old jetty, which is a favourite fishing spot for Denyse and I. Road conditions are very variable, so it pays to check before taking a van down here.

Despite the influx of people since the road in was sealed, Cooktown feels the same as ever. It’s a beautiful Far North Qld town with lots to offer travellers. And all with that unmistakable laid-back Qld vibe. 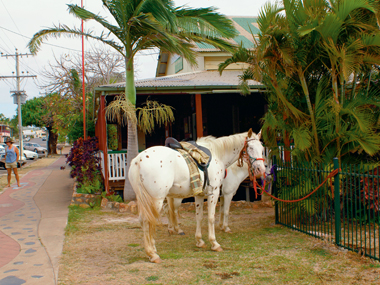 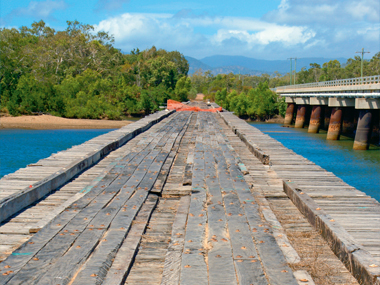 The trip from Mareeba to Cooktown is around 270km via the Mulligan Highway. The road is now sealed and has a 110km/h speed limit in places.

The easiest route to tow a caravan up to the Atherton Tableland is the Palmerston Highway, leading up from Innisfail.

The scenic route back is down the Rex Range from Mt Molloy to Mossman, detouring north to Daintree, then back through Port Douglas to Cairns.