DRIVING THROUGH THE seemingly never-ending canefields south of Ingham, Qld, I started to wonder if there really would be unspoiled forest and creeks waiting for us at the end of the trip. Then, all of a sudden, the open landscape was replaced by tall, luscious rainforest and we came to the first concrete causeway.

It was like driving into a different world. The intense sunlight that almost blinded us along the Bruce Highway was now filtered through a dark canopy of tropical rainforest. The spectacular Ulysses butterflies would appear here and there, mesmerising the three kids with their bright blue colours. When we reached the second causeway we marvelled at the clear waters of Waterview Creek.

We reached the Jourama Falls campground and found the perfect spot for our rig. This large area has plenty of space for caravans and the kids have lots of room to play. It didn’t take long for the goannas to come and check out our stuff, and there were bush turkeys galore.

Fortunately, we happened to arrive on a beautiful day so we lapped up the sun and enjoyed the warmth. But be sure to take one warning to heart: camping in the rainforest can mean you sit in drizzle or rain for a couple of days (that’s why they call it a rainforest, after all).

Once you’re set up, venture out to the walking track that takes you to the falls. The track can be a challenge because, depending on how much water is in Waterfall Creek, it can involve some rock-hopping.

You have the choice of taking the 600m walk up to the lookout, where you get views of the falls and surrounding forest, or you can follow the creek upstream. Either way, you will get a real tropical rainforest experience.

If you’re feeling game, you can also go for a swim in one of the rockpools, where you might spot a freshwater turtle. These relaxed-looking creatures sun themselves on the rocks and logs, quickly retreating into the water at the first hint of danger.

Up at the lookout you can marvel at the Jourama Falls, a series of cascades disappearing into deep pools, zig-zagging their way down the rocky slope. You can’t see the higher slopes of the Seaview Range from the lookout, so the falls appear to come from nowhere.

Water flows here most of the year due to the misty rain in the tropical mountains, which is why the Jourama Falls are considered the southern gateway to the Wet Tropics World Heritage Area.

From the campground you can take a memorable day trip to Lake Paluma, which is situated high up in the mountains, with Mt Spec rising 1000m above sea level.

You first need to head back to the Bruce Highway and travel towards Townsville for about 18km until you hit the turn-off to Paluma. This is where the adventure starts, with the steep, narrow road snaking up and around the mountain. It’s not advisable to tow a van up here.
On the way, it’s worth stopping at Little Crystal Creek, which flows all-year-round and is a popular swimming hole for Ingham and Townsville residents, not to mention travellers, who want to escape the stifling summer heat.

The stone arch bridge over Little Crystal Creek is considered something of a local historic wonder. Built during the Great Depression of the 1930s, it took two years to complete, using unemployment relief labour. Employment lasted six-weeks for single men, 10-weeks if they were married, and all were paid two bob per day, with two men per tent.

After you cross the bridge it’s an 11km drive to the township of Paluma. Once known as Cloudy Clearing, Paluma developed after the discovery of tin in 1875. The town is thought to be named after HMQS Paluma, a converted gunboat purchased by the state of Qld to meet a perceived Russian threat to the colony.

The town was gazetted in 1934, but development came to a halt with the start of WWII when, given its location 1000m above sea level and overlooking the Coral Sea, Paluma’s strategic location was quickly recognised. The township was then taken over by defence forces, first by the Americans and then the Royal Australian Air Force (RAAF).

American officers worked with Australian defence and scientific personnel on a portable lightweight air warning device that was field-tested around Paluma for the jungles of New Guinea.

The Australian army undertook its first-ever jungle training in the forests around the town, and RAAF personnel manned the No. 6 Medical Rehabilitation Unit in Paluma, treating close to 1000 patients over two years.

Today, this peaceful town is made up mostly of holiday houses. There are no shops and you can’t buy fuel. The pottery is an interesting place to visit and a handful of licensed restaurants and a cafes are open for meals during the dry season.

The history of the area has been captured in a series of signs, located throughout the village at sites of historical significance.

For the energetic, there are a couple of walks to choose from. McClelland’s Lookout is named after the Main Roads Commission overseer in charge of building the Mt Spec Road and stone bridge in the ’30s. On a clear day, the lookout has views to the coast.

The Paluma Rainforest Walk takes you through dense rainforest, with strangler figs, king ferns and glowing fungi at night. 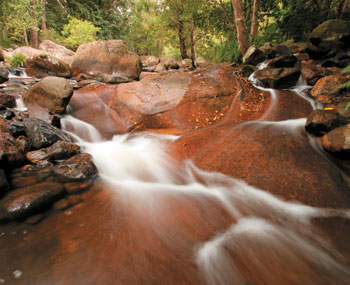 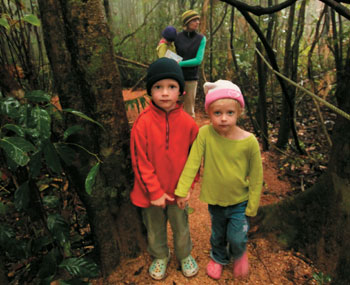 Leaving the township, it’s 3km to the turn-off to the lake, where the road turns to dirt. The last 11km take you through dense rainforest and past the turn-off to Birthday Creek Falls.

Take care on this road because it’s usually wet and there are plenty of potholes to make for a bumpy ride.

The year-round Birthday Creek Falls are definitely worth a look. You may even spot the elusive golden bowerbird on the walk in. Wherever you look, everything in this area is a dazzling emerald colour and it is amazing to see the many different shades of green there are. Paluma is also a birdwatcher’s paradise, with some of the region’s most endangered species found here.

It’s a short drive from Birthday Creek Falls to Lake Paluma, where you can camp (no caravans allowed) or just spend the afternoon and have a barbecue lunch.

The lake is one of the water supplies for the city of Townsville. By the 1920s, a thriving Townsville had outgrown its water supply. The city taps ran brown and dirty and water rationing was common in the dry season. The cool, clear waters of Crystal Creek soon became a tempting alternative. In 1955, the Townsville City Council completed a pipeline to carry Crystal Creek water to the city reservoirs.

Construction of Lake Paluma began in 1957, but contractors were caught out by heavy rain during the following year, when the dam was filled before it could be fully cleared. Today, the lake is a great place for swimming and provides relief from the extreme summer heat.

With a bit of luck you might see Lake Paluma in the sunshine, but you’re more likely to spend the afternoon in the clouds, as we did. This is an experience to be had at least once in a lifetime and you’ll be especially grateful when you drive back out into the sunshine.

Camping is available at Jourama Falls campground, but sites must be pre-booked. Fees are $5.15 per person, per night, or $20.60 per family. Facilities include toilets, cold showers and taps. Dogs and generators are not permitted. Call 13 74 68 or visit www.derm.qld.gov.au/parks/jourama-falls-paluma/camping.html

The road to Jourama Falls is sealed except for the last 4.5km. It’s suitable for standard vehicles and caravans, but take care when crossing the two causeways, especially after heavy rain.

For information on road conditions to Lake Paluma call the Townsville City Council on (07) 4727 9000.