I HAD HIGH expectations of the Undara lava tubes, and these volcanic caves snaking under the flat, rugged plains of the Gulf Savannah didn’t disappoint. My wife and I visited the Undara Experience Lava Lodge during November, months after the peak season, and shared it with just a busload of travellers and couples of similar age. The tour groups were personal and the resort – set in the Undara Volcanic NP – was filled well below capacity. The nearest thing to a crowd was at the resort pool where everyone gravitated in the heat of the afternoon.

THE LAVA TUBES
No matter how much you’ve read about this subterranean marvel, you can’t beat standing in the massive caverns and staring into the blackness of the disappearing tubes, imagining the scene 190,000 years ago.That’s when a major volcanic eruption in the region spewed 23 cubic kilometres of lava across 1550 sq km of countryside. Scientists believe that at the height of the eruption the volcano was expelling 1000 cubic metres of molten rock per second at temperatures of around 1200°C.

The tubes formed where the lava had filled meandering watercourses. The top layer cooled, forming a crust above, but left an underground river of lava. When the eruption ceased, the molten rock drained away, leaving a 100km-long pipeline. In time, sections of the roof collapsed, resulting in the line of depressions and exposed caves we see today. 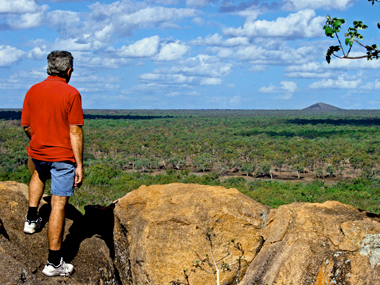 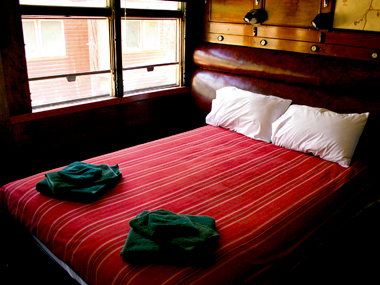 More than 300 roof collapses have led to the identification of 68 separate sections of lava tube, the largest measuring more than 21m wide and 10m high. The tubes are dry for most of the year, but our guide assured us they can fill with water during the wet season.

The only way to see the lava tubes is with a trained guide.The Undara Experience offers many tours of varying lengths. We joined the two-hour Archway Explorer, and saw three sections of lava tube and the surrounding countryside. This tour is along good tracks, boardwalks and steps,and requires only a low level of fitness. Another tour is available for travellers with limited mobility. Longer tours of up to eight hours will take you through more sections of the lava tubes.

Whichever tour you choose, you’ll need closed-in footwear, a hat and a water bottle. Keen photographers should take a tripod, cable release and a torch to successfully capture these spectacular, dimly lit caves.

The collapsed roofs provide access to the tubes via boardwalks leading downwards, with platforms at specific locations. The climate in the depressions and tubes is cool and humid compared to the savannah woodlands above, providing a welcome refuge for wildlife and pockets of remnant rainforest vegetation. The tubes appear lifeless but many are home to colonies of bats, with one cave having a population of more than 40,000. Prior bookings are essential for tours.

GETTING THERE
Undara Experience is about 300km south-west of Cairns and about 420km north-west of Townsville via sealed roads. If you’re travelling from Cairns with a caravan in tow, the Palmerston Highway, beginning near Innisfail, is the easiest way to reach the caves. The Kennedy Highway via the Kuranda Range is the next best option while the Gillies Highway is steep and winding and best avoided when towing. From Townsville, the best all-sealed access to Undara is via the Herveys Range, Gregory, Kennedy and Gulf developmental roads.

Sections of the Cairns and Townsville access roads are single-lane bitumen and are used by roadtrains, which can be up to 50m long. Slow down and move well off the road when encountering these monsters and think twice before attempting to overtake. Other hazards are livestock (sections of the highways are unfenced), wildlife and road works.

Undara Experience offers one- to three-day packages which include air, rail or coach transfers from Cairns and accommodation, meals and tours at Undara.

The caravan park is basic, with 29 powered sites (22 are drive-through) and an amenities block. Each site has a campfire pit or barbecue, and firewood can be purchased from reception. Collecting wood from the bush is not allowed.

Swags Tent Village consists of permanent, off-the-ground tents with bunks, cooler boxes and electric lights. Most tents have an adjoining undercover kitchenette with a gas barbecue, fridge, picnic tables and chairs. Linen is available at an extra cost.

We spent a night in the restored railway carriages. These turn-of-the-century carriages were saved from a fiery fate in the late 1980s ,relocated to Undara and refurbished as multi-cabin accommodation. Our cabin had a basic ensuite, no fridge or air-conditioning with just enough room for a double bed and an original red leather railway seat; the cabins aren’t luxury accommodation, but they do have charm. Other original features include the overhead luggage rack and a fold-out washbasin.

Most carriages share a curved roof with a communal deck, where you can enjoy the sights and sounds and nocturnal visitors from the surrounding bush as you sip on a cold drink.

DINING AND FACILITIES
Undara Central is a huge sheltered area with a bar/bistro and restaurant, which carries on the railway theme. The Saloon Bar and a part of the restaurant are in the old railway carriages. A pool table and other activities are also here. The resort hosts campfires with bush poetry and good old-fashioned sing-a-longs.

A bush breakfast is served at the Ringers Camp, a short stroll from Undara Central. Take care, though, as kookaburras and butcher birds regularly launch raids from the surrounding branches on unattended breakfast plates.

The Undara Experience meets most basic needs of the traveller. ULP and diesel are available but are costly, so fill up at Mount Surprise or Mount Garnet if you can.

There is a pool and laundry and a shop at reception, which sells some groceries, drinks, snacks, souvenirs, ice, firewood and gas refills .I suggest stocking the van before heading for Undara.

Mobile phone coverage is limited, but there are two phones located behind reception. Phone cards are required and these can be purchased at reception or the Saloon Bar.

Water at the resort is drawn from a natural aquifer and passes through a filtration unit, purifier and settling tanks, but it is not treated with chlorine or fluoride. I had no problems with it but if you are concerned, fill your van tank or purchase water bottles before heading for Undara. Bottled water can be purchased at reception and the bar.

BUSH WALKS
The Undara Volcanic National Park is well worth exploring by foot. There are seven bushwalks to choose from, varying from the Bluff Walk at just 1.5km, 25 minutes return, to the moderate Rosella Plains Lookout Track, which covers 12km and takes six hours. A map and information sheet on the walks are available at reception and different coloured markers identify the different tracks. You’ll need comfortable walking shoes, water and a hat and it’s essential that you sign out at reception before leaving and sign in on your return.

We did the Bluff Walk, but I hear that the Kalkani Crater Rim Walk, which goes to the top and around the rim of a volcanic crater, is spectacular.

HEEDING THE CALL
I plan to return to Undara, perhaps in the early winter when the temperature is more comfortable and the landscape not as dry. Next time,I’ll extend my stay, take a longer tour and a couple of bush walks and simply enjoy the relaxing atmosphere of the bush.

Around 20,000 people visit Undara each year, so expect it to be busy during the peak season. The caravan park at Undara is small, so book ahead if you want a powered site in the busy season.