The Northern Territory is blessed with many natural wonders and geological marvels, but few of them match Kings Canyon for sheer jaw-dropping splendour. The canyon is the central feature and prime attraction of the Watarrka National Park (NP), 330km south-west of Alice Springs, cleaving a buttressed outlier of the rugged George Gill Range in a massive gorge bounded by sheer cliffs up to 300m high.

On either side of the canyon, the plateau has been sculpted by the elements into a maze of beehive domes of burnished red sandstone, interspersed with rock hollows, and carved by gorges whose cool, shady depths nurture lush vegetation along chains of perennial waterholes. It is one of the most varied and starkly beautiful landscapes in central Australia.

The record of human occupation is a ‘blink of the eye’ by comparison but impressive all the same. The Luritja Aboriginal people have lived in the region for more than 20,000 years and still constitute the third largest Indigenous population in central Australia. The name ‘luritja’ is thought to derive from the Arrernte word lurinya, meaning ‘foreigner’, applied to people who relocated from remote Western Desert areas on to Arrernte lands closer to Alice Springs. For them, Kings Canyon was an oasis in a harsh environment, providing refuge from the hostile elements among the waterholes and shady gorges, and abundant food in the plants and animals that lived there. Their occupation is attested by engravings within the canyon and rock art sites along the southern escarpment of the range. 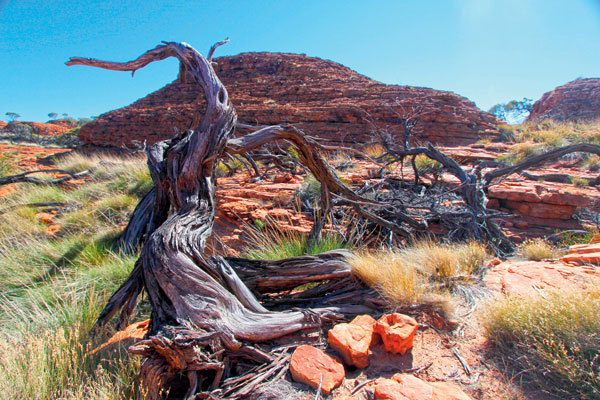 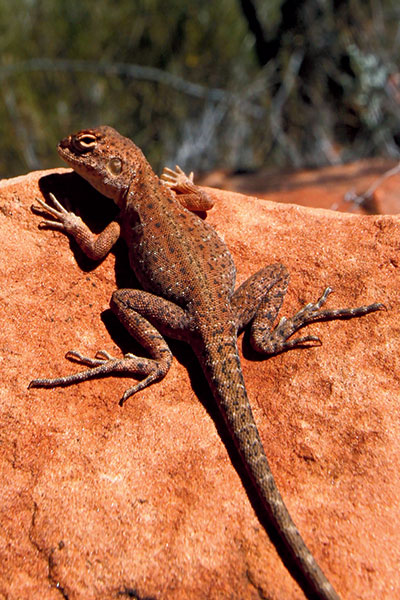 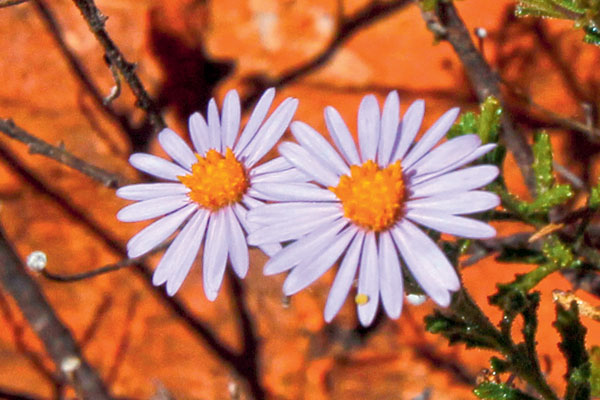 The national park is named after the umbrella bush (Acacia ligulata), known to the Luritja people as watarrka, which proliferates across the range and surrounding plains. This and more than 750 other plant species have been recorded in the park, ranging from desert oak, spinifex and acacias on the exposed plateau to 60 or so rare riverine plant communities along the waterholes deep within the canyon. These include the endemic creeping swamp fern and a species of cycad (Macrozamia macdonnellii) that are relics of the rainforest that covered the area 50 million years ago. This diverse vegetation fosters a wealth of wildlife, including more than 100 species of birds.

STATIONS OF THE PAST

Explorers Ernest Giles and Samuel Carmichael were the first Europeans to traverse the region in October 1872. They found desperately needed water within the canyon and Giles named the creek after an old friend, Fiedler King; the range he named after his brother-in-law, George Gill, who helped fund the expedition. Giles was followed a year later by William Gosse, who camped along Kings Creek before heading south to ‘discover’ Ayers Rock, which he named after the governor of South Australia, Sir Henry Ayers.

In the late 1880s, Tempe Downs cattle station was established on land east of the canyon. However, a run of bad seasons decimated the grazing land and dried up the creeks, forcing the owners to move 2500 head of cattle west to Reedy Rockhole and Kathleen Springs. This brought the pastoralists into conflict with the Luritja people, a number of whom were arrested by police for spearing cattle in defence of their traditional waterholes. In 1983, Tempe Downs surrendered more than 1000sq km of land for the establishment of the national park, which was formally declared in 1989.

Jack and Elsie Cotterill set up the first tourism venture in the area in 1960 when they built a tourist lodge called Wallara Ranch at Yowa Bore, 100km east of the canyon. In 1980, Ian and Lyn Conway took up 3200sq km of Crown Land to establish Kings Creek Station, adjoining what is now the national park, on which they created a successful cattle enterprise and tourist haven offering a station stay experience for travellers. They also founded a charitable trust called Conway’s Kids to provide educational opportunities for Indigenous students from remote central Australian communities.

For modern-day visitors, bushwalking is the main activity in the park and several well-marked walking trails, of differing lengths and degrees of difficulty, provide ample opportunity to explore this unforgiving, yet unforgettable, environment.

A good introduction is the Kings Creek Walk, an easy 2.6km (return) stroll that meanders along the canyon floor, through groves of coolabahs and red gums, with many interpretive signs that explain the geology, vegetation and birdlife. The trail ends at a viewing platform affording stunning views of the towering sandstone walls that enclose the canyon. Beyond this point is a traditional ceremony place that is sacred to the Luritja people and only men fully initiated into their culture may go there.

A much longer and, in parts, strenuous, but very rewarding excursion is the Kings Canyon Rim Walk, rated by many as one of the best in central Australia for its diversity and spectacular views. This 6km loop begins with a steep, 500-step climb of more than 100m to the plateau above the canyon. As the trail can only be followed in a clockwise direction, there’s no avoiding this ascent but it can be interrupted part of the way at a lookout with an impressive view down Kings Creek Valley and along the buttressed escarpment of the George Gill Range.

Once on the plateau, the trail is fairly easy, following the gorge’s northern rim across tiers of weathered sandstone clad in a smattering of spinifex, white cypress and ghost gums. Several vantage points reveal spectacular views along the canyon and across to the opposite wall. Near the top of the canyon, the track undulates through the Lost City, a maze of domed ‘beehive’ formations, and a 600m detour follows a projecting spur to Cotterill’s Lookout with vertiginous views into the canyon.

About halfway around the loop, the trail descends a wooden staircase into the delightfully lush Garden of Eden, a narrow gorge lined with ferns and prehistoric cycads, terminating at a large permanent pool embraced by an amphitheatre of vivid orange-red sandstone. This shady grotto is the perfect spot to take a break, cool off and enjoy the quiet ambience of this secluded oasis.

Another staircase climbs out of the gorge as the trail continues around the canyon’s southern rim on the return leg. Many consider this part of the loop the most scenic, as it meanders through another swarm of weathered domes, narrow gaps and rugged valleys, emerging at strategic lookouts over the sheer-sided canyon and the rugged George Gill Range at Kestrel Falls.

So hostile is this arid environment that national park authorities restrict access to the Kings Canyon Rim Walk during periods of hot weather. On days when the forecast maximum is 36°C or higher, which is often the case, the Rim Walk is closed after 9am. Even when the temperatures are not so high, there is very little shade on the walk and visitors should be wary of dehydration. It is best to start the walk early in the day and be well prepared with lots of water, a hat, sturdy shoes, sunscreen and snacks. And although you’re likely to encounter many other walkers on the track, this is remote country and emergency radios have been installed along the trail and at the car park, as well as first aid boxes at the top of the canyon.

Two other walks reveal different aspects of this diverse national park. The Kathleen Springs Walk (2.6km return) is an easy stroll through open terrain to a permanent, spring-fed waterhole at the head of Kathleen Gorge, with interpretative signs about local Aboriginal culture and physical remnants of early settlement and recent cattle industry. For the more adventurous, the 22km (one-way) Giles Track offers a two-day walk connecting the Rim Walk and Kathleen Springs across the top of the range. This one is for experienced bushwalkers only and requires careful planning and preparation.

The national park and surrounding region may also be explored via a range of guided activities and scenic helicopter flights out of Kings Canyon Resort, as well as quad bike safaris and camel rides on Kings Creek Station.

Regrettably, there is no accommodation within the park and camping is not permitted. However, a couple of commercial venues close to the park entrance provide a range of options to suit all budgets. These include a camping area at Kings Canyon Resort with powered sites for caravans and unpowered tent sites, bunkhouse accommodation and hotel rooms. Kings Creek Station also has a campground and accommodation in safari-style cabins with shared facilities. Australia Pacific Touring also maintains ‘glamping’ facilities nearby at the Kings Canyon Wilderness Lodge, mostly for their touring clients but also accessible to self-drive travellers who book ahead.

Make no mistake – Kings Canyon is way off the beaten track in a harsh desert environment that can get infernally hot, especially in summer. This combination hardly makes for anyone’s idea of the perfect outback destination, but it should, and does, for many thousands of adventurers who visit this iconic landmark every year, make for an unforgettable experience in the Territory’s Red Centre.

It can also be reached by 2WD vehicle via the Stuart Highway, Lasseter Highway and Luritja Road, all fully sealed (460km).