There is more to Kakadu than waterfalls and wetlands, bush walks and billabongs. Rock art plays an important role in the significance of the national park. It provides visible and intriguing links to the culture and history of the land’s traditional owners, reminding us of a different way of life, one that existed for thousands of years before European settlement.

There are numerous places throughout the park where visitors can admire Aboriginal rock art, but the three main locations are Ubirr, Nourlangie and Nanguluwur. 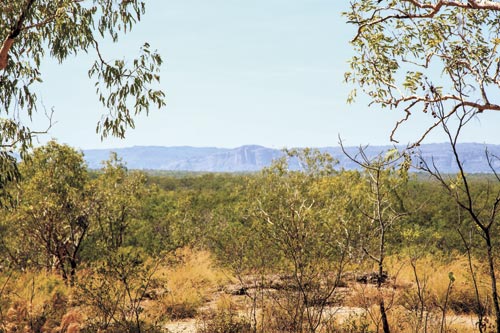 Ubirr is in the East Alligator region of Kakadu. Simply follow the signs to the carpark and take the well-marked trail around the various galleries.

For about 20,000 years, the many natural rock shelters made good camping areas for Aboriginal people. Food was plentiful; in fact, it’s a reoccurring theme in the Ubirr rock art, particularly in the main gallery, a huge rock overhang.

You’ll find barramundi, goannas, turtles and more depicted in the x-ray style which is so stunningly used in this region. Much of this art is thought to be less than 1500 years old.

As with most, if not all, of Kakadu’s rock art, each frieze in Ubirr tells a story, often with a moral or life lesson attached. Like the one about the Rainbow Serpent, known in these parts as Garranga’rreli, found in the aptly named Rainbow Serpent Gallery, where she is said to have painted her own image as a reminder that she passed through. Her visit, according to the Dreaming, was part of a longer ‘creation path’ that linked Ubirr with the East Alligator River, Manngarre and some parts of Arnhem Land. Tales of Garranga’rreli were told to Aboriginal girls as they grew into adults.

The tale of Mabuyu is equally fascinating. Mabuyu, a fisherman, is depicted as a warning against stealing. As he dragged his catch home, a ‘greedy person’ cut the string and made off with Mabuyu’s fish. Seeking retribution, Mabuyu waited as the thief ate the fish and set up camp inside a cave near the East Alligator River. Mabuyu then blocked everybody inside with a huge rock. They never came out, so the story goes. The entire Ubirr art site can be explored in less than an hour but allow at least two to give yourself enough time to reflect on each work. Why not time your visit to coincide with sunset over the Nadab floodplain (see page 52)?

Nourlangie Rock, as it’s commonly known, was traditionally owned by the Warramal clan which has since died out. Traditional owners from surrounding areas have assumed responsibility for this important region near the Arnhem Land escarpment.

‘Nourlangie’ is actually an anglicised version of Nawurlandja, the name of a larger area to the west, so the caretakers, the Mirarr, Murrumburr and Djok clans, ask visitors to refer to Nourlangie by its ‘proper’ names, Burrunggui and Anbangbang. Burrunggui is the name given to the top of the rock, Anbangbang to the lower section.

The galleries include the Anbangbang Rock Shelter and the Anbangbang Gallery (the main gallery). An archaeological dig in the rock shelter about 30 years ago revealed it had been used as a ‘base camp’ during the wet and early dry seasons for at least 20,000 years.

The artwork in the Anbangbang Gallery is particularly fascinating, though not all of it is open to the public – some is too sacred to be viewed by tourists. Nor is the full story behind each piece of art given since non-Aboriginal people are not always entitled to the complete tale.

One frieze depicts the creation ancestor Namarrgon, also known as the Lightning Man, and his wife, Barrginj, in among an image of Namarndjolg who, with his sister, broke traditional laws against incest on the rocky ledge above. (In Aboriginal culture, incest doesn’t necessarily refer to members of the same family – it extends to members of the same community with the same cultural responsibilities and relationships.)

The art trail around Nourlangie Rock is well defined and not too strenuous, though it’s quite steep in places. It’s a 1.5km circular walking track from the carpark that takes about an hour. The detour to the top of the Gunwarrdehwarrde Lookout is well worth the effort. It provides a sweeping view of the Arnhem Land escarpment and on a clear day, you’ll see three tall pillars seemingly carved out of its edge. This is said to be the home of the Lightning Man – a sacred and dangerous place.

A few kilometres before Nourlangie Rock, you’ll find a gravel road leading to the Nanguluwur carpark. Whether you make the trip will depend on your enthusiasm for rock art – this site is difficult to access as it’s a 1.7km one-way walk across beaten-track terrain. Furthermore, the gallery itself is quite small, limited to one boardwalk alongside the face of an escarpment.

There are numerous pieces of art to ponder, though, including a sailing ship with trailing dinghy. It’s a reminder of the changes that occurred after Aboriginal people had contact with Europeans settlers. Ships such as the one depicted frequented Kakadu’s Alligator rivers, ferrying supplies to buffalo hunters between 1880 and 1950.

Whichever art site you visit, consider taking a guided tour. The commercial operators are very knowledgeable about the culture of Aboriginal people as well as their spiritual ties to the land. It will only serve to deepen your appreciation of the art, its meaning, and the surrounding country.