I had my first taste of the Arnhem Highway at the unlikely hour of 5am on a Monday morning. The UV filter on the lens of my camera shattered the day before when I slipped on a rock in Jim Jim. It could have been a lot worse but, unfortunately, the impact damaged the thread of the screw-on filter and, try as I might, I couldn’t get it off. My tools consisted of a large shifter and pipe wrench (also known as ‘the persuader’), a pair of oversized vice grips, and a hammer.

I’d never opened a walnut with a sledge hammer but I thought I’d give it a go. Grasping the edges of the filter in the jaws of the pipe wrench, and twisting the (rather expensive) lens in one hand, I attempted to coax it loose – to no avail. I had only one option: make a mercy dash into Darwin on the off-chance that a camera store would have the tools and know-how to work the filter loose.

I knew from experience that the Arnhem Highway, which would be our route out of Kakadu, was less spectacular than the drive in. But, as we discovered, that doesn’t mean the 200-odd kilometres of bitumen, which connects Jabiru to the Stuart Highway and is the most direct route to the northern capital, has nothing going for it. 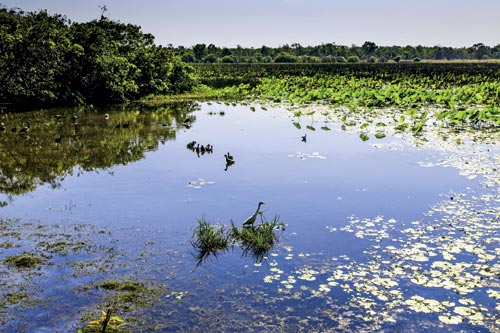 Our visit coincided with Wurrgeng and Gurrung, the dry season when most creeks stop flowing and the floodplains dry out. Snakes begin their hunt, and birds, particularly magpie geese (also known as bamurru), fill the receding billabongs.

Unless you fancy a 4WD adventure to the Pococks Beach camping area, west of the South Alligator River inlet, Mamukala Wetland is the only true Kakadu attraction on the Arnhem Highway.

Part of the considerable South Alligator River floodplain, the wetland is a particularly important habitat for magpie geese. When the waters are shallow enough, they flock in their thousands to Mamukala to feed on spike-rush bulbs, using their hooked bills to dig into the mud to find them.

But when the water completely evaporates, the mud becomes too hard for the magpie geese, forcing them to return to their breeding grounds.

As well as magpie geese, Mamukala is visited in the late Dry by around 60 species of waterbird. A large purpose-built viewing platform is set on the edge of the wetland, an easy 100m walk from the carpark, and is the best place to take in this intriguing natural environment.

For the more adventurous, there’s a marked, circular 3km walking track (check wet season access) that winds its way around part of the wetland – we gave that option a miss as the main viewing platform really does provide an excellent vantage point.

Throughout the entire Kakadu trip, I’d wanted to see a croc leaping out of the water, or at least doing something equally interesting.

The crocs in Yellow Water were plain lazy, sprawling on the mud banks without a care in the world. Cahills Crossing, the East Alligator River causeway into Arnhem Land, was a bust, too. We’d been told to expect an 11am feeding frenzy, when high tide would corral fish into an easy target.

To experience some (safe) crocodilian excitement, you apparently have to leave Kakadu altogether.

So it was for us. About half an hour from the Stuart Highway is an establishment on the Adelaide River. Forty dollars will buy you one ticket aboard either the double-decker Adelaide River Queen, the Kakadu Spirit or the smaller Pathfinder for a one-hour cruise during which you’ll see, up close and personal, 6m estuarine crocs leaping from the murky water.

How does it work? Well, when the boat is stationary, they secure a hunk of red meat, bones and all, to a pole and dangle it overboard. It isn’t long before a croc approaches and, with the meat a short distance from its snout, the croc uses its powerful tail to launch almost entirely clear of the surface, snatching the meat in its mighty jaws and chowing down. The action is so close that you can see the meat stuck between the croc’s teeth and hear bones crunching.

What’s more, the crocodiles are in their natural habitat, not in captivity. The tour operator says that because each interaction is quite short – only a few minutes a day – the crocodiles’ hunting and survival instincts are in no way diminished.

After stocking up in Humpty Doo, a small town on the corner of the Arnhem and Stuart highways, be sure to head south to Berry Springs Nature Park. Okay, this attraction is not actually on the Arnhem, but it’s so close and so worthwhile that it would be a crime not to visit when you’re in this part of the world. Besides, after a considerable amount of time on the road, a soak in a thermal pool is highly restorative.

Drive for 10 or 15 minutes along the Stuart Highway, turn right on Cox Peninsula Road, and travel for around 10km – Berry Springs Nature Park is on the right and well signposted.

The springs consist of a series of three pools, starting with the Berry Springs Waterfall, a short walk from the carpark. From there, the crystal spring water meanders to the much larger main pool. Bathers young and old were enjoying the temperate, shaded water when we visited. A ladder provides reasonably easy access to the pool. The only drawback was the small fish that welcome you by nipping sharply at your ankles. Fortunately, the lower pool – the third in the series – is devoid of these little biters. At least, it was during our swim.

Berry Springs formed part of a rest and recreation camp during World War II for the 100,000 personnel based in the area. Huts and a weir were built at Berry Springs and the remnants are visible around the main pool.

The pools are occasionally closed during the wet season, but the park is nonetheless a good spot for a picnic and wildlife spotting – we saw a kangaroo, jabiru and more during a quick walk around. A longer walk would no-doubt yield plenty of sightings of the local fauna.

Mamukala Wetland is the last and main attraction in Kakadu on the Arnhem Highway. For more information, visit www.environment.gov.au/parks/kakadu.

There are a number of jumping-croc cruises in the vicinity of the Arnhem Highway – just follow the signs. We went with Adelaide River Queen Cruises, which has four departure times throughout the day. For more information, visit the website www.jumpingcrocodilecruises.com.au.