The adrenalin is pumping as we turn off the Strzelecki Track, NSW, onto the Cameron Corner Road, with red undulating sand dunes set firmly in our sights. It’s a far cry from the four-lane highway of the Strzelecki from moments earlier. With the Topaz tagging behind, we’re off to experience the popular, albeit remote, Cameron Corner, where about 180 vehicles per day pass through in peak season.

The sandy rolls of the Strzelecki Desert continue all the way to the corner – the intersection of three states – averaging around 10m in height. Surface conditions vary throughout the year and with the volume of passing traffic. We found the going reasonably good, although the corrugations and potholes on the final 20km stretch through the back of the dunes etched their own place in our memories. After navigating the northern Flinders Ranges earlier in the day, it was bordering on dusk as we neared the corner. Animals roam freely thanks to the stockyards and bores and can appear from nowhere – especially back of the dunes where visibility is limited – so care is essential. 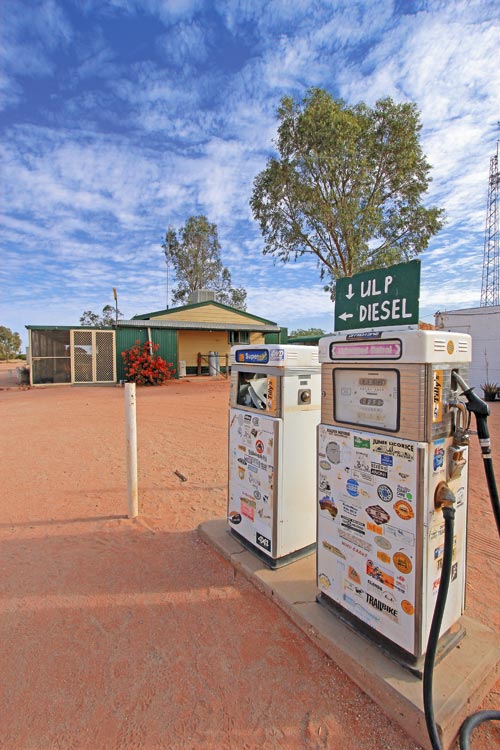 There’s an old yellow double-decker bus just off the road at Bollards Lagoon. Although a well-worn track leads to the bus, it’s located on private property, so camping and fires are prohibited.

You can, however, unburden your load at the Cameron Corner Store, one of those rare outback gems set up to support adventure tourism near the intersection of three state borders: Queensland, New South Wales and South Australia. Vietnam vet Sandy Nall acquired the land when he recognised its potential as a tourist hub and built the Corner Store with his friends, opening the doors in 1989. Sandy passed away in 2004 but a plaque mounted on a granite block near the survey marker at Cameron Corner pays tribute to his vision. Since then, ownership has changed hands many times and currently rests with Fenn and Cheryl Miller. They’ve worked at the store for nine years and as owner-operators for the last four.

Captain Charles Sturt was the earliest explorer to pass through the area in 1844, followed by Burke and Wills in 1860. Cameron Corner was eventually named after NSW Lands Department surveyor John Brewer Cameron, who marked the intersection of the three states with a survey post in September 1880. The original survey marker has since been relocated to the National Parks and Wildlife Service (NPWS) centre in Tibooburra, NSW – 140km south-east.

A 1.8m-high fence protects the grazing districts further south and is declared the longest fence in the world at 5614km, spanning from Jimbour in Queensland’s south-east to the Great Australian Bight. The fence was designed to stop rabbits crossing state borders but, since populations were established nationwide, the project was disbanded. Don’t be tempted to drive along the maintenance track that parallels the fence as it’s reserved for the boundary riders who maintain the structure.

The roads into Cameron Corner are not suitable for many vans due to the sandy and undulating nature of the surrounding desert. An alternative is to camp in Tibooburra or in one of the Sturt National Park campgrounds and take a day-trip out to the corner. There are rooms available if you want to stay overnight.

The pub is the most popular feature of the store, serving meals and beverages seven days a week. There’s a campground with powered and unpowered sites, air-conditioned accommodation, a camp kitchen, amenities block (flushing toilets and hot showers), fuel and a mechanical workshop for tyres and minor repairs.

Otherwise bush camping is available to the east of the store, with proceeds donated to the Flying Doctor. Fenn pegs your endowment with a small weight and thumb tack and urges you to throw it over your shoulder and lodge it on the roof lining. If you hit a light bulb, you shout the bar!

Fenn and Cheryl also keep the store’s nine-hole golf course, which has three holes in each state.

It’s typical outback terrain and, if you’re not careful, you can lose your balls in the hazards: Fenn told me a producer of a well-known travel show ‘almost had kittens’ when he lobbed a ball into the rough on the first, prompting a feral cat to launch itself into the air.

“A few adjectives were dropped,” said Fenn with a wry smile. “It’ll be interesting if they can resurrect anything from the cutting room floor.”

The next day, we continued through the fence and into New South Wales to scope out one of the largest parks in the state, made up from six former pastoral holdings. Within the Sturt National Park, the succession of undulating sand dunes up to 15m high continues all the way to the Fort Grey campground, which backs onto Lake Pinaroo; an internationally recognised Ramsar wetland. If the lake is dry, you can walk across and check out the tree that Sturt marked in 1845, otherwise it’s a long detour around the lake – too far for many of us mere mortals, at 16km. For something less taxing, you can explore the Fort Grey Homestead ruins, the same site where members of Sturt’s expedition bunkered down and built a stockade to protect their herd, while Sturt continued further north in search of the inland sea.

The campground has plenty of facilities including pit toilets, a covered food preparation area with gas cookers and untreated water. There are plenty of trees providing at least some afternoon shade from the searing heat.

Tibooburra, outback NSW’s hottest town, is a further 140km east. You’ll need to negotiate more dunes to get there but the road has a reasonably firm base, so it’s not like slogging across the Simpson. The landscape flattens out to reveal wide brown gibber plains with limited tree cover. Numerous lizards keep you on your toes and, in particular, the bearded dragons, which perch themselves on rocks beside the road. Shinglebacks are also common and sleep better than they move, faring poorly in the highway pancake stakes.

If your car has air-conditioning, the Gorge Loop and the Jump Up Loop self-guided drives offer an interesting way to keep cool. At around 100km each, they’re long but there are plenty of historic ruins to explore and artefacts to discover, plus various landscape highlights.

The Dead Horse Gully campground outside Tibooburra has a great feel and is set amongst large granite boulders. As it’s close to Tibooburra you might even find you have a mobile broadband signal.

Camping in the desert has its own unique charm, from peering up at a constellation or admiring the arid landscape and pondering how the early explorers withstood such a harsh environment. I still can’t believe Sturt’s men lugged a substantial wooden boat in search of an inland sea.

The Cameron Corner Store adds to the interest to the landscape and encourages city dwellers to step out and discover outback New South Wale. It’s a worthy addition to any bucket list.