IT'S SAD YOU feel the rhythm of Australia in the tropics, the Barrier Reef or the earthy outback. However, the New England highway, which runs from Hexham, NSW, to Yarraman, Qld, beats to a different drum. And for those fortunate enough to experience it, this is Australia.

I chose to tackle the New England from Brisbane, via Toowoomba, in order to avoid the washed out shorter route through Cunningham’s Gap. Around 130km west of Brisbane, Toowoomba is more than the junction of the Gore, New England, and Warrego highways. It’s an elegant city with superb parks and gardens, fine dining, beautiful art galleries and intriguing history.

Apart from remarkable places like the Japanese Gardens, you can enjoy the city’s dining culture at Café Valetta, Park House and many others, mostly located on Margaret Street. You can then check out Tosari Galleries. As for history, go for the recently renovated Cobb & Co. museum.

With so much to do, heading further south was a reluctant choice.

If the idea of travelling in sight of some amazing granite formations, lush green orchards and historic homesteads sets your heart racing, try heading south from Toowoomba to the NSW border town of Wallangarra, on the part of the New England Highway known as the Country Way.

About halfway to the border from Toowoomba, drop into the Southern Downs rural hub Warwick and discover Qld’s best original sandstone buildings and historic homes.

En route to Warwick, turn off the highway after driving for about half an hour south of Toowoomba, and drive up further than Ma Ma Creek. You will soon come upon the land of Australian author Steele Rudd, with the village of Nobby – home to around 200 – at its heart. The New England Highway bypassed this little spot some years ago, leaving it an almost forgotten rural relic.

Not far away, down by Emu Creek, you’ll find a replica of a slab-hut that was home to early 20th century author Arthur Hoey Davis, better known as Steele Rudd, who penned the popular Dad and Dave stories, such as the well-known On Our Selection.

In town, a great little pub, once called the Davenport and known for some years as Rudd’s Pub, works hard at keeping this little place on the map, perpetuating Steele Rudd’s literary legacy.

An hour or so after Warwick, the town of Tenterfield stretches out her welcoming arms.

Tenterfield bills itself as the gateway to the New England and Northern Rivers regions of NSW. What’s more, it’s something of an epicentre of Australian political history: it was here Henry Parkes gave his 1889 speech that sparked the idea of Australian federation.

Wander along Rouse Street and you’ll see an array of interesting buildings, including the old post office, and down the back of town you’ll find the old railway station. The 1886 opening of the station was celebrated as “the biggest event in NSW?railway history”.

Although the station’s big events are well behind it, it’s certainly still worth a peek, if only for the chance to meet some of the volunteers who keep the station in perfect order.

One such volunteer, Audley Smith, stands on the platform of the Tenterfield Railway Station, as if waiting for a train that will never come. Although not a railway man in his younger days, this peaceable bloke is very familiar with all of the museum’s displays, including the old rail motors, gun carrier, meat wagon, gravel tender and other war relics, as well as the model railway.

As he talks, fellow volunteer and museum association president Geoff Benson swaggers along the platform. The former sheep farmer, with his menagerie of volunteers, works constantly to make the museum a worthwhile stop.

Beyond the old station, Tenterfield’s all about fossicking for sapphire, emerald and topaz, especially at the 7 Oaks Fossicking Property. There is also great bushwalking at the Goonoowigall Bushland Reserve, interesting local vineyards and, for those after adventure, white water rafting on the Gwydir River.

When you’re looking for somewhere to set up camp, the Tenterfield Lodge Caravan Park is a great option. This former gentlemen’s club is a worthwhile stop.

It was here we came across semi-retired accountant and one-time oyster farmer Frank Nudsen who, along with his wife and their dog, was getting ready to move on to nearby Ashford to do some fishing by the Severn River. Frank believes the Severn is best for freshwater cod or yellow belly, but wasn’t about to give away too many secrets.

Leaving Tenterfield, we travelled further south through the little town of Guyra, known for trout fishing in nearby streams, as well as its Potato and Lamb Festival. We then moved onto Armidale, via Glen Innes.

Glen Innes is all about Celtic culture, and even has its own standing stones to prove it. We checked out the comfortable Fossicker Caravan Park and were delighted to discover it has its own mini-fossicking field behind the office. What’s more, it must have the last petrol station in Australia to still offer driveway service. A very novel experience.

Old world yet modern, rural yet sophisticated, Armidale is an amazing concoction of simplicity and elegance. Charming, with a hint of larrikin, it’s a place where you can share a yarn with James Burton down at Burton’s Saddlery, or sip coffees at the Courthouse Cafe. You can take in the galleries and shops, and then admire the stately rural buildings that are one of the city’s hallmarks.

Armidale also offers a chance to explore Waterfall Way. Close by, at a point where rolling pasture turns into eucalypt forest, Dangar Falls plunges around 30m over square-faced basalt walls.

There is also Ebor Falls, just near Fusspots Tea House in Ebor. These falls, on the edge of Guy Fawkes National Park, roar over two drops within a very short walk from the car park.

Then there’s Wollomombi Gorge, a very short distance from Armidale. A massive chasm’s inhospitable walls, where small trees and shrubs struggle to cling for life, allow the Wollomombi and Chandler falls to cascade 260m to the floor.

You shouldn’t drive the New England without stopping at Uralla, south of Armidale. This is the true gem of the region, where you will discover the grave of notorious bushranger Captain Thunderbolt, plus an array of fascinating shops and cafes.

Stop into McCrossin’s Mill and have a chat with museum custodian Kent Mayo. He’ll tell you some rippers about Thunderbolt, or a mysterious chest found in the town’s historic Stokers Store, or Australia’s first international athlete, and many more.

If McCrossin’s presents a look at history, Gusto Cafe offers a fine dining experience in an eclectic antiquarian bookstore. It’s hard to pass up the chance to meet Gusto owners Kim and Ross Burnet. Kim’s passion for cooking is matched only by her husband’s love of quality old books. The combination is unforgettable.

We were so taken by Armidale and Uralla that we stayed over at the Pembroke Tourist and Leisure Park. This is a top-quality park and well worth considering.

Around an hour beyond Uralla, we had Tamworth in our sights. Since 1972, this little NSW town has played host to Australia’s premier country music festival and the best of the nation’s country stars, from Slim Dusty and Smokey Dawson to John Williamson and Lee Kernaghan.

Luckily, we arrived on the Australia Day weekend, the prime time of the 10-day festival. And what a festival! Across the pubs and clubs, and up and down its main drag of Peel Street, this town is buzzing. Beyond the chart-topping country music performers, there are hundreds of buskers hoping to make it big.

From out of that cacophony of sound comes, every January, the rhythm of the New England, the beat of Australia. 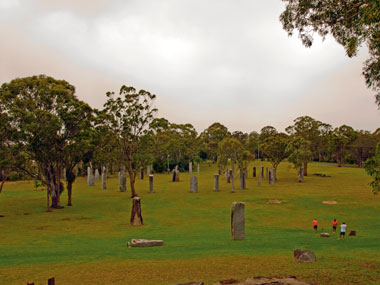 The New England Highway is 887km long and runs from Hexham, near Newcastle, NSW, at its southern end to Yarraman,
near Toowamba, Qld, at its northern end.