FOLLOWING THE CAVALCADE of caravans heading north from Sydney on the Pacific Highway, we quickly entered the beauty of the NSW mid-north coast. Pointing the van and tow vehicle towards Nelson Bay, we were greeted with pristine sweeping bays, abundant national parks and sand dunes that seem to stretch on forever.

At two-and-a-half times the size of Sydney Harbour, Port Stephens is a water wonderland. You can enjoy fishing, kayaking, boating and snorkelling, or explore the many cafes, walking trails and sandy beaches. Caravanners are well catered for with a wealth of holiday parks nestled in the prettiest of places, facing either a creek or beach, or surrounded by bushland.

There is so much to see and do you could easily stay for a weekend, a week or longer. The Port Stephens region covers almost 1000 sq km and is defined by the Tomaree and Tilligerry peninsulas. 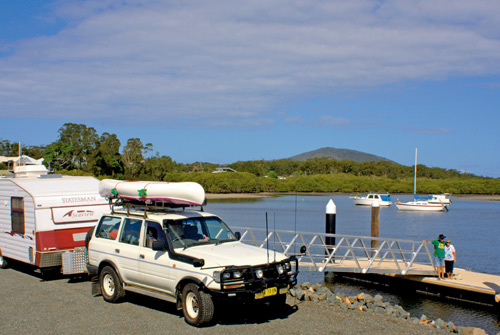 Tomaree is the most easterly of the peninsulas and is the tourist hub of the region, characterised by the buzzing town of Nelson Bay. This hot spot is complete with a marina, an assortment of shops and a good collection of eateries. Admire the (multi) million dollar yachts moored at d’Albora Marina while enjoying a dinner of fresh seafood. If you prefer to catch your own fish, the rock wall behind Nelson Bay’s Fisherman’s Co-op is a great spot to start.

Or if you would rather swim with the fish instead of hooking them, Fly Point, between Nelson Bay and Little Beach, is a recommended spot to snorkel. You can meet some of Port Stephens’ locals aboard a dolphin watch cruise, operating out of Nelson Bay. Port Stephens is well regarded as a dolphin habitat with some 100 bottlenoses calling the port home. If you’re visiting between May and November you may spot the acrobatic antics of humpback whales as they migrate past. Whale cruises depart from Nelson Bay, or you could try your luck gazing out from nearby Fingal Bay and Anna Bay.

Fingal Bay’s sheltered southern end is a popular swimming spot for families. Surrounded by Tomaree National Park, Fingal Bay was originally called False Bay: during the 19th century it was occasionally mistaken for the entrance to Port Stephens. The beach fishing here is known to be some of the best in the area, so make sure you take your rod.

Fingal Bay has its own island connected by a sand split and the ruins of the outer lighthouse residence are located here. You can cross the sand split at low tide, but it’s always best to exercise caution.

Stockton Beach is Australia’s largest sand mass and is a popular spot for 4WD enthusiasts and fishermen alike. Some dunes reach a staggering 40m in height and the beach stretches for 32km. Peculiar sights among the dunes include a scattering of fishing shacks called Tin City, WWII relics and the rusty shipwreck of the Sygna.

The ship met its fate in 1974 when it ran aground during one of the most severe storms recorded in the region. Fortunately, all crew were winched to safety. The bow of the ship was sold oversees for scrap while the stern remains firmly lodged in the sand.

If you’re confident in taking your 4WD for a spin on the sand, Recreational Vehicle Area permits for the Stockton Bight sand dunes (Worimi Conservation Lands) can be purchased at a number of outlets, including the NSW National Parks and Wildlife Service Hunter Region in Nelson Bay, the Port Stephens Visitor Centre, the Birubi Beach Holiday Park, One Mile Beach Holiday Park and the Birubi Beach Service Station in Anna Bay. An annual permit costs $30 and a three-day pass will set you back $10. Dogs are allowed on Stockton Beach, provided they are on leads at all times.

The other dog-friendly beach on the Tomaree Peninsula is Bagnalls Beach, between Dutchies and Corlette. Facilities here include barbecues, a playground and amenities.

There are 26 stunning beaches to choose from in Port Stephens, but my personal favourite is Shoal Bay. This is a delightful spot east of Nelson Bay and in addition to boasting a picturesque beach, Shoal Bay has a small string of shops and cafes facing the water. The grassy reserve is a popular spot for a picnic.

Take Shoal Bay Road to the Tomaree National Park car park and follow the walking trail to the 161m Tomaree Head summit and you’ll be rewarded with panoramic views over Port Stephens and its offshore islands. For those feeling a little less energetic, another good lookout is on Gan Gan Hill, accessible by vehicle.

The Nelson Head Heritage Lighthouse Cottage and Reserve also boasts impressive views over the bay and to the entrance to Port Stephens. This National Trust classified building holds an interesting display of early maritime relics. Entry is free, but a donation is appreciated.

While you’re in the area, don’t forget to venture to the Tilligerry Peninsula. Head west to Salt Ash and take the Lemon Tree Passage Road to explore Tanilba Bay and visit the convict-built Tanilba House (1831), one of the oldest historical monuments in Australia.

Built for naval officer Lieutenant William Caswell, the homestead is decked out in period-style furniture and features letters written by the Caswell family, clothing from the late 19th century, period newspapers and other fascinating memorabilia. There is a small gaol on site and even rumours of a resident ghost.

Tilligerry Habitat Reserve is a peaceful spot to observe koalas in their natural environment. The 1.8km walking trail meanders around the reserve and Tanilba Bay and is also dog-friendly, provided they remain on a lead.

Nestled in Lemon Tree Passage, and overlooking Tilligerry Creek, is the quiet and tidy Discovery Holiday Parks – Port Stephens. We settled here for the night to rest up for another day of exploring.

At the northern shore of Port Stephens rest the twin towns of Tea Gardens and Hawks Nest, each well deserving of a poke around. You can venture across from Nelson Bay to Tea Gardens aboard a ferry, or weave back to the Pacific Highway and head north until you pass the big rock, taking the Tea Gardens exit.

Tea Gardens and Hawks Nest are part of the Great Lakes region. While separated by the Myall River, they are connected via the Singing Bridge, so named for the noise the wind makes as it blows through the rails.

Tea Gardens is a quiet fishing village facing out to the Myall River. I can recommend the fish and chips from Hook ’n’ Cook and the ice cream from the Tea Garden Ice Cream Shack.

After a hard day’s touring we settled along the river bank to watch the passing parade of pelicans, boats and kayaks.

For some retail therapy, join the locals at the Tea Gardens Village Markets (located in the village square of the Myall Quays Shopping Centre) on the third Saturday of the month. The nearby Bulahdelah Markets, on the corner of the Pacific Highway and Crawford Street, are held on the first Saturday of the month.

With sheltered coves, rugged surf beaches and the tranquil Myall River, Hawks Nest is a lovely spot to while away the hours. Happy fisherfolk were reeling in bream, flathead and whiting from a jetty on the river as hungry pelicans eagerly waited by the fish cleaning table.

Hawks Nest is blessed with superb beaches, including Jimmy’s and Bennetts beaches (the latter also known as Hawks Nest Beach). The southern end of Bennetts Beach has been dubbed a “dolphin’s playground” and stretches for 14.3km, with views out to the offshore islands, Cabbage Tree and Boondelbah Island, which are fringed with magnificent marine life.

If you’re very fit and motivated you may wish to take the gruelling hike from Bennetts Beach to the top of Yacaaba Head, which forms the entry to Port Stephens along with Tomaree Head. The walk is rated as “difficult” and is very steep in parts, but the views make the trek worthwhile.

Whether you choose to stay in Tea Gardens, Hawks Nest or Port Stephens, you are in for a rich touring experience. From gentle bays and surf beaches, buzzing bayside towns to sleepy fishing villages, this beautiful pocket of NSW has it all.
Source: Caravan World Jun 2011.