Sometimes you go to a caravan park because it is a great base from which to explore the tourist attractions in the area. Other times you go there just to get away from everything and everyone and do nothing.

I like it when you find a park that gives you both, and does that without even trying. Moonee Beach Holiday Park, a member of the Top Tourist Parks chain, is one such park. You don’t stumble across it, you have to really want to get there because it is around 1km off the Pacific Highway – which means it’s peaceful and quiet. It’s also a 10-minute drive south to the closest main town of Coffs Harbour. One way or another, Moonee Beach Holiday Park is relatively isolated. 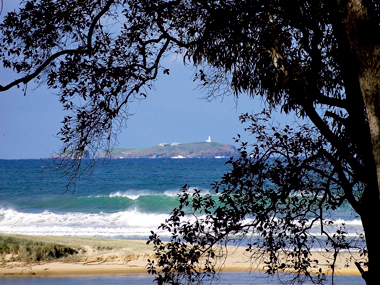 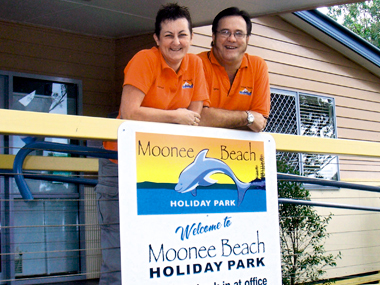 Peter and I started going there about three years ago, and enjoyed the feeling of the park – plenty of trees, lots of birds but not much else. The park is an old one and had been run by the local council through various administrators for many years, seemingly with the attitude that caravan parks were not really important and people were free to take it or leave it.

As with all councils, changes have taken a long time to come about, and some of them are still on the drawing board. About three years ago a caravan park management company called Australian Tourism Park Management took on the management of the park and started the careful job of bringing Moonee Beach into the 21st century without destroying its essential character and purpose. At the same time the overall responsibility for the future of the park transferred from the council to a section of the NSW Lands Department, who are serious about the future of ‘their’ parks.

Luckily for everyone, the essential character of the park stayed the same while much-needed changes took place. Eugene and Leanne Anderson, the managers of the park for the past couple of years, have overseen most of the work. During that time the amenities have had a good make-over, including locating and fixing a water leak that had been a problem for many years and that just about washed a wall away.

Once the repairs had been completed it was amazing what a coat of paint and Leanne’s attention to detail did. I have a fondness for some of the older amenities blocks simply because of the comfortable size of the showers, with room to ensure that your clothes do not get wet while you do.

Another change was the development of the camp kitchen, which has become a social hub for the park and also hosts a ‘hot spot’ for free wireless internet connections. If you travel with your laptop then you know how handy this facility can be.

But that has not been the end of it. In the last year the old office has been replaced with a superb office with a new residence behind it. At the same time three “Dolphin” two-bedroom cabins were put in, called “Bucky”, “Zippy” and “Bella” after the dolphins at the Pet Porpoise Pool in Coffs Harbour. A touch of humour prevailed and the manager’s residence has been called “Calamity”.

If you want to spend some time relaxing or if the children want to get wet, there’s a superb tidal lagoon leading out to the Pacific Ocean which thunders away at a nice safe distance. Even when the tide is in, the lagoon is still calm because of the sand banks providing a breakwater.

The Coffs Harbour area has an incredible number of national parks and reserves, with the closest to the park being the Moonee Beach Nature Reserve that forms the boundary on the eastern side of the park, although walking along the beach can be cut short at high tide. There is a headland in the reserve called Look At Me Now, best accessed from Emerald Beach to the north, that is a superb spot for whale watching in season.

For the bird lovers, Muttonbird Island Nature Reserve in Coffs Harbour is a bit of a challenge unless you like climbing up hills, but it is worth the effort.

Captain James Cook included the name Solitary in each of the five offshore islands. South Solitary Island is home to the Solitary Island Lighthouse, which was the first, and last, lighthouse in NSW to use a kerosene lamp. You cannot visit the lighthouse but you can see the lamp on display in the Coffs Harbour Museum.

The pace of change in the park is not fast, which is as it should be: when a change has been made, it needs to settle in and become part of the fabric. Some caravan parks have a special something about them; you either instinctively like them or you don’t. As a regular returnee to Moonee Beach I am happy to say that, although some things have changed, it still has that certain something that makes you want to come back.