As soft-roader SUV wagons slowly replaced their tougher, higher tow-rated 4WD predecessors, it left a gap in the market. There was a point where $50,000 didn’t buy you much with decent tow capacity, unless you bought a 4WD ute.

That all changed late last year as the ute-based 4WD wagon market was invigorated. Not only did you have the choice of Mitsubishi Challenger, Isuzu MU-X or Holden Colorado 7, but also the Ford Everest (based on the Ranger) and the Toyota Fortuner (based on the HiLux). Of course, the Triton-based Mitsubishi Challenger was replaced by another, newer Triton-based wagon, the Pajero Sport.

The Fortuner needs a step-up to get into it but, once there, you’re in a comfortable, spacious cabin, and the driver gets a good view out. The controls and instruments are easy to see and use, although a digital speedo readout would be nice. The large infotainment screen is clear and easy to operate, although we found the guideline for hitching up a trailer was not accurate. 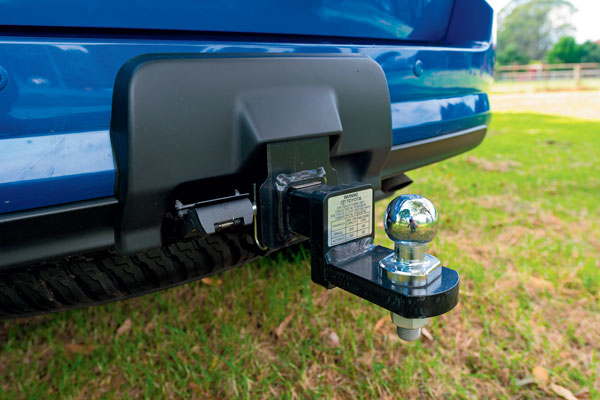 The second-row seats offer plenty of room – enough for three adults, for a shorter haul at least. Second-row access to the third row is set up for left-hand drive markets – the one-third split seat is on the offside.

The third-row seats fold up into the cargo side walls, which is terribly old-school, and soaks up valuable cargo space when the seats are folded up. At least there is enough room in the third row for sub six-footers, for a short urban haul anyway.

The Fortuner’s 2.8L engine is, incredibly, lacking in something that almost all turbodiesels have – turbo lag. Response off-the-mark is like a petrol engine – that is, instantaneous. Where there is a delay in response is in slow-speed, roll-on situations when quick acceleration is called for, such as when making for a gap in traffic. The engine also revs out to just past 4000rpm quickly but it is a noisy diesel, especially when compared to the Prado, which shares the same engine. In the Fortuner, the 2.8L is not particularly smooth, either.

However, the six-speed auto has a good spread of ratios and generally shifts smoothly. The steering wheel-mounted paddle shifts are a good thing, too, especially when you need to pull back a gear or two to get some engine braking happening when heading down a steep descent.

Toyota recommends the use of a weight distribution hitch (WDH) when towing and also the use of a sway control device when the trailer weight is greater than the vehicle weight.

We don’t use a WDH or sway control device on tow tests, unless the manufacturer deems it mandatory, because it reduces the amount of information you can glean about towing dynamics. While the Fortuner’s front rose just 10mm with the van’s 250kg towball mass (TBM), the rear dropped a significant 43mm.

The effect of this quite high TBM was that the Fortuner didn’t feel rock-solid while towing. It had a slight nervousness to it, although it never actually felt unstable. When towing something with a high TBM, the use of a WDH would be a good idea.

The Fortuner has great off-the-line performance and makes a very stable, comfortable and economical highway tourer. As a tow vehicle, it performs well and is relatively economical. Yet, with a high towball load it obviously needs a WDH fitted, and once that has been sorted, it would tick all the boxes as a great all-rounder.