The new Subaru Outback is 10% more aerodynamically efficient than previous models, and this and other changes, such as reduced friction in the Lineartronic CVT auto, have netted a 3.1 per cent reduction in fuel consumption. While it is lighter on fuel, Subaru has decreased the fuel tank size from 65L to 60L – the benefit being a weight reduction of just under 1kg. Use of aluminium for the bonnet also shaves 7kg from the kerb weight.

The diesel has come in for some fettling in the fifth-generation Outback. The compression ratio has been lowered from 16.3:1 to 15.2:1, lowering combustion temperature and reducing NOx. Piston skirt coating has been changed to reduce sliding resistance and improve fuel economy. 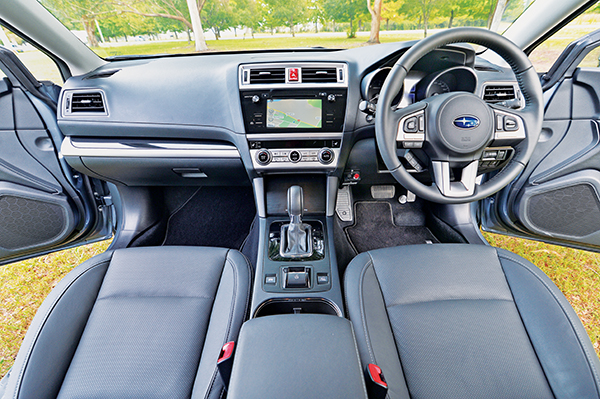 Meanwhile, the Lineartronic CVT has an automatic mode or a seven-step manual mode, using the steering wheel-mounted paddle shifters.

How does this translate on the road? It’s hard to minimise diesel clatter and vibrations but Subaru has done an excellent job. At idle and low revs, it’s hard to tell it’s a diesel. Sure, as the tachometer swings past 3000rpm, the engine makes its combustion type pretty clear, but then it is not as intrusive as some can be.

Performance is very good, with turbo lag minimal and the engine works well in tandem with the CVT to ensure the engine stays in the torque band most of the time.

The Outback handles and rides well, with a sure-footedness thanks to its all-wheel drive system. The steering is slow to turn in but is direct enough. The original-equipment tyres reach their adhesive limit sooner than you expect, but otherwise this is an accomplished package. Ride is firm on the 18in wheels but suspension travel appears pretty good and sharp bumps and road shocks are well-suppressed.

Fuel consumption is quite low in the Outback, with an average figure of 8.4L/100km in a mixture of urban and intra-urban driving. When towing a 1580kg caravan, fuel consumption averaged 15.8L/100km.

When we hitched the caravan to the Outback, the van’s 160kg ball weight made the Outback sit 30cm lower at the rear. This is bang-on where I would consider the limit of a drop, and some may consider the use of a weight distribution hitch a good idea.

As it turned out, the Outback was very stable with a caravan behind and, while performance was muted, it still performed well up our test hills. Speed dropped from 80km/h to 75km/h on the steep climbs. Engine braking, using the CVT’s stepped manual mode, was adequate – the Outback was able to peg speed, but not as assertively as a diesel often does. It was more like a petrol engine, meaning that, while speed was kept at the desired level, it required a dab or two of the brakes to ensure it didn’t run away.

One of the main sticking points with the Outback as a tow vehicle is not how it performs – rather it is the strictures that Subaru puts on owners when towing. According to Subaru, speed should not exceed 80km/h when towing.

While our caravan weighed 1580kg Tare, it should be noted that you could not tow such a van with the Subaru while taking advantage of such a van’s 300kg load capacity. With a 1700kg maximum towing capacity, you would be overweight with just 120kg of payload in the van. For the purposes of this tow test, the van chosen was entirely legal and appropriate.

There are not many medium diesel wagons with the towing capacity of the Subaru Outback 2.0D. This is a good start, rounded off by the Subaru’s comfortable interior, pleasant ride and handling, and unobtrusive torquey diesel engine. However, fuel consumption when towing could be a lot better, and many will find the 80km/h towing speed restriction too onerous for modern caravan touring.