There has been a decisive shift away from the traditional, tough 4WD mid-size wagons to the softer, car-like SUV wagon. A separate chassis, live axle and low range gearing are all yesterday’s news for mainstream buyers, who now prefer the softer ride and better performance offered by a newer breed of SUV all-wheel drive wagons with monocoque chassis, all-independent suspension and single-range transmission.

Although the market for traditional offroad 4WD wagons has contracted, it hasn’t vanished altogether. Developing a new vehicle is not cheap, and this is where a couple of manufacturers have discovered the way to do it is to build a small-volume wagon derivative from a high-volume offroad ute.

That explains the existence of models like the Mitsubishi Challenger (based on the Triton), the Nissan Pathfinder (based on the Navara) the upcoming Ford Ranger-based wagon and the vehicle tested here, the Holden Colorado 7. 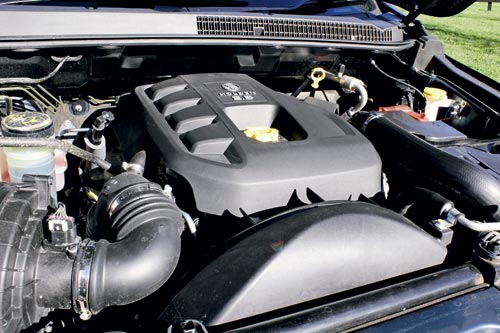 The Colorado 7 is based on the Colorado dual-cab ute. The Duramax 2.8L turbodiesel engine, six-speed auto and drivetrain are the same, as is much of the chassis. Even front sheet metal is shared. Differences are the rear end of the body, the nose treatment and the coil-spring rear axle in place of the leaf-spring design used on the Colorado ute. The ute sits on a longer wheelbase than the wagon and has a longer body.

The Colorado 7 has a very simple model line-up – two derivatives are offered, the entry-level LT and the more luxurious LTZ tested here. Both are only available with the six-speed automatic, and the LTZ’s standard inclusions list runs to leather seats (powered driver’s seat) front, side and full side curtain airbags, ABS brakes, electronic traction and stability control,

The climb into the Colorado 7’s cabin is much like any other separate-chassis vehicle – it is more of a climb up and in – and, once in position behind the wheel, there is a nice, clear display facing you. The driver’s position took some getting used to for this writer as the seat feels as though it tilts forward slightly, and the steering wheel is only adjustable for rake, not reach.

The Colorado 7 is easy to see out of, with ample side mirrors and the rear-vision camera display (integral with the rear vision mirror) works well, although the sonar parking sensor warning beep is disconcertingly – almost distractingly – loud.

The main controls are simple and logical but the smaller buttons on the centre stack, which adjust the climate control, are difficult to operate. The temperature adjustment dial is huge but, if you want to adjust anything else, no amount of getting used to it will stop you from having to take your eyes from the road to find the right button.

The good news about the air-conditioning is that the Colorado 7 has ceiling vents and independent fan control in the second row area.

The second row passengers have stadium seating – that is, a higher seat base than in the front – and so they get a good all-round view. Three adults sat in comfort on test. In saying that, the seat was, perhaps, a bit flat but not uncomfortable, while leg and head room was sufficient and noise levels low. The third row is easily to get to via the split-fold second row and while the seat base is set low to the floor, compromising leg comfort, for children this seat is more than ample. Cargo space with all three rows of seats in use is minimal – which is typical for a three-row wagon – but it is better than some, with an underfloor compartment adding to the floor space available.

The third row seat folding operation smacks of cheap design. The seat is bolted to the cargo floor and folds on itself, presenting an uneven cargo floor space and one that does not suit hard-edged cargo.

Even though some competitors aren’t much better, the Colorado 7’s interior doesn’t feel like a $50,000 cabin. Our example had rattles behind the dash too, only adding to the perception that this is a cheap interior.

The 2.8L Duramax diesel is an inline four-cylinder with a variable vane turbocharger and high pressure common rail fuel injection. Nothing new there. The aluminium cylinder head has four valves per cylinder driven by two camshafts and the diesel is direct-injected.

The engine ignites and settles into a rattly idle. It’s noisy driving around town and you never forget you’re driving a diesel. The normal turbodiesel pause from a standing start is not the hiatus it can be with some other turbodiesels and, so, the 2.8L sooner rather than later finds its mid-range voice. The ability to stay on-song in the meaty mid-range is aided by the slick six-speed auto. When on the boil in the mid-range, the Colorado 7 performs very well.

The combination of independent front and live-axle rear suspension on a separate chassis rarely makes for a supremely comfortable and dynamic on-road suspension. Some vehicles do a better job than others, and the Colorado 7 gravitates to the lower end of the list. It is not nearly as supple as a Prado and even the Challenger is a more contained vehicle to drive over undulating terrain. The Colorado 7 pitches on its soft front suspension and never feels quite settled unless the road surface is smooth. Roadholding is quite good for this type of vehicle and steering, though light, responds well to input. No surprises, good or bad, really, with the Colorado 7’s suspension.

With easy open-road touring on the cards, you can expect to get around 9.5L/100km from the Colorado 7. When towing with a 1500kg full-size tandem-axle caravan, however, the Holden consumed an average of 13.8L/100km.

The Holden took on the load of the caravan very well, hardly dropping in the rear at all. The suspension settled with the load on it, and though it pitched a little it was generally well-behaved and certainly stable with the van behind. Performance was quite good with 1500kg behind, but the hill climb knocked the wind out of it a little. It might not fare so well with a van approaching its 3000kg capacity, going by our experience with a relatively light van. Engine braking was very good.

The Colorado 7 offers caravanners an alternative to much more expensive 4WD offroad wagons and, with it, a higher maximum towing capacity. It has a strong mid-range, the chassis is stable when towing and its cabin is roomy. Yet the suspension is not as developed as it needs to be and the interior feels more like a $25K ute with leather than a sumptuous $50K wagon.