SSANGYONG HAS HAD a turbulent corporate history since the late 1990s, with a series of bankruptcies followed by yet another new owner stepping in to try to revive the company. This time, with Indian conglomerate Mahindra & Mahindra now signing the cheques, it appears that SsangYong is entering a period of stability.

A more stable design philosophy has also begun for a company that for years was not only bankrupt financially, but also in its design ethos.

From its small SUV, the Korando, which arrived last year and was designed by Italdesign, it became apparent the Korean company was no longer driven by a lemming-like desire to sell the least attractive vehicles on the market. This time, SsangYong means to build vehicles that buyers might like the look of.

Enter the latest Actyon Sports: a dual cab ute that first arrived in 2007 and this year has come in for a major makeover. Although the new sheetmetal – predominantly the front-end – has been designed in-house, the influence is modern and fresh.

Aside from new sheetmetal and a (slightly) tweaked interior presentation (primarily a new dashboard with LED lighting and double-layer construction for improved noise suppression), there is a new engine and new manual transmission. The six-speed auto, built in Australia, continues with tweaks to match it to the new engine.

The Actyon Sports does not emulate its competitors with their raft of body variants; it has only one body option, a dual cab pick-up, available in 2WD or 4WD with either manual or automatic transmission. There are three specification levels: the base model Tradie, mid-range SX and top-of-the-range SPR. The Tradie and SX are available in either 2WD or 4WD with standard manual transmission or optional automatic. The SPR is a 4WD, automatic-only proposition. We tow-tested the SX 2WD automatic.

The Actyon’s interior is a little plain in appearance but is comfortable and easy to see out of. Large side mirrors, an upswept tub (meaning you can see the tailgate from the driver’s seat when reversing) and no large blind spots make city driving a cinch. Like most of its competitors, the turning circle is large – as is the steering wheel diameter, meaning that more lock has to be applied for a turn than you’d think necessary.

The handbrake is on the passenger’s side of the centre console, betraying the vehicle’s left-hand drive origins and steering is adjustable for rake only – many dual cabs also have reach adjustment these days.

The rear seat is comfortable for a couple of adults and there is storage space under the seat base. The centre seatbelt is lap-only; most dual cabs now have lap-sash seatbelts in all positions.

The load area is 1275mm long, 525mm tall and 1600mm wide (1120mm between wheelarches), which makes it one of the larger trays in the class. The tray tailgate is linked to the central locking, useful for added security if you later fit a canopy. 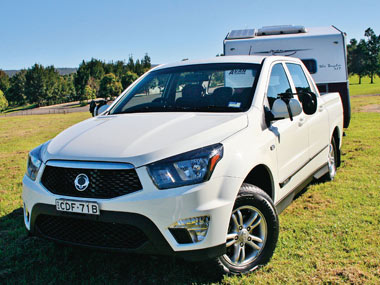 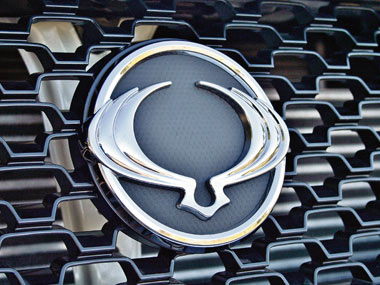 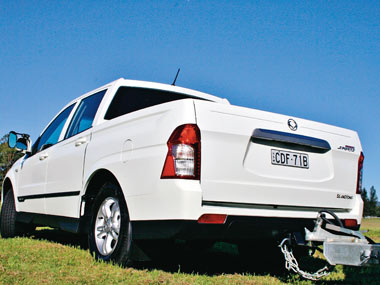 The e-XDi200 direct-injection 2L turbodiesel engine is the same as that used in the Korando, and in this application develops 114kW of power at 3400-4000rpm and 360Nm of torque at 1500-2800rpm, an improvement of 14kW and 50Nm respectively over the previous Actyon. The Euro-4 compliant e-XDi200 has a single turbo with variable vanes for better low-rpm torque.

The six-speed automatic is a new version of the DSI transmission developed and built in Albury, NSW, and that was first seen in the Actyon Sports released four years ago.

As soon as you put your foot down, you realise this is a much better engine than before. It is smooth, tractable and refined. Like all turbodiesels, there is some low-rpm turbo lag, but unlike some others that have variable vane turbo-chargers, this one seems to work.

The transition from off-boost to boost is seamless, and while the engine does feel a little unresponsive off idle, it is not long before the steam builds up and you’re away. What’s most satisfying about this engine is that its power delivery is progressive, making it much easier than some to make a gap in the traffic. Some turbodiesels can have an all-or-nothing torque delivery, but this isn’t one of them.

The six-speed auto has decisive, crisp shifts, but doesn’t slur its changes like some top-shelf Euro autos – this one is a bit more work-like. Even though it is a bit fiddly, the auto has a manual mode with the choice of gearshift buttons on the steering wheel or a flick-switch on the gearshift.

The Actyon Sports has a separate chassis with coil struts at the front and a coil-spring five-link live axle at the rear. This is the only ute in the class to have coil springs at the rear instead of leaf springs, which in theory should give it a better ride quality, but it has a clear disadvantage in payload capacity. Payload is just 727kg, when most of the utes in the class have about a 1t payload.

Quite a few Korean 4WDs since the mid-1990s have suffered from awkward suspension tuning and the Actyon, unfortunately, is no different. The springs and dampers don’t seem well matched and the result is a harsh ride at low speeds, with body flex and, occasionally, skipping over bumps. When driving on smooth roads you probably wouldn’t notice, but when the roads deteriorate, so does ride – markedly.

The Actyon is quite efficient when driving without a load, averaging around 8.5L/100km on a mix of urban and freeway driving. With a 1500kg caravan behind, fuel consumption rose to 15.1L/100km.

The Actyon Sports has a towing capacity on the low side when you look at the class as a whole. Still, 2300kg is not to be sneezed at. We towed a 1500kg tandem axle caravan, and the results were interesting.

When driving in urban areas, the Actyon shows a responsiveness similar to when unladen – of course you know you’ve got weight behind, but you don’t feel as though you must compensate for it all the time. If you need to grab the next lane and need a spurt of acceleration to do so safely, the Actyon obliges.

So too in our set-piece freeway hill climb. Initially, at least, the Actyon shifted down a gear and got on with business. In fact, we had to ease off the throttle as it was gaining too much speed – yet this coincided with the steepest section of the hill, and the 95km/h at which we were travelling was soon knocked back to 75km/h. It seems there is a point where there is no substitute for cubic inches. This was also noticed when we overtook a tractor on a single lane section – with ample sightlines and no oncoming traffic, we felt obliged to take a run up to pass the tractor safely.

Engine braking is quite good, with only a very steep hill requiring a feathering of brakes.

While it’s hard to be conclusive about stability with one vehicle and one van, the Actyon Sports did settle into a small swaying motion over bumps at 100km/h, and also pitches quite a lot on bumpy roads with its soft suspension.

Good value, good fuel economy when driving solo and a well-featured, easy-to-drive ute, the Actyon Sports is only marred by a lack of performance when towing and a less than desirable payload. In all, if you’re looking for good value and don’t expect a hill-flattening performance, then this vehicle could be for you.