THAT HUMBLE WORKHORSE, the dual-cab ute, is fast becoming one of Australia’s most popular vehicles – and it’s easy to see why. Utes are relatively cheap (compared with SUV wagons), there are many to choose from and there is a great sense of practicality about them. Add to this the fast-growing sophistication of each dual-cab generation and you have a logical alternative to the family sedan or wagon.

Arriving in 2005, the D40 Nissan Navara soon garnered much praise for its spacious and comfortable interior, versatile tray and powerful engine. Even better, it didn’t ride so badly; one of the traditional bugbears of leaf spring utes.

While the D40 has been offered with a 2.5L four-cylinder turbodiesel since 2005, it wasn’t until late last year that Nissan announced its V6-powered Navara, the ST-X 550, introduced as the premium Navara of the range.

The ST-X 550 is the most expensive off-the-shelf 1t dual-cab ute on the market today. For $60,990 it offers a reasonably comprehensive – if hardly overwhelming – level of kit. It is well specced for a ute, but if you’re looking for heated leather seats and a high-powered audio system, you need to pay extra for the Premium Pack.

The cabin doesn’t feel like a luxurious vehicle, but at least it is spacious. There is comfortable seating for five adults, and entry and exit is easier than many of its competitors.

The Navara’s controls are placed nice and high and the instruments are backlit, allowing a quick check on the vitals.

The 3L V6, called the V9X, is the result of the Nissan-Renault Alliance, and is an all-new engine that currently appears in the Navara and Pathfinder. Nissan is also talking about putting it in the new Patrol in years to come.

Alliance engineers have followed the lead of other V6 diesels (such as the Mercedes-Benz 3L) by specifying Compacted Graphite Iron (CGI) for the V9X’s block, as it is a material that offers high levels of stiffness and noise absorption, without the weight penalty of cast iron.

Although CGI is heavier than a pure alloy block, Nissan says there is no need to add stiffening ribs or extra sound-deadening material. This means the weight compression ratio has been lowered to 16:1 to benefit not just economy and emissions, but also noise, vibration and harshness, while internal engine friction is reduced by smooth components, such as the micro-finished forged steel of the crankshaft.

A Bosch common-rail fuel injection incorporates piezo injectors and operates at 1800 bar. While the 550Nm peak torque is achieved from 1750rpm, it extends to 2500rpm. At 1500rpm, the V9X is already churning out 500Nm.

The system incorporates an integrated exhaust gas bypass in the EGR cooler which quickens the warm-up period so the full cooling capacity can be used. This features a low temperature water circuit for the EGR cooler to further reduce exhaust gas temperature, and lower carbon monoxide and hydrocarbon emissions.

How do all these latest technologies combine in the real world? The V6 fires up to a smooth, quiet idle and provides responsive acceleration, particularly in the mid-range where all the torque is produced. It feels as if you can lunge for a gap in the traffic while rolling along without too much effort.

Off-idle response is not as forceful, and the dreaded turbo-lag is the culprit. Mind you, such is the response from 1500rpm that the off-idle behaviour is magnified. It is not that the turbo lag produces a seemingly eternal delay, rather that the contrast between off-boost and boost is quite sharp.

Stretching the V6 towards its redline is a turbine-smooth experience, though it hardly seems worth the effort given the enormous torque available lower down the RPM scale.

Helping the V6 to send its horsepower down the line is the seven-speed auto. This is a smooth, clever transmission that senses when you are slowing and downshifts relatively early. This means you can rely on engine braking downhill, and while this characteristic is not new in modern transmissions, there are very few that do it as seamlessly as the Navara.

The only sore point with this engine is the surprisingly short service schedule Nissan Australia has specified for it: a 5000km maximum distance between oil changes comes as a surprise in this day of high-quality oils, cleaner burning engines and extended oil-change intervals. 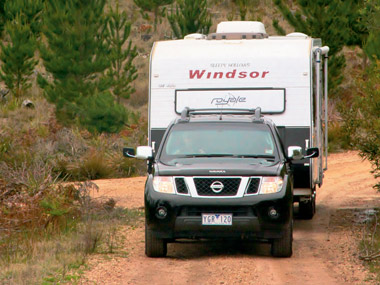 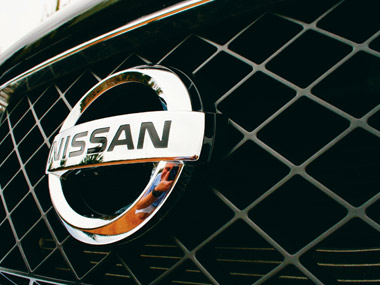 There are no surprises here – this is the traditional Navara coil-spring independent front suspension and leaf spring, live-axle rear suspension. The way the Navara negotiates bumps on the road is the commercial ute norm – a less than subtle shove up and down as the big holes and mounds are negotiated. Admittedly, this is not objectionable to most, and there are few utes that can mask the rough ride any better than the Navara, but if you’re stepping into a Navara from a car or a (recent) SUV wagon, you might be a bit shocked. Try before you buy.

Handling is a bit basic, too. This is a long-wheelbase truck on a simple suspension, and it’s a heavy one. Again, this is not unusual for the ute class, but if you like the direct response of most cars, a rig like this is probably not for you.

Fuel consumption in powerful, large-displacement diesels can often be disappointing, but Nissan handles the relatively small displacement quite well.

After averaging 15.2L/100km while towing a tandem-axle 2000kg caravan, the Navara dropped to around 11L/100km driving solo along the bitumen.

The turbo lag we experienced evaporated with the tandem-axle full-size van hitched up. It’s as if the transmission allows a fraction more slip and the engine is on boost sooner.

Whatever the explanation, the Navara takes off assertively and belts up to 100km/h without any indication it’s struggling. In fact, you have to remind yourself there’s a van behind.

That smooth seven-speed auto also makes good use of the 3L’s excellent engine braking, so downhill runs barely need more than a brush over the brake pedal.

Stability can vary according to vehicle and van used, but this combination was a sweet one – the whole rig felt planted. The caravan had a surprisingly low stated ball mass of 113kg, but it certainly didn’t make the rear suspension sag, or seriously affect stability.

Nothing beats a solid wedge of torque for easy towing. Here the Navara ST-X 550 works as well as you would expect, giving caravanners access to a ute with easy, relaxed and relatively economical towing capability.

However, a ute is not what all expect it to be in terms of ride comfort, and for $61,000 the ST-X 550 lacks luxuries you might expect, and the short service intervals will add to running costs.