AUSTRALIANS LIKE BIG caravans and it takes a strong, capable, broad shouldered vehicle to tow them. Like many US brands, Jeep builds its medium and large 4WD wagons with hauling in mind. Americans, it would seem, love to tow, too.

Introduced early this year, the new Grand Cherokee is the fourth generation of luxury Jeeps to land on our shores. The manufacturer first introduced the WG Grand Cherokee in 1996 as a luxurious addition to its Cherokee range.

Showing the globalisation (and fickle nature) of today’s automotive industry, the Grand Cherokee shares its platform with the Mercedes-Benz ML-Class, a deal conceived when Chrysler (Jeep) and Daimler (Mercedes-Benz) were the same company. After the global financial crisis nearly killed Chrysler off, the company was saved at the last minute by the Italian firm Fiat.

The Limited has a generous features bundle. Aside from the inclusions you’d expect at the start of the luxury end of the SUV market, such as climate control air-conditioning, power windows and mirrors, cruise control, alloy wheels, ABS brakes with EBD and traction and stability control, this unit also features a sophisticated offroad program, air suspension, glass sunroof, leather seats (powered and heated at the front), heated leather-wrapped steering wheel, power lift tailgate, Bi-xenon headlights, fog lights and a tow/haul feature which unlocks the transmission’s torque converter at the push of the button.

The interior is imbued with a contemporary feel and, at least on the surface, a sense of quality. The controls are easy to find and once you become familiar with quirks like the left-hand indicator stalk, it’s very straightforward. The central information display is very good, with a simple, clear menu of information bites that are easy to choose with the steering wheel controls. Likewise, the audio controls use rocker switches fitted to the back of the steering wheel, which is a carry-over idea from the WJ Grand Cherokee – and an excellent feature.

The seats are very comfortable and rear passengers get ample room, although their seat is a little flat. The cargo area has nice chrome protection strips and, with the exception for the fairly high loading lip, is a convenient space to load.

The driver does not get a left foot rest and the footwell itself is a tight space – this has been an ongoing Jeep issue since the XJ Cherokee in 1994. While the company has an investment in right-hand-drive markets, it doesn’t extend to floorpan modularity to accommodate big-booted right-hand drivers.

The exterior design is squared-off and chunky, much like others in the Jeep range, but it comes at a cost. Vision out of the sides and rear of the cabin is poor, but at least there are parking sensors and a rear-view camera to assist proceedings.

The old American V8 might be known as a torquey, lazy revver, but this 5.7L doesn’t quite fit the cliché. It feels a bit highly strung, with an eagerness to rev up to the redline and deliver power all the way there. It also sounds more cammy than guttural.

When driving the unladen Jeep, response is good and there will be few complaints about the way it bustles along if you’re in a hurry. Yet for the Grand Cherokee’s overall size, and the 5.7L of V8 pushing it along, you might expect more get up and go.

The five-speed automatic transmission does a great job of translating all that engine action into motion. Its gearshifts are as smooth as silk and if you’re so inclined, manual shifting is a doddle – great for making use of the engine braking on those long, steep descents. 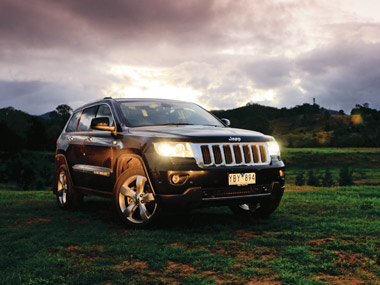 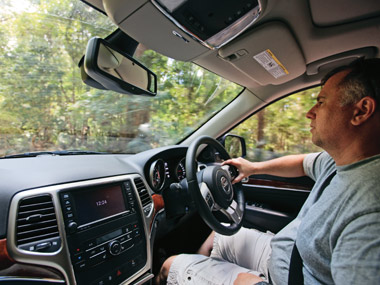 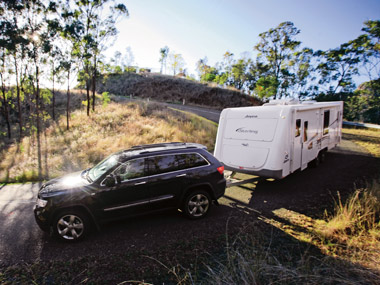 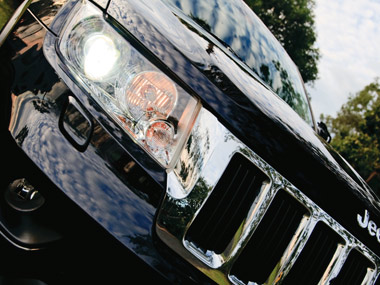 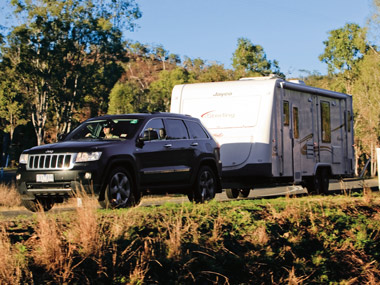 The Jeep’s all-independent air-spring suspension is a very well-tuned system for some high speed touring, with exceptional stability and a very high degree of composure over undulating, high speed roads.

Cornering is reasonably well contained and steering feel is much better than with Jeeps of the past.

The air suspension doesn’t, however, feel so supple when raised into one of the two higher offroad settings. While this allows the under-body clearance you need on high-crowned roads, or when heading offroad, it also makes the ride feel comparatively brittle and causes the suspension to top-out all too easily.

As they say, you can’t make an omelette without breaking a few eggs. And so too, you can’t drive a petrol V8 without expecting it to suck down fuel at a great rate. The Jeep obliges, but not as much as you might expect.

Driving along freeways lightly laden you can expect fuel consumption to average around 11L/100km, but add some hilly terrain and it’ll climb to around 13L/100km.

However, the big V8’s consumption slides off the charts when hill climbing and trying for a cruising speed of 95-100km/h.

Although the Jeep has air suspension to level the ride height, it still benefited from the use of load levers. These are a must, especially with the ball loads we were coupling up with.

The Jeep handled the 2500kg caravan with relish. While you certainly notice the load, the Jeep really could still get up and go very well once rolling, and easily cruised around 90-100km/h.

The trip computer means you are able to read temperature sensors for engine and transmission oil. And it’s very instructive: while ambient temperature was relatively mild at about 25°C, a long hill climb would see transmission temperature rise by no more than 15°C from normal, and nowhere near a dangerous temperature.

Jeep has come a long way since the old school and unsophisticated WG Grand Cherokee. This is Jeep’s pinnacle model range, and it feels as if this brand ambassador is finally going to give the company the profile it needs.

The Grand Cherokee Limited V8 performs well and is a comfortable tow tug. Yes, it’s thirsty when under tow, but not as much as you might expect, and there is always the diesel model if frugality is a concern.

For more information about the Jeep Grand Cherokee, visit www.jeep.com.au