Volkswagen dabbled with 4WDs in its very early years, with Beetle variants made during and just after WWII built with some rougher road abilities. A utility version of the Transporter was born in the 1950s, and continues today. Though the Amarok is the first Volkswagen dual cab ute of its own, the company did market a re-badged Toyota HiLux in the 1990s, called the Volkswagen Taro. 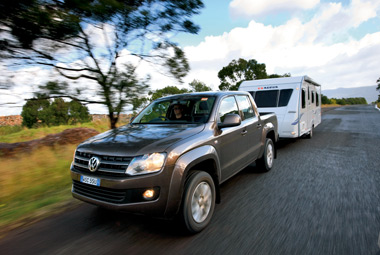 The Amarok is only available in dual cab form with manual transmission until 2012, when automatic derivatives and single cab versions become available.

We tested the Amarok TDi400 Trendline, which is the second-tier model after the base model Amarok 4WD. All told, the range includes an entry level rear-wheel-drive and 4WD, plus two upper-spec 4WD versions: the Highline and the top-of-the-line Ultimate.

The Amarok’s cabin is large for a dual cab, offering plenty of head, shoulder and leg room for four adults. Even the rear bench is suitable for three adults, with the flat bench not as supportive as more sculpted seats, yet affording the centre occupant more comfort than usual. A side benefit is that booster or child seats can easily be fitted three across – one of the few passenger vehicles on the market that can achieve this so comfortably.

The TDI400 2L diesel is fitted with two sequential turbochargers, which is a relatively new practice in turbodiesels. The theoretical benefit is a more consistent throttle response and having peak torque available even lower in the rev range.

And so it proves in practice. This engine is a cracker, pulling away from idle in higher gears with little hesitation, and as the tachometer needle swings in its arc towards redline the lack of bumps and dips in the torque delivery is very unlike any of the Amarok’s competitors.

You begin to expect turbo lag in a turbodiesel engine, but the Amarok has relatively little of it. However, it is not particularly strong right from idle on take off. You still need to allow for the initial dip in acceleration if you’re trying to make a gap at an intersection, for example, but beyond that it delivers a steady stream of torque.

Though the diesel is the sophisticate in power delivery among its peers, it has no such grace with its gruff engine – it isn’t as noisy as diesels of old, but it won’t ingratiate with its whispery charms, either.

It isn’t an engine worth revving for power, either. That may sound like an obvious statement when talking about a diesel engine, but trust me, when you drive it, it isn’t so obvious. You almost expect it to rev out like a smooth, multi-valve petrol V8, such is its lower RPM response.

The six-speed manual gearbox is light and positive, and the same can be said of the clutch. Even though Volkswagen has put off some buyers looking for an automatic, it at least offers a quality manual transmission.

With all but a couple of 1t utes using leaf-spring live axle rear suspension, which is better known for load carrying than comfort, it’s no wonder they are not lush riding vehicles. Some are harsher than others, but none can help but betray their commercial origins.

The Amarok is one of the few that appears to be a competent load carrier, while also riding well with the tray empty. It is by no means a luxury saloon, but it is a lot better than you would expect, especially considering the test vehicle was shod with optional 18in wheels (rather than the standard 16in). The only criticism is that the independent front end can wallow when driving over bumps at speed.

The Amarok handles well, albeit with the ultimately dull-feeling steering typical of the class. Its cornering attitude is flat and it grips well. And while the steering does not convey much feedback, it is responsive to input.

The Amarok will easily slip to less than 10L/100km when driving on the open road without a caravan behind. When driving with the 1400kg caravan hitched-up on test, the Amarok drank down 11.5L/100km.

One of the most impressive aspects of the Amarok’s engine is its stubbornness: it never gives up. Let its revs drop to idle speed while rolling around a roundabout, and instead of the embarrassing lurching and quick search for a lower gear, it just steadily pulls its weight – and the van’s – cleanly away, its low-blow turbo whistling while it works. Very nice.

The chassis took on the relatively light caravan with no problems. There was some fore-aft pitching, but the Amarok otherwise towed the single axle van as if it wasn’t there.

We would have preferred to test a heavier van, but unfortunately an Amarok with an electric brake controller was not available on the press fleet. We chose an Adria due to the fact it had hydraulic brakes.

As the old saying goes, there is no substitute for cubic inches. I used to think this was a given for towing, but the little 2L Amarok has changed my thinking. Yes, a heavier van would have been preferable, but no other four-cylinder turbodiesel I have tested with similar weight behind has taken to the task with such relish.

Some are quicker, and some more economical, but none make it seem as effortless as the Amarok. Tie that with a spacious, high quality cabin, agile chassis and respectable offroad ability and you have one of the best dual cab utes to date.