As a manufacturer, Jurgens has carved out a unique niche in the Australian industry, mostly because of the parent company's South African origins. It also stands out from the crowd because of its vans’ distinctive Euro flavour. 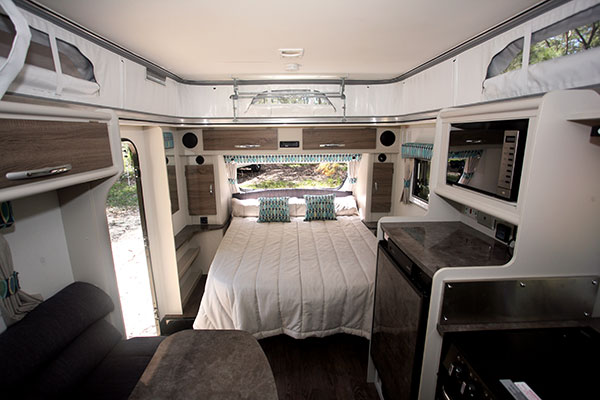 Unlike most pop top caravans, the Jindabyne does not have external roof clips. Consequently the only thing to do once the van is level and the corner stabilisers wound down, is to set the awning to the ‘open" position and to raise the roof at both ends from the inside using the pop-top lifters. Once that is done, the awning can be fully wound out and doors and windows opened.

With the roof raised, there's a general internal height of 1.98m (6ft 6in). Not all pop top caravans have ensuite facilities but this one does, across the rear of the van. It also comes with a front island bed, nearside lounge and an offside kitchen.

One of the benefits of the Jindabyne is that it's a snack of a van to tow. Fully loaded, it's only 1730kg and the Ford Ranger I was using dealt with the van like it wasn’t there. In fact this is an ideal van for something like the Ranger.

Stay tuned for the full review coming next month in Caravan World #565. Subscribe today for the latest caravan reviews and news every month!