The 600th motorhome was a Horizon Grevillea, sold to John and Lynette Andersen of Hervey Bay, Qld, who were blown away when they arrived to collect their motorhome from Ballina Campervan & Motorhome Centre – Horizon’s sole dealer – and were announced as the 600th owner of a new Horizon motorhome and presented with a bottle of champagne and a certificate.

The Andersens said they were after a practical motorhome, with ample living space and enough height for John, who is 6ft 1in tall.

The couple have been travelling in a caravan for many years and decided to convert to a motorhome for the ease and convenience it provided. They spent more than two years researching brands, talking to owners, attending shows and eventually settled on Horizon Motorhomes. 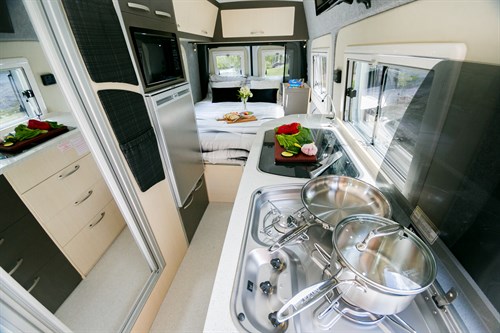 Horizon Motorhomes was started in the early 1990s when founder and owner Clayton Kearney turned his love of motors and travelling into a career, and it was the beginning of a long quest to design the perfect motorhome.

The handover of his 600th new motorhome was an emotional moment for Kearney and caps a huge few years for the business which celebrated its 21st anniversary last year, and won Motorhome Manufacturer of the Year (CCIA NSW) in 2015 and 2016, among other awards.

“We are excited to see what 2017 will bring us, as we ramp up production capabilities in our new service and manufacturing site and look forward to the sale of our 700th motorhome,” Kearney said.

There are currently eight models in the Horizon range, built into the Fiat Ducato and Mercedes Benz Sprinter base vehicles.