Exactly 200 vans gathered for a week of good company, happy hours and activities as part of the 10th National Muster of the Australian Caravan Club.

Held at the Shepparton Showgrounds, Vic, and facilitated by the Shepparton Agricultural Society, this year’s muster saw a changing of the guard, with long-time chairman Tom Smith stepping down from the role and deputy chairman Craig Humphrey stepping up.

The muster was opened by Wendy Lovell, Northern Victoria Region MP, who later reported this to the Victorian state parliament:  “It is estimated that the muster contributed about $250,000 to our local economy, which is fantastic. I was delighted to outline Shepparton's tourism attractions and day trip opportunities to club members and have extended Shepparton's hospitality to them whenever they would like to return." 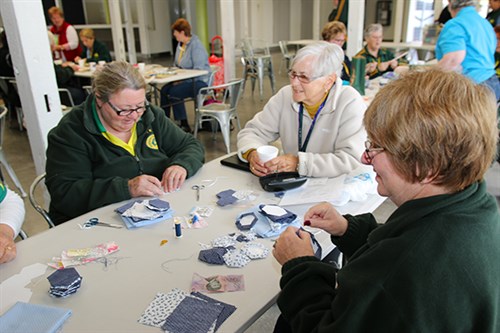 Despite its name, the Australian Caravan Club welcomes RVs of all types. Though it started in September 2006 as a club of caravan owners, in 2011 the constitution was amended to allow owners of all RVs, including motorhomes and fifth wheelers, to join. As a national body, the ACC also speaks on issues facing RVers around the country. It has branches in every state of the country and 4000 members.

The highlight of the muster was the Black and White Dinner Dance on the Saturday night, with dancing music supplied by talented ACC member Vince Pagett and his band.