CMCA Members Have A Capital Time At National Rally

The rally, under the direction of Rally Manager Cathy Lee, was located a mere 10 minutes from Parliament House at Exhibition Park.

The rally was an organiser’s dream, with much of the necessary infrastructure such as conference rooms, amenities blocks and undercover trade areas already in place.

For the rally goer, it was an excellent time to visit Canberra. The spectacular Floriade was happening with colourful displays everywhere and an added attraction at Exhibition Park was the weekly Farmer’s Market where all kinds of fresh fruit and vegetables were on offer. Not to mention the pie man with every taste known to mankind available in a pie! 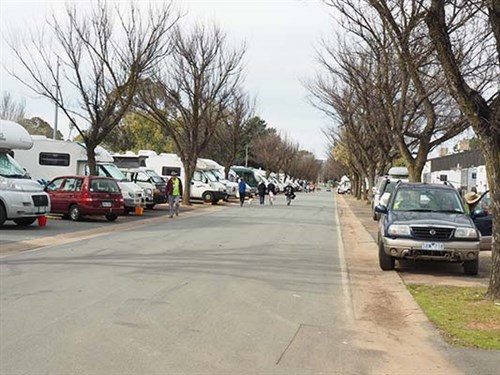 Canberra is, of course, well known for its bicycle tracks and more than one motorhomer was seen heading off to stretch the legs around Lake Burley Griffin.

While rally organisers were expecting around 900 motorhomes and even a few caravans to attend, flooding and bad weather in the southern regions, unfortunately, meant more than a few RVers had to cancel their plans. However, all those who did attend settled in for what appeared to be a very fine time, catching up old friends and making new ones – there were also plenty of ‘first timers’ there which welcomed that opportunity.

While I only had a few days at the rally, it was enough to get around and say hello to some old friends, in particular Erica Whitworth who, with her late husband Don, were the founders of the CMCA.