A Brisbane manufacturer is making waves in the traditional caravan industry with the retro-style Gidget Noosa teardrop camper.

Referencing the early 60s series of films and musicals by the same name, Gidget campers also reference that era with their vintage retro shape and surf-themed model names – Noosa, Bells, and Bondi to start with.

All Gidget campers are designed and built in Australia for Australian touring conditions – there’s even an offroad model (the Brumby) and slide-out models. 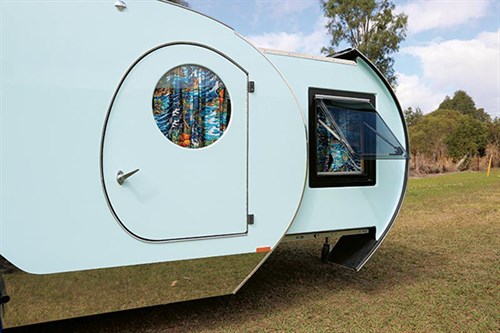 They are extremely lightweight, the Noosa, for example has a Tare weight of just 755kg.

Adding to the Noosa’s appeal is its front slide-out bed and almost full-size kitchen fitted in the rear.

The Noosa is well set up electrically, with a 100Ah battery, a 110W solar panel plus a 2000W inverter, full LED lighting, and a flatscreen TV. It also has a 105L water tank and a 40L grey water tank – something you don’t find even in most full-size caravans.