Euro Caravans is the new kid on the block down under and the Polish manufacturer has debuted with all cylinders firing.

With three models making their way to Aussie dealerships, Euro Caravans is set to make a splash, the biggest of which will come from the new NR Freedom.

With an external body length of just 3.75m and a Tare weight of just 870kg, the Freedom might shock enthusiasts who are used to classic caravans, as the weight of this little beauty is lighter than many camper trailers! 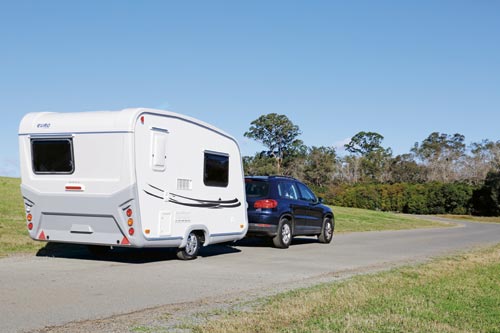 Despite being small in stature and light in weight, the NR Freedom packs a whole lot into a smaller package.

Inside, the Freedom offers a simple layout with a small kitchen bench and offside bathroom on one end and a typical British arrangement of a club style lounge that converts into a bed at the other.

With plenty of room for two, the minimalist design of the interior coupled with the ultra light fiberglass that makes up most of the roof and walls means that the 1300kg of caravan is barely noticeable, which means it can be towed by a huge range of tow vehicles.

Defying its own stature, the conventional boot is surprisingly large and the kitchen bench is just long enough for a round stainless steel sink and a three-burner cooktop.

There is more storage than you’d expect in this little van but that comes at the expense of a small fridge and no cooking alternative to the cooktop.

The size of this Caravan makes it a dream to manoeuvre, with an unladen ball weight of just 45kg and a very impressive load capacity of 430kg.

Sacrificing a shower for size you’d be right in saying that everything about this NR Freedom caravan is small, and sized well below the average Australian caravan. But this isn’t a bad proposition.

Given the size and the ability to manoeuvre of this European nipper, owners would likely get the greatest use out of more urban areas with a wealth of overnight stops in caravan parks, so as to not require some of the on-board facilities many caravan owners might be used to.