Bonetti Campers might not be a name quite so well known in the RV fraternity, but proprietor Stefano Bonetti is certainly familiar among motorhome travellers, particularly owners of ex KEA motorhomes.

The reason for that is that previously, Bonetti was the National Fleet Operations Manager at KEA Campers. Along with his training as a Master Motor Mechanic in Switzerland, this gave him a considerable amount of experience in motorhome repair and maintenance, which is something that Bonetti uses extensively in his current motorhome servicing business. 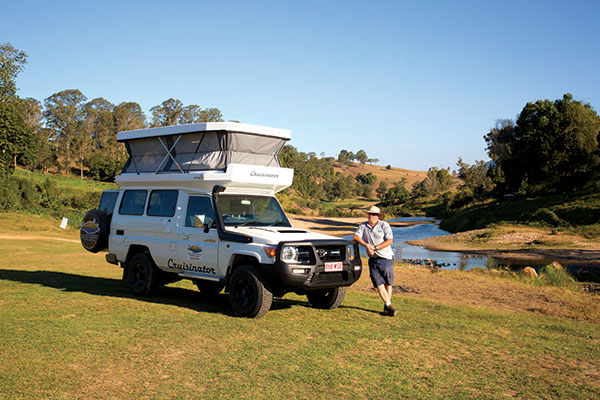 That same experience has also been used to build a seriously good offroad campervan known as the Cruisinator. Bonetti is a keen offroad explorer himself, which is always handy when designing any motorhome or campervan.

Based on a Toyota Land Cruiser 70 Series, the Cruisinator bears more than a passing resemblance to a KEA Conqueror, an offroad camper produced by the then KEA Campers (Australia) which ceased production about five or six years ago. Bonetti used the original design as a basis for his Cruisinator, but made a considerable number of changes and improvements in the design process.

Starting with the vehicle, the camper conversion is based on a Landcruiser 70 series, the Troop Carrier, aka the Troopie. Okay, so it doesn’t offer quite the comfort levels of a 200 Series but it’s cheaper and a real offroad vehicle. It’s a driver’s vehicle too – the 4.5L turbo diesel is mated to a five speed manual gearbox. That’s the only drivetrain choice. Since I quite like driving a manual, I didn’t have any problems with that at all. Indeed the turbo diesel rumbles along in a very reassuring manner, delivering the necessary grunt.

The essence of the camper conversion is that part of the original roof is removed and a new fibreglass framework for the base and a lid with an insulated sandwich structure added. The basic roof conversion includes a slide-out bed, mattresses, scissors, gas lifters and gusset complete with windows. Being a little wider than the original roofline does give the Cruisinator a slightly top heavy look. However, I’d have to say on my test drive, that’s very deceptive because as far as I could tell it really did not change the vehicle handling at all. Indeed the roof conversion gives the 70 Series a very distinctive look. Undoubtedly what spoils the vehicle profile is the optional Foxwing awning on the passenger side. Although having opened it several times on my own, its advantages clearly outweigh anything in the looks department, and it is an option chosen by the buyer.

With a GVM of 3300kg and a Tare of 2800kg, the Cruisinator comes in with a good load capacity of 500kg. In case that is not enough, then there’s a possible optional upgrade to 3900kg. However, I am thinking that unless some serious towing is planned, then the 500kg should be more than adequate.

An advantage of this style of camper is that setting up takes minimal time. Once the corner straps are undone, the roof can be lifted from the inside. That does require a little bit of effort but the average person should be able to handle that without too much trouble. Once the roof is in position, it’s a matter of opening the windows and pegging out the Foxwing awning. About the only other setup item is to remove the Origo methylated spirits cooker from its drawer (adjacent to the rear doors) and set it up on its purpose fitted hinged shelf – cooking is al fresco.

A finite space does demand a bit of creativity with an interior layout. This one comes with a wardrobe and kitchen bench height cabinet down the offside and bench seating down the nearside and behind the passenger seat. A folding table is also fitted in towards the front and will seat two without any problems.  All the cabinetry is built from CNC machined laminated lightweight plywood and the kitchen drawers have metal sides.

Just in case you are wondering where the bed is, it’s built into the above cab area, just like the luton in a conventional motorhome. It’s not an east-west setup though, because when required the bed base extends into the rear area, meaning a bed size of 2.1m x 1.45m (6ft 11in x 4ft 9in). Everything else might be a bit compressed in this layout but the bed certainly is not. Clambering into bed does require a bit of dexterity but the bench seating and kitchen bench top make for good steps.

Surprisingly, there is a fair amount of bench top area even with the stainless steel sink. That’s mostly because the cooker is designed to be used outside, but of course being portable can be used inside as well.

For a relatively simple campervan, the Cruisinator can have a very sophisticated electrical system. LED strip lights are fitted with abandon, so there’s no shortage of light choices which have dimmers and can have remote control operation as well.

A conventional 100AH AGM battery is standard but there’s an option for a Lavi EZA 80AH lithium battery system that includes monitoring by a remote tablet or Android phone APP. In addition, a roof mounted Solbian CP 140W solar panel can be fitted.

General storage is well accommodated for with the kitchen bench having seven drawers and a cupboard. There is of course space under the seating but if you have a fridge/freezer on board and say a Porta Potti, then much of that area is accounted for.

That’s not all though, there is the previously mentioned wardrobe and a secret space (not immediately obvious) between the driver’s cab roof and the bed base, which you can lift up and be used for bedding or other purposes. Finally, a nice touch are the little pockets that run around the base of the rear roof area. Enclosed by zipped canvas, they are useful for all kinds of small items, the only problem being to remember where everything is hidden.

Clearly this style of camper isn’t for everyone but if offroad exploration is the goal in a fully self-contained vehicle that isn’t too large, then the Bonetti Cruisinator is a winner. The Land Cruiser supplies the 4WD ability and the Bonetti conversion does the rest for a great camper designed for (relatively) light weight travel in all kinds of road conditions.

Price as shown (on road, Qld)