In what I imagine was a price-related decision, Jayco opted for the Toyota Hiace as the base vehicle of choice for this model. You get a couple of options here from Jayco – petrol and manual gearbox as standard, or the optional diesel with four-speed automatic gearbox, although the Hiace is actually available in any combination. That was a slight dilemma for me, being a diesel person but with a preference for manual gearboxes – and it poses the reverse problem for those who would like a petrol engine and the ease of an automatic. In any case, my review Freedom campervan came with the optional diesel and auto combination.

Converting the van itself is basically a matter of cutting a large hole in the Hiace roof for the pop-top, and smaller holes in the side for items like the gas cylinder bin and water fillers. There isn’t any external storage, but the under-bed area at the rear does offer space for camping basics like hoses, power leads and camp chairs. Anything water-related is best kept stored in a dedicated plastic box.

Both the rear windows can be opened and both have insect screens. But on a warm night, there would be a temptation to leave the rear door open, so that would need either an insect screen or something larger that goes around the tailgate. 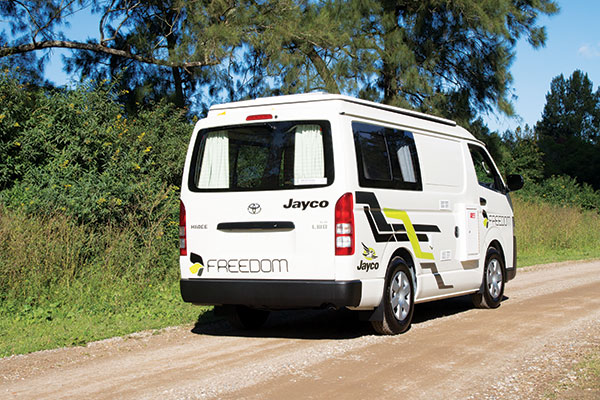 A water heater isn’t a standard fitting here but, given the space constraints and the lack of a bathroom, it’s probably better just to boil the kettle for washing up. Space might be a bit limiting but the load capacity sure isn’t – with a Tare weight of 2206kg and a GVM of 2800kg, the payload of 594kg is something that many caravan manufacturers only dream about.

The interior space of the Hiace does limit the number of alternative layouts that are available (compared to a VW van) – even more so because the passenger cab seats cannot be used for anything other than driving. Jayco’s Freedom has two layouts – one with a bed seat in the rear (to carry a third passenger) and this model, which has a sort of U-shaped lounge in the rear with a table in the middle. With seating capacity for four people, Jayco feels this is perfect for families to enter the campervan market, with the vehicle working as a both a family car and a getaway campervan. Being swivel mounted, the table can be removed and used to form a double bed in the rear of the van. The front area (common to both layouts) has an L-shaped kitchen bench behind the cab seats and partly down the side of the van. A rare addition in pop-top campervans is the marine-style roof hatch. It’s great with the roof raised but it’s also equally good if you’re stopped for a quick meal break – okay, you have to duck your head but the roof does not have to be raised.

Setting up the campervan is quite simple – the pop-top roof is held down by internal straps and, once they are released, it’s a matter of lifting the roof and opening the upper windows. That is about it for the basics. With this layout the table is already in position, so there’s no problem with immediately sitting down for a meal.

Camping at this level really gets down to basics and that is what the kitchen is all about. There is a two-burner cooktop and a stainless sink with drainer. The cooker sits to the right of the sink, so there’s room to stack the dirty dishes before washing up. But if you don’t option the hot water heater, you would have to boil water first on the cooker, unless you have mains power hooked up. That would also mean that the microwave oven that sits above the 85L fridge could also be used.

There are three cupboards, two larger ones and a smaller one that looked like it contained a wire basket slide-out but had three shelves instead. Shelves are always a good way to use all available space effectively in a small space like this.

The table is a bit of an odd shape but that is because it’s a bed base component as well. However, it is large enough for two people to eat without feeling like they are on top of each other. In fact, given the almost club-like seating, you could seat three at a pinch. Having a single leg means the table can be swivelled around easily and, being relatively small, it is quite stable. It also means it can be lifted out of the way, either for lounging around or making up the bed.

There’s no avoiding making up the bed every night here, unless it’s left made up all the time. But it’s quite simple to put the table down and fit the relevant cushions in. The resultant bed has an odd shape but will accommodate sleepers of different heights (1.87m – 1.7m/6ft 2in – 5ft 6in).

The Jayco Freedom is designed for basic, lightweight and budget camping. On those fronts, it scores well.

The Hiace doesn’t quite come up to VW powered campervans on many levels, but it wins in the budget department. It’s a great little around-town traveller but will do equally well on the lightweight touring circuit.