In the motorhome world, large van converters have cut themselves a decent niche in the market. Most of the more successful designs come from manufacturers who either only build van conversions or they form a fair chunk of their motorhome range.

Well-known motorhome manufacturer Trakka is in the latter category and uses both Fiat Ducatos and Mercedes-Benz Sprinters for its van-based motorhomes. The Sprinters are used for the Jabiru range which comes with a variety of power, seat and weight ratings – 316, 319 and 419, as well the 519 4X4 model for the adventurous. 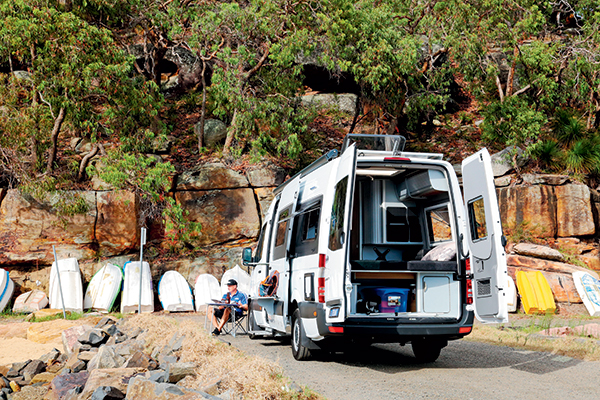 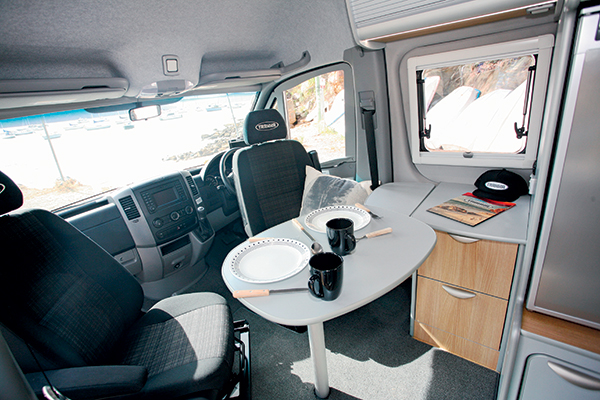 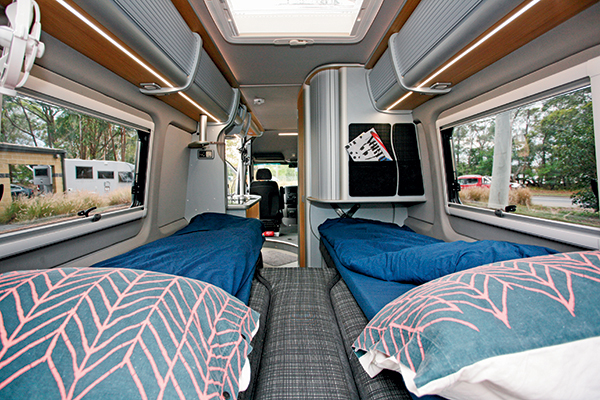 For this review, I opted for the middle of the range, a Jabiru 319 CDI-based van fitted with Trakka’s Remote Pack. Like any Trakka product, it was sparkling clean and ready to go when I drove into its premises early in the morning – something I much appreciated given the degenerating weather forecast!

Breaking down the jargon, the Sprinter 319 CDI-based Jabiru has a Tare weight of 3300kg and a GVM of 3880kg, giving it a decent payload of 580kg. It’s fitted with the Benz 3L turbodiesel that delivers 140kW (190hp) and a very torquey 360Nm. The original Sprinter van might be white but Trakka leaves no doubt about the conversion that has been done. Adding greatly to the look of the Jabiru are the upper panels and window surrounds that are blacked in.

There are all the items you’d expect in a conversion like the Seitz double-glazed windows, Fiamma awning, toilet cassette door and roof-mounted solar panels. The 240V power lead is mounted on a purpose-built holder on one bin door, which is an unusual location.

In this particular Jabiru, there are no gas cylinders as a diesel-powered cooker and heater are fitted, and the fridge is a 12V compressor. They are all part of Trakka’s Remote Pack, which also includes solar panels and a thermal and sound insulation package which rates a mention because it cannot be seen. Included in the package is a side door insect screen but it wasn’t fitted to our review vehicle.

The interior of the Jabiru is a reminder that many of the Trakka designs don’t have new layouts but one that is a result of ongoing improvements and refinement. There are actually two basic Jabiru layouts: the Xtra that has passenger seats behind the driver’s seat, and this one that just has the driver’s cab for seating.

Both the cab seats can be swivelled around to form up a small lounge/dining zone. Filling the nearside wall is the bench, which has everything kitchen related except for the 136L fridge on the opposite side. Trakka’s uniquely designed bathroom sits mid offside, leaving the rear for the bedroom. Although it looks like a single-bed layout, it’s a bit more flexible than that.

The interior colour scheme is done in the usual Trakka style, with various shades of grey and the faux timber look used for the cabinetry. It’s a relatively confined space but the large windows compensate nicely.

OK, so it doesn’t suit everybody but there’s no doubt that in a van like this, two single beds work well. However, there are variations on a theme here. The 2.05m (6ft 9in) mattresses are not rectangular in shape, but wider at the head of the bed than the foot. A mattress insert between the two means that for a couple it’s a semi-double bed, if you understand that logic. On the other hand, the insert can be taken out for two people who don’t want to share the same bed. So everybody wins!

Trakka has designed a portable bedside cabinet that sits in between the two beds. Finally, a full double can be made up if desired – it’s all very flexible.

Trakka bathrooms aren’t usually just a white moulded box and this one isn’t either. Well, some of it is but the towel rails, window and vanity cabinet with wall mirrors give it some style. The shower hose extends out of the washbasin when bath time comes around. Also fitted into the bathroom is Trakka’s patented retractable cassette toilet; when it’s not needed, it hides under the washbasin, but when required a flick of the switch powers it out. It’s a neat little space-saving device and emptying it is quite easily done when the toilet is in the ‘away’ position. I think it’s best left in the ‘out’ position overnight, though.

Probably the most obvious feature in the kitchen bench is the diesel-powered cooktop, because it looks nothing like the more conventional gas cooker. It adjoins a round stainless sink and small benchtop garbage bin. At the forward end of the bench the pole mounting looks a bit like it’s holding up the roof, but actually it’s not only a handy grab pole but also a TV mounting point so that the TV can be seen easily from both inside and outside.

General storage space in the kitchen bench is practical, with a good selection of drawers, an overhead locker and roller shutter-enclosed cupboard space. One overhead locker contains the very functional control centre with the 12V electric, Webasto diesel cooker and Truma water heater panels. The partition below the electrical control panel is fitted with both 12V and 5V USB charger outlets and a 240V double powerpoint.

Although Trakka doesn’t only do large van conversions, it’s clearly one of its specialities.

The Jabiru demonstrates that well, with a number of tried and tested features, along with several new innovations.

Even though the Sprinter van offers a fixed space, Trakka has built some flexibility into the design with features such as the layout of the rear beds, the choice of diesel or LPG-powered cooking, as well as an alternative layout.

In short, this Trakka Jabiru conversion has a lot to offer both singles and couples alike!

You can find the full review in Caravan World #561. Subscribe today for the latest caravan reviews and news every month!