Four-wheel drive rigs are pretty scarce in the world of motorhomes. There are a couple of reasons for that – one is that the necessary base vehicles are either not available or are very expensive; and the second reason is that building a true offroad motorhome is costly.

A third problem occurs if the manufacturer uses something like a Toyota HiLux SR 4X4 cab chassis which, in its factory delivered form, has a GVM of 3000kg. If you take this Explorer Vision motorhome as an example, it has a Tare weight of 2750kg, which would allow for a load carrying capacity of just 250kg in the HiLux’s factory form.

However, Explorer Motorhomes has developed a legally-modified HiLux chassis that increases the GVM to 3500kg, resulting in a much more practical load capacity. The suspension modification includes new rear springs, rear shock absorbers, front struts and front shock absorbers. Not only does that improve the load carrying capacity but it also improves the general road handling of the motorhome, which suffers a bit from sideways motion due to its taller height and narrower build. 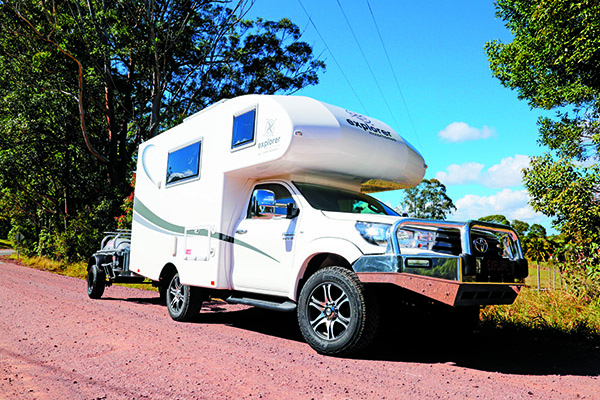 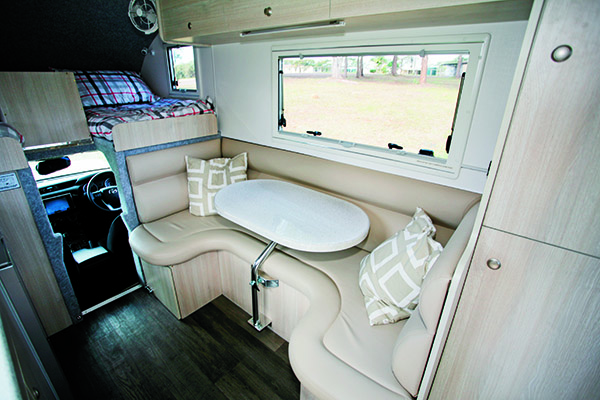 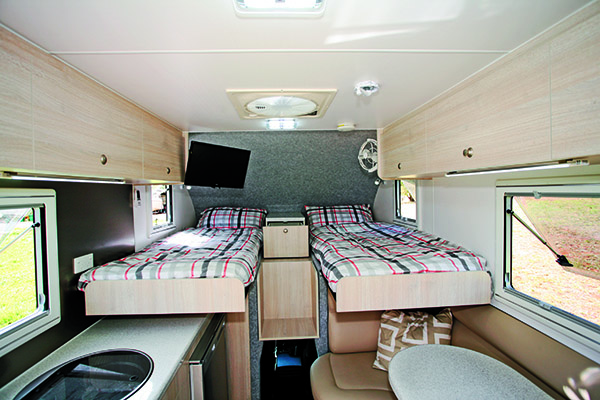 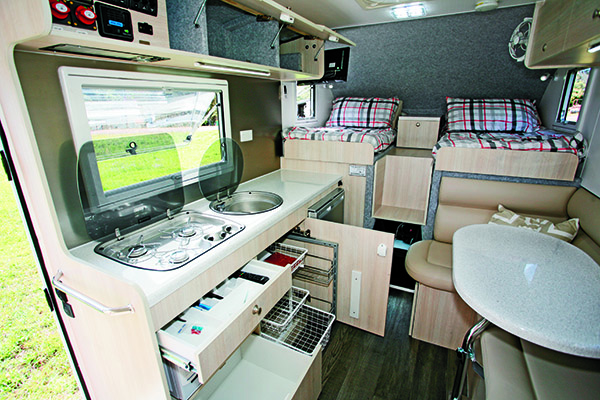 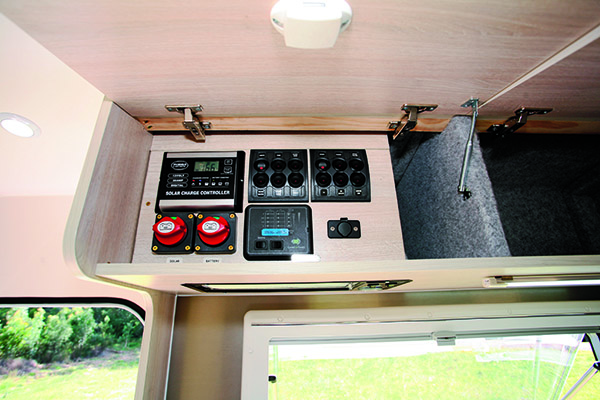 The HiLux will be familiar to many and the SR 4X4 version comes with a 2.8L turbodiesel that delivers a maximum power output of 130kW and 450Nm of torque through a six-speed fully automated gearbox. On my little trek along Queensland’s Bruce Highway and some dirt roads in the Sunshine Coast hinterland, it delivered in the power department. However, if you want a few more kilowatts and a bit more torquey grunt, the Vision is also available on a Ford Ranger cab chassis. It’s worth mentioning here that Clearview replacement rear vision mirrors are fitted as a standard feature to this motorhome. The Clearview’s are a winner in my eyes, not only because they’re very practical to use but because they look like they are part of the original vehicle.

Whichever chassis is used, the motorhome bodywork and interior remains the same.  Externally, the Explorer Vision’s body comes with a five-year structural warranty and is fully-moulded fibreglass – the one-piece moulding giving the advantages of a good strength-to-weight ratio, as well as a seamless body, thus minimising water leaks. Windows are Dometic/Seitz acrylics and the door has a security screen.

Something that’s not always seen as an asset with RVs but, in this case, should be seen that way, is the Vision’s narrower body width of 2.18m (7ft 2in). That is, without a doubt, ahandy feature to have when offroading on narrow bush tracks.

Given the upgraded load capacity and its small relative size, the Vision is quite well set up for external storage capacity with two bins, one on top of the other at the rear left-hand corner. It’s certainly an improvement over other motorhomes of this size, which often have no external storage bins, apart from those required for the toilet cassette and gas cylinders. On that subject, the cassette toilet has a SOG ventilation system is on the rear wall, and, along the right-hand side, the gas bin contains two 4kg cylinders.

The design of HiLux-based motorhomes usually requires an east-west bed over the driver’s cab and the difficulties of clambering in and out of the luton bed can be an issue for some travellers. Explorer has developed a very effective alternative, using north-south single beds over the driver’s cab instead.

This Vision motorhome also has a three-quarter bathroom across the rear, a nearside kitchen bench and a club lounge/dinette on the opposite side. Although the interior isn’t particularly spacious, the light colour scheme and large window creates a pleasant ambience. Ventilation is handled by a Fiamma ceiling fan or a roof-mounted Dometic air-conditioner and the bed area also comes with a wall-mounted Sirocco 12V fan.

Legal requirements concerning the location of the Truma water heater means that in theory it cannot be used when the right-hand window is open – there’s a couple of circuit contacts for that and the gas space heater that are fitted to the window to prevent either being used unless the window is closed. For evening time, well-placed LED light fittings, including semi-concealed strip fittings, place the illumination where it is needed.

There are two wardrobes fitted into the layout. One sits between the end of the dinette/lounge and the bathroom wall and has a cupboard that comes with hanging space and good-sized wire basket drawers. A second wardrobe is tucked into the corner by the entry door.

Given the luton length is around 1.22m (4ft), how do north-south beds fit in? It’s a good question but, quite simply, by day, the single beds are pushed back into the luton peak but at night, the 2x0.69m (6ft 7in x 2ft 3in) beds can be pulled out into the air space above the kitchen bench and the lounge. When pushed back, a simple hook and eye keeps them in position but friction also helps.

For a step, a large folding box step that hinges to the driver’s cab roof between the beds, swings down to make climbing in and out of the beds quite easy. I like this sort of arrangement because it not only makes getting in and out of bed simpler, it is also easier for making up the bed each night.

Most kitchens in a motorhome of this size are quite small but the Vision is one exception to that rule. Built into the kitchen are two drawers and a cupboard that includes two wire basket drawers as well as a few other catering essentials such as the three-burner cooktop, round stainless steel sink, an under-bench microwave oven and an under-bench 136L Waeco fridge. As usual, all the air space above the kitchen bench is devoted to overhead lockers, with the one nearest the door containing the all-important electrical panel.

Opposite the kitchen and under the offside window, the elongated U-shape lounge comes with an oval-shaped table and will seat two people without too much trouble. Both under-seat ends look like they have drawers, as the rear one does, but the front one when pulled out is a highly practical step for getting to the beds.

In the rear wall section, there’s a little bit of compromise with the bathrooom design but not much. A Dometic cassette toilet sits in the rear right-hand corner and the shower cubicle on the opposite side. To squeeze things in, the door frame of the shower cubicle does cross the rear window but that’s not really an issue and it leaves enough space under the window for a wash basin. There’s a shaving cabinet and towel rail are fitted above the toilet.

In standard form, the Explorer Vision comes with a 100Ah battery and charger. However, in this case, optional solar panels and a second house battery have been added and are useful for extended remote travel. The 12V switches, water tank gauges, solar panel regulator, main 12V changeover switches and a 12V socket are found in the control panel by the entry door.

There’s a little bit of compromise built into Explorer’s 4x4 motorhome – mostly due to its size. You might get a larger 2WD motorhome for the same price, but if offroad travel is what you want, then the smaller, HiLux-based Vision is going to be a winner. It’s built for offroad/remote touring and comes fully equipped.

In addition, the bed arrangement is a practical one and makes good use of otherwise idle air space. It’s an innovative design that offers more than the usual small cab chassis-based motorhome interior space and one that works well for its designed purpose.